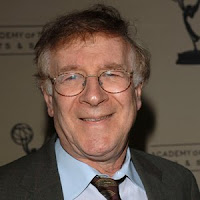 Steve Landesberg is best known to TV viewers for his terrific turn as the erudite and obliquely sarcastic police detective Dietrich on the sitcom Barney Miller (1975-82). In this tribute, however, I want to also celebrate him as a standup comic and a really fine sketch performer.

His obits underlined a bunch of his professional achievements and were focused on the fact that his stated age when he died was 65, but he was really 74, as has now been revealed by his daughter. I think it was quite wonderful that Landesberg was fooling casting agents with a younger age (actresses do it all the time), as he was not the kind of a gent whom you could easily guess the age of anyway.

He started in show business in his 30s, working as a standup and appearing for the first time on The Tonight Show in the early Seventies. I have a tape of an early Seventies Dean Martin Show episode that he appeared on doing his great routine about visiting a small Southern town (where they happily introduce the sole, solitary town Jew to visitors), and he also had regular berths on the short-lived Bobby Darin variety show and the Paul Sand sitcom Friends and Lovers.

I first knew of Landesberg from a comedy LP my dad and I enjoyed called Everything You Always Wanted to Know About the Godfather… But Don’t Ask that featured Chuck McCann as the Godfather and Landesberg and a group of NYC stalwart comic actors (J.J. Barry, Marilyn Sokol, Mike Preminger, Mina Kolb, Dick Lord) playing various parts. The record was written by Mad contributors and folks who wrote for Fernwood 2-Night later on: John Boni and Dick DeBartolo, Ken Friedman, Nick Meglin, and Mike Preminger. Yes, all right, so I fucking loved that record as a kid (I was, and remain, a big comedy record fan).

I became familiar with him from that one-off LP (wherein he did several different voices) and was happy to recognize him on Barney Miller when he showed up for the first time in ’75. Dietrich was a deadpan character who got the show’s weirder conversations going, and Landesberg was perfect in the role.

I met Landesberg in the street when he was walking in the Village with some friends back in the early Nineties, and did have to tell him how much I enjoyed his work on TV and on that old comedy record (his response to that being, “that was a long time ago!”). I didn’t bug him for an autograph or an interview (I wasn’t doing the Funhouse back then), but he was a perfectly nice guy, whom I wish we had seen a lot more of on TV and in the movies. He did get some decent guest roles in his later career, appearing on The Golden Girls and That ’70s Show, as well as scoring a supporting role in the film Forgetting Sarah Marshall, which I had no interest in seeing (but wouldn’t mind checking out his scenes in the pic).

In tribute to Steve L., I offer you a few plum clips and one that I myself added to the YouTube “pool.” First, Landesberg doing a Southern character on a Dean Martin roast of Barry Goldwater:

A panel segment on The Mike Douglas Show with his comedy-club colleague David Brenner:

The first four seasons of Barney Miller are up on YT, thanks to the Crackle folks. Here is a short scene that shows off Landesberg’s deadpan delivery beautifully. In fact, it oddly was linked to in his New York Times obit — I didn’t know the NYT had gotten to that level of interactivity with “illegally” uploaded material!:

Landesberg did very good impressions. Here’s him doing an impromptu Al Jolson (acting Jolie, not singing Jolie), and here is the golden moment on Barney Miller where he did Gregory Peck outta the blue. This scene made an impression on me as a kid, because I had never had seen anyone do a Peck impression (and I think Steve pretty much had this territory to himself). His deadpan carries the whole scene:

And here is my contribution to the YouTube Landesberg library. The track from the Godfather comedy LP that I loved as a kid. It features Landesberg as a crazy German psychiatrist and J.J. Barry as his Mafioso patient:

Thanks to Jim G. of the Vintage Standup Comedy blog for the MP3 version of this album.
Posted by Media Funhouse at 11:20 PM