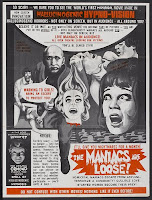 I realize the vast majority of folks reading this blog haven’t seen or heard of the Manhattan cable program I’ve been doing for the past 17 years with the same title as the blog. I definitely recommend you check out the Media Funhouse channel on YouTube and the four complete episodes I put up as representative samples of the show.

I did want to put up a sample of the episode-length Deceased Artiste tributes I’ve done on the show, of which I’m very proud. Thus I’ve uploaded the entirety of my Ray Dennis Steckler episode, which aired a few weeks after the man who gave us Rat Pfink a Boo Boo and The Incredibly Strange Creatures Who Stopped Living and Became Mixed-Up Zombies hit the great divide on Jan. 7, 2009.

I’ve broken the show up into three parts, and uploaded it to Daily Motion, since YT does not tolerate the human body (no nudity please, we’re American and tryin’ ta pretend we’re moral…). The first part of the show includes my verbal overview of Ray’s career, plus some choice clips:


And the third and final part features a few more clips and my farewell, plus a bonus: a short tribute to two other Deceased Artistes who died around the time that Steckler did: Bettie Page and the sacred psycho-billy himself, Lux Interior of the Cramps:


I’m indeed proud of this show (and yes, I did actually sit through Ray’s demented and very unsexy pornography!). I am glad to offer it up to the fine, discerning viewers who like weird and inexplicable cinema.("Incredibly strange" indeed...)
Posted by Media Funhouse at 12:08 AM