The Rise of the Nebbishes: a tribute to Herb Gardner (part 1 of two) 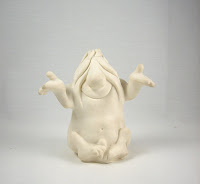 The time, mister... it's not a thief at all like they say; it's something much sneakier... an embezzler; up nights, juggling the books so you don't notice anything's missing. -- from Who Is Harry Kellerman...?

I wish I could speak like a character in a Herb Gardner play. Gardner's people communicate their ideas and feelings in a beautifully straightforward way, which is either funny or heartbreakingly true (often both).

I've been a cultist for Gardner's work since I saw A Thousand Clowns as a teenager. That play and film say more about nonconformity and everyday rebellion than any number of “youth culture” tracts from later eras. It's somewhat odd for a teen to identify with a middle-aged man, but Clowns makes every one of us want to be Jason Robards' Murray Burns (if we aren't already).

Since the Funhouse TV show began in '93, I've paid tribute to Gardner a few times — first with scenes from Clowns and then from his later films (all of which sadly failed at the box office but have developed small but dedicated followings). I've often spoken on the show about Gardner being the “anti-Neil Simon.” Much as I love several of Simon's plays, they work best as comedies (I would set aside the superb Prisoner of Second Avenue from this) and their sentimental aspects are pat and mawkish.

Gardner was an unabashed sentimentalist, but his brand of sentiment was tinged by a rebellion against conformity and a streetwise NYC sensibility, bringing his work closer in tone at points to his friend Paddy Chayefsky than “Doc” Simon (lacking the former's bombast and the latter's taste for easy joke lines).

The only downside of being a Gardner devotee is that he produced a rather small amount of plays and film scripts in a four-decade career — five plays and four film script adaptations of same, one original screenplay, and the libretto and lyrics for a failed musical.

There are a handful of other writings, however, and it's those I want to talk about here (since I heartily recommend you get Gardner's terrific Collected Plays, which is easily found online at vendor sites for books). A Thousand Clowns is always the best intro (the film is currently available in its entirety on YT. Incidentally, why are all digital copies of the film so goddamned dark?). My goal, here, however, is to discuss the out-of-print side of Gardner's work.

There are a handful of uncollected short stories and one acts, but the key item that eluded me until recently is his only novel, A Piece of the Action (1958). Like his plays, the book is semi-autobiographical and to better explain what it's about I first have to explore the singularly unusual phenomenon of “The Nebbishes.”

In preparing this piece, I searched high and low for one source that provided the correct sequence of events. Every obit for Gardner mentioned the Nebbishes and so did every tribute article, but none provided a clear chronology for this seminal period in his life before Broadway.

Given the disparity between the different dates and accounts of Gardner's work on the Nebbishes, I decided the only reliable source is this article posted on the "Fabulous Fifties" blog in an invaluable entry on the Nebbish Sunday cartoons. In the article it's stated that Gardner created the Nebbishes as a cartoon for the Antioch College newspaper. (No information on whether it consisted of one-panel jokes or full cartoons.)

Gardner's initial ambition was to be a sculptor and so, upon graduating college, he worked at a toy company making Nativity scenes (a soul-numbing job shared by the lead character in his play The Goodbye People). He began creating mini-sculptures of these goofy-looking schlemiel figures (presumably the same ones from the Antioch cartoons, although we have no examples of those), presumably doing it for his own amusement.

They became the ticket to an odd sort of fame for him, though, as he scored a deal in 1954 with Bernad [not Bernard] Creations in Yonkers, NY, who not only sold the Nebbish mini-statues he had designed, but also put one-panel cartoons he created featuring the characters on an insane array of “giftware.” 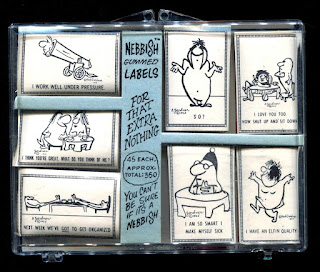 Gardner spoke about the characters in a 1962 interview for The Evening Independent:


“A Nebbish, by definition, is a lost soul,” Gardner said. “People used to think that a nebbish was a slob. No, a nebbish is the victim of a slob. A slob spills things — and the things get spilled on the nebbish.”


“A nebbish,” Gardner merrily rolled on, “always seems to be wearing galoshes. You look down and it's shoes, but you still think he's wearing galoshes – and it's not even raining. A nebbish is a spectacular nobody. When he walks into a room, it's as though someone just left.” He shook his head sadly.

The best-known cartoon (which was indeed featured on all the objects I listed in the last paragraph) is the one you see above. It became a pop culture touchstone again when Paul Schrader included a variation on the line in Taxi Driver (the wall-hanging with the variation seen in the film would appear to have been a Seventies novelty item that ripped off Gardner's concept — if anyone knows anything further concerning this, leave a comment).


The merchandise featuring the Nebbishes were bestselling items for several years in the Fifties. These days you can acquire some of the items for very low amounts on eBay (the postage and shipping costs are 2-3 times the actual price of the item). The mini-statues go for much higher prices, which seems to indicate that they were either thrown away in mass amounts when people grew tired of them, or the soft rubber they were made of didn't age very well.

The most interesting wrinkle is that, in the mid-Fifties, Gardner did segments about the Nebbishes on Shari Lewis's local NYC kiddie show Kartoon Klub. Herb would apparently tell stories about the characters while drawing them on a pad for the kids in the audience and at home. (Also: one of the Nebbish items I bought off eBay proudly announces “as seen in Pageant magazine.” I’m assuming this was simply an article about the merchandise, or the appearance of a one-panel cartoon or two.)

In the meantime, what is most fascinating about the Nebbish gift items is that the cartoons contained on them parallel the work of Jules Feiffer, albeit in a one-panel format (and presented, obviously, in a far more commercial format than a weekly newspaper). Feiffer, in fact, became good friends with Gardner around this time, as he discusses at length in his memoir Backing Into Forward. He got to know Herb after hearing him on the Jean Shepherd show (none of Shep's shows with guests have survived — to date I've only heard of two guests he had on: Gardner and John Cassavetes!). 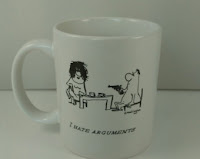 The Nebbishes cartoons communicate the Fifties fascination with psychotherapy and are definitely another manifestation of the “sick humor” being practiced in the comics of Harvey Kurtzman and Feiffer, and in the standup of Berman, Nichols & May, Winters, and, of course, Lenny Bruce. Gardner's one-panels – which he joked were on “just about every white surface but surgical masks” – obviously anticipate Woody Allen's humor as well. (At that time, the perfect Nebbishes were Arnold Stang and Funhouse deity Wally Cox — the latter was the direct predecessor to Woody, because he was indeed allowed to “get the girl” on Mr. Peepers.)

The gags still work, but what is more fascinating is the copy that appears on the products that attempts to “explain” the Nebbishes. There is no verification that Gardner himself wrote this copy, but it's amazing that the Bernad company went right ahead and joked that the gift items had no real purpose, and the characters depicted on them were total losers (who happened, granted, to be cute and cuddly — there had to be some reason for people to buy the stuff!).

Thus, a person in a card or gift store would read advertising copy like this: Congratulations! You are about to take into your home the one thing more useless than a parakeet... the Nebbish. For a better understanding of the Nebbish, its care and feeding, we suggest you take note of the character analysis within.

Today the Nebbish, while never a leader of men and not quite suited to the debonair role, still runs on with the human race, wearing his galoshes. He is ever with us: stalwartly nebulous, zealously unaware, eyes forever fixed on his own fuzzy star.


The neurotic, self-loathing side of the Nebbishes was eliminated from the later version of this “giftware” phenomenon, namely the figurines from the Paula company (pictured to the right) that were obnoxiously sentimental. These little statues haunt my memories of visiting card stores and five & tens in the Seventies.

By the late Fifties, Gardner could apparently write his own ticket with the Nebbishes, so he eventually took them back into the cartoon realm in 1959. He did full strips for two years, crafting very neurotic comedy, clearly drawing on the twisted humor of Krazy Kat and Pogo, without using anthropomorphic animals (the Nebbishes look more like cavemen and women).

Thanks to three extremely generous bloggers we now have copies of some of the Nebbishes strips, since they never were collected in a book. It's definitely free-wheeling stuff that foreshadows the fixation Gardner's theatrical characters have with vaudeville, dixieland, and old-time entertainment.

The first blog entry with scans of Nebbish cartoons can be found on Allan Holtz’s “Stripper's Guide.” Holtz clarifies that the strip began not in 1954 (as claimed by so many cartoon websites) or '55 (as claimed in the bio on the dust jacket of Gardner's Collected Plays), but in January ’59 as a Sunday-only comic. It was distributed through the McNaught Syndicate until January ’61. See Holtz’s entry here.


Mark Kausler’s “CatBlog” does us Gardner-ites the favor of seeing scans of Mark’s original paper copies of five strips. He also proceeds chronologically, so we can witness Herb introducing the characters to his readers. Interestingly, Mark compares the Nebbish characters’ contemplation of “truth and beauty” to Dobie Gillis, thereby introducing the specter of the late, great Max Shulman (whom I wrote about here).

Mark’s entries also show that Herb was credited as “Hy Gardner” — which is strange, given that a nationally famous newspaper columnist of the day had that name (it’s particularly odd, given that Herb signed “Herb Gardner” in the cartoons themselves; one assumes someone from the syndicate screwed up). Being a diehard fan of print publications, I am always happy to see a non-touched-up, non-“restored” copy of something that appeared in a newspaper, so I urge you to check out Mark’s Nebbishes collection here, here, and here.

The mother lode of Nebbish-mania comes via Ger Apeldoorn’s “Fabulous Fifties” blog. Apeldoorn has also scanned his own copies of, count ’em, eleven original strips. His collection can be found here.

Gardner often remarked that he realized he had to move on from cartooning when his dialogue balloons took up more space than his characters did. His forte as a writer, most certainly, was dialogue, and so he moved into playwriting.


But, discounting a few one-act plays and a short story published in an anthology of college writing, he had only one previous piece of published prose writing. I'll focus on that work, his novel A Piece of the Action — which is very definitely a nightmare take on what could've happened with the Nebbishes — in part two of this piece.
Posted by Media Funhouse at 6:40 PM