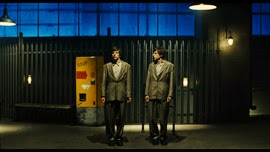 Posted by Media Funhouse at 12:45 AM No comments:

‘The song is ended, but the melody lingers on...’: Deceased Artiste Bob Hoskins

Bob Hoskins was one of those special performers who didn't ever look like he was “acting.” He was not a chameleon – he rarely wore elaborate costumes or makeup, he basically looked the same in every role. But there was something about his “every-bloke” appearance and charm that made him the most talented of “artless” actors.

His death last week at 71 was sad but it wasn't that big a surprise, as he had retired from acting in late 2012 because of the onset of Parkinson's disease. What struck me when he retired was that I had really, really loved his work and yet hadn't seen a thing he'd done – and Hoskins was a guy who kept on working, no matter – since the male tearjerker Last Orders back in 2001.

Some of the later items look particularly good, like the British TV series The Street or the film Made in Dagenham, but all too often Hoskins was either in a small role or the film was just too goofy – as with the Jamie Kennedy comedy vehicle Son of the Mask or the last film Hoskins appeared in, Snow White and the Huntsman.

So, having confessed that I have no knowledge of the last decade of Hoskins' work (aside from his supporting roles in Beyond the Sea and Paris, Je T'aime), I want to honor him for all the work that came before that. Americans who only watch mainstream multiplex stuff knew him best for Who Framed Roger Rabbit?, Hook, and really, really bad crap like Mermaids, Heart Condition (where he's a detective haunted by dead cop Denzel Washington – fuck, it's bad), and Super Mario Brothers (which Bob said was indeed the film he liked the least of anything he'd ever done).

Better remembered by those who watch British film and television were Hoskins' early supporting roles in things like Dennis Potter's “Schmoedipus” (the source for Track 29) and Rock Follies of ‘77. I also have a major fondness for John Byrum's Inserts, which was a major flop but was a well-acted small ensemble piece that featured Bob as a gangster.

And there were the films he was so memorable in: Dennis Potter's beautiful miniseries Pennies from Heaven, The Long Good Friday, The Cotton Club, Brazil, The Lonely Passion of Judith Hearne, Twenty Four Seven, and of course Mona Lisa.

Hoskins didn't become an actor until he was in his late 20s, when he accompanied a friend to an audition and he was asked to audition as well. Prior to that, he had worked as a porter, a truck driver, and a window cleaner. You can see examples of his early work online, including the 1974 sitcom Thick as Thieves (right), which is up in its entirety.

One of the most entertaining segments featuring a younger (read: early 30s) Hoskins is an educational show about adult literacy called BBC on the Move, which aired in the mid-'70s. The show is the kind of earnestly sincere educational fodder that was lampooned so well in the series Look Around You; it also has the feel of the Children's Television Workshop programs done over, albeit redirected to an adult audience:


A fun example of Hoskins doing comedy is this sketch from The Ken Campbell Roadshow:

He proved himself more than equal to tackling the Bard as Iago in Jonathan Miller's 1981 TV version of Othello, in which he starred opposite Anthony Hopkins:

As the years went on and he became phenomenally successful, he became an easy target for impersonators, as seen here in sketches from The Peter Serafinowicz Show and The Adam and Joe Show.

Here is the real Bob, on The Gaby Roslin Show talking with fellow guest Ian Dury about their work together on one of two films Hoskins directed, The Raggedy Rawney, as well as Dury's thoughts on being disabled and Hoskins inability to understand Ian's Cockney rhyming slang:

The film that made him a star on both sides of the Atlantic was The Long Good Friday (1980), a terrific gangster picture. The conclusion of the film is online and it shows Hoskins at the top of his form. The segment starts off with him telling off two American Mafiosi (one played by iconic tough guy Eddie Constantine), shutting up one of them by referring to him as “you long streak of paralyzed piss.”

The beauty of the sequence (cheesy electronic music excepted) is the final moment in a car where Hoskins delivers a number of emotions in a close-up. It’s a masterclass in how to shift from emotion to emotion, seeming genuine all the way.

His next big knockout of a film was Mona Lisa (1986) for which he won the Best Actor award at both the Cannes Film Festival and the BAFTAs. It’s a beautiful Neil Jordan picture where he is teamed with the earlier iconic Cockney tough-guy, Michael Caine.

The critical and popular success of the film enhanced both Jordan and Hoskins’ careers, leading in Bob’s case to two more films with George Harrison’s Handmade Films (The Lonely Passion of Judith Hearne and the first feature film he directed, The Raggedy Rawney). The full film is here:


A decade later, after having made several big hit films, including Roger Rabbit, Hoskins received rave reviews for his work in another low-key character study, Twenty Four Seven (1997). If only he could’ve made many more films like this one:

Last Orders is a very special film, in that it has an unspoken connection to the past of British cinema, as its incredibly talented ensemble of lead actors blends actors known for their work in the Sixties (Michael Caine, David Hemmings, Tom Courtenay) with the two actors who most exemplified the “working-class” Brit in later films (Hoskins and Ray Winstone) as well as one of British cinema’s classiest ladies (Helen Mirren, who began in the Sixties as a sexy “dollybird” in movies).

It’s a wonderfully elegiac film that I’m very glad to have seen with my own dad, given that it is about memories of a father.

I want to close out on the one item that showcases Hoskins’ talents like no other, Dennis Potter’s Pennies From Heaven (1978). I am an obsessive fan of Potter’s work and have found that it only gets better as the years go by. Hoskins was nothing short of perfect as Arthur Parker, the sheet-music salesman who believes that popular songs have all the answers to life’s problems.

The lip-synching technique that Potter had his actors utilize in Pennies, The Singing Detective, and Lipstick on Your Collar is sublime here. We see how the characters’ lives “light up” when they’re caught in the world of the song, and how the bleakness of the real world returns just as soon as the song is over (but they act out the tunes in their natural surroundings, something that was switched around for the Herbert Ross feature film made from the material).

Check out Bob dancing up a storm in this number:

Potter’s signature song (used in several of his teleplays) is heard here, as Hoskins gorgeously acts it out. The delicacy he affects (as he lip-synchs to a female vocalist) is exquisite and serves to underscore the optimism of the lyrics:

And there is no better way for me to end a tribute to Hoskins than by presenting the finale of Pennies, in which a Threepenny Opera ending is introduced, because we so want these sad, ill-fated characters to get together. Arthur literally is “resurrected” to recite with Eileen (Cheryl Campbell) the song lyric that I used as the title of this piece. Then the two dance off to “The Glory of Love.”

Farewell, old son, and thanks for the memories.

Posted by Media Funhouse at 6:11 PM No comments: