Where have you gone, Donut Man?

I've had a few Easter traditions on the Funhouse TV show, for my “Easter blasphemy” episodes. One of the most bizarre (recommended many years ago by friend Bob Fingerman) is “The Donut Repair Club,” an ongoing series of cwazy Kwistian kiddie videos.

Funhouse viewers are well familiar with the concept behind these vids, but for those who are unaware: Rob Evans, “the Donut Man,” tells children that “life without Jesus/is like a donut/'cause there's a hole in the middle of your heart.” Thus, you must fill your donut... er, heart and put Jesus right in there. The “repair club” thus literally “fix” donuts by putting munchkins into the center of the holed pastries; metaphorically they fill kids' hearts by sticking Jesus in there.

A lot of Donut Man clips are now on YT, but years ago I uploaded an “introductory” bit from the very first Donut Repair Club video:


Evans' tapes came out on a regular basis in the Nineties, and a daily TV show was spawned out of the concept. I have wondered every so often when I revisit his tapes on the show: whatever happened to the Donut Dude? Thankfully, the Internet holds the answers to most trivia questions, and thus I am happy to learn that Rob Evans is still convincing children to fill their holes [insert highly inappropriate joke *here*], while he also has a day job as a home builder (presumably a contractor).


This article gives Evans' back story and explores his attitude towards his music. It's fascinating to know that his journey toward finding Christ began when he was experiencing the “drugs and rock and roll scene of the '60s and '70s.” This is reflected by some of his songs – he has one that duplicates “Maxwell's Silver Hammer,” and another song seems incredibly reminiscent (read: the melody is identical) to Buzzy Linhart's “Friends.”

The interviewer declares Evans' Donut Man to be “an almost Christ-like figure” in comparison to other children's Xtian entertainers. For his part, Rob lets us know that the musicians he played with on his Donut Man recording sessions were noted session men in the mainstream music industry. A bassist who played with him has also worked with Barbra Streisand, Stevie Wonder, and Madonna. The producer for his Donut Man albums later produced a Star Trek soundtrack and the score for Pixar's Up. One of his drummers also worked with Phil Collins. 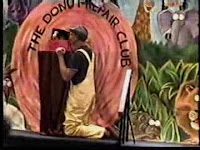 The Donut Man's biggest step was his conversion to Catholicism. He notes that he did it because he believes that communion “isn't symbolic,” it's really happening. (The cannibalistic, blood-drinking portion of Catholicism always fascinated me when I was back in Catholic school, realizing that there are those who want to “drink the blood” of their deity....)

Evans and his interviewer discuss whether Catholicism is Christian... or even Catholic. (That part puzzled me a little. As much as I escaped the church, fleeing for my sanity, I would readily admit that the Catholic church is indeed very Catholic – with an uppercase “C.”) Says Donut Man: “To the degree that the Catholic Church is idolatrous, it’s not Christian so it’s really not Catholic.”

On that interesting theological point the interview fades away, with Evans noting he does 80 to 100 gigs a year. I found his Facebook page, and yes indeed, the Donut Man does still tour his act and involve local children in loading up them holes. He also is a granddad (he and his wife have been married since he was 20 years old and he's now well over 60).

Perhaps the oddest note on his Facebook “Like” page is that one comment (posted a few weeks back, on March 9) comes from a white-power person (who claims to be a Japanese soldier who fought in WWII) who argues that Evans' act is “a plot by the Jews.” It's an interesting addition to the page, which otherwise is all about brotherhood, love of Christ, and Evans' performances and love of family. Perhaps the people running his page don't realize there is a “delete” command on FB?

In any case, the Donut Man is still with us, still preaching to the youngsters about filling their holes with Jesus. What more can one ask for from a gent who openly admits his character's “costume” was inspired by “Mr. Greenjeans” on Captain Kangaroo?

A few extra clips... The one black girl in the group does a rap number about Christ.

A country-fried tune about the prodigal son.

And one more bit of exposition, explaining the donut-repair metaphor. Fill those holes, chillun!

Posted by Media Funhouse at 6:47 PM