It is the mid-1950s. A disheveled middle-aged man comes out in a swallow tail coat. He is here to deliver a lecture, but realizes he doesn’t have the text of his speech. He searches for it, taps his pockets, looks in his coat, glances around to see if he dropped it… and then says, “HOWEVER….”

November 2004. A very old gent, 90 years of age, comes out onstage in a swallow tail coat, looking like he woke up in the damned thing. He’s beyond disheveled, but he’s here to tell us something. He suddenly realizes he doesn’t have his speech. He taps his pockets, looks in his coat, glances around to see if he’s dropped the text, and… “HOWEVER….”

The one thing that struck me the most about Professor Irwin Corey’s act is that he “aged” into it. He was always funny, but a middle-aged man being a crazy lecturer isn’t anywhere near as funny as a 90-year-old man doing the same act, and coming out with the same improvised nonsense. When the middle-aged Corey did it, it was radically weird — the end of the act I’m describing above (at least on the Steve Allen Show on which I have him doing it) is that the Professor would run into the audience and the show’s crew members would pursue him with a butterfly net.

As a very old man doing the bit, though, he was the “voice of wisdom” — except his wisdom made no sense, and was thus a perfect spoof of academia and the notion of a “public intellectual” (a real, actual phenomenon we used to have in this country, smart people who would hold forth on news and talk shows about smart things!). As the Internet has crushed all our attention spans and made us prone to loving small bits of digestible but pointless information, Professor Irwin Corey became a comedian whose crazy, rambling lectures truly suited our culture.

His early life was rather amazing and was discussed in his obits: born as one of six children, he wound up in an orphanage (his parents couldn't afford to feed him and his siblings). From the age of 13 onward he was on his own, traveling the country, then toiling for a public work relief program (where he became a featherweight champion boxer) and the Int'l Ladies Garment Workers Union. His work in the union's show Pins and Needles in the late Thirties spurred him on to the career in show biz that he pursued for the next 80 years. It also cemented his eternally Progressive political stance.

Irwin was not the only family member to pass the century mark. In researching this piece, I found an article on the York Daily Record site (a newspaper in York County, Penn.) about his sister Thelma. She was a professional dancer who, in 2009, celebrated her 100th birthday. The article can be found here.

A lot of tributes online have linked to YouTube clips, but I wanted to explore an earlier adventure in the Professor's career. In December 1944 (the year after he appeared in the New Faces of 1943 show), he appeared on a few episodes of The Chase and Sanborn Hour, hosted by Edgar Bergen and his little wooden pal Charlie McCarthy. 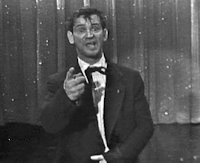 Edgar needs a tutor to teach Charlie (it wasn't clear what), and the gent recruited is the Professor, who was already being called “The World's Foremost Authority.” It's fascinating to hear Corey at this point because he's formulating the character, who has a somewhat British accent. (And his voice is quite high – but, then again, Corey is only 30 years old!)

Two of the episodes with Corey as Charlie's tutor, in which the Professor does what seems to be his own material, are available online. In the first, Corey compares L.A. to NYC — when asked if it's hard to get around NYC, he responds, “Any taxi driver will tell you where to go… and they usually do!” In the second episode he gets his own segment, lecturing on the future and electricity (and, again, it sounds like his own material and ad-libs).

I never spoke to Irwin one-on-one or interviewed him, but I saw him perform in a few unique circumstances. The Nov. 2004 gig I mentioned above took place at Lehman College in the Bronx, when a show called “The Comedians” played in their auditorium. This particular show was traveling around the U.S. at the time, and its roster was quite impressive: The Professor, Bill Dana (subbing for Louis Nye, who wasn't well), Mort Sahl, Shelley Berman, and Dick Gregory. The host was the “baby” of the bunch in terms of age, Dick Cavett.

The Professor kicked ass at 90, but even more impressive was what occurred at an April 2014 screening of the documentary Irwin and Fran at the Anthology Film Archives.


Corey was a mere kid of 99 (!) at the time. He had agreed to do a Q&A after the picture, but he wound doing what amounted to more than 20 minutes of standup comedy from his wheelchair. Members of the audience kept asking him serious questions, but I was very happy to throw him a “straight line” after he asked us, “Any more stupid questions?” 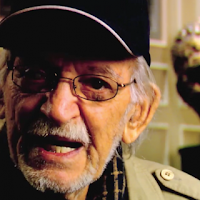 Feeling that he did not want to answer any more queries about the film — which is a very touching portrait of the relationship between Corey and his wife Fran, who were married for 70 years until her death — I asked about his sex life. He responded with a line that he attributed to George Burns, likening senior-citizen sex to “trying to shoot pool with a rope.”

The audience was amazed at the energy coming from the Professor. He was pretty much unable to hear anything by that point (his son was repeating the questions to him, in a louder tone of voice so he could hear them) and he was indeed wheelchair-bound, but he was “on” and in the mood to do his shtick. And he was *very* funny.

By comparison, at his 100th birthday celebration, held at the Actor's Temple, he spoke but only for a few minutes and with none of the gusto that he had at the Anthology event. I'm assuming he was exhausted by the proceedings, in which he was being surrounded by people and praised by numerous folks at the mic.

I feel the only way to end this piece is to showcase Irwin's best performance in a film. He had done serious acting since he was a young man and had many credits in “legit” theater, but his movie roles were mostly supporting parts that were pretty silly (as with his “mystery man” character in Car Wash). That was not the case with Herb Gardner's Thieves (1977), directed by John Berry. 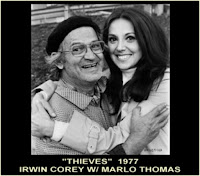 Irwin had played the role of Joe Kaminsky, the cabbie, in the Broadway production of the show, and repeated his performance in the film. It's a beautiful turn, mostly because he's playing a cartoonish character who is simply a note of “local color” for a lot of the film, until we reach a beautifully written scene in which he talks to his daughter, played by Marlo Thomas.

I've rhapsodized before about Herb Gardner's writing on this blog — you can check out an entry on his Nebbishes cartoon and merchandise here and his long out-of-print novel and short stories here. Gardner wrote a kind of urban poetry, and his dialogue transforms his comedies into these sublimely rendered character studies of folks in middle-age (with some unforgettable senior characters in the later plays).

I remember that Frank Rich — the lousy, *horrible* movie reviewer (he hated every great movie of the mid-Seventies) who then became a very influential theater critic and is now a political pundit (?) — trashed Thieves and, in particular, loathed Corey's performance. As he always was, Rich was wrong about the film, and the Professor — I find this scene beautifully scripted and just wonderfully acted by Thomas and Corey. (Note: I uploaded the clips seen below, including the eight-minute scene in question. The sound is only active on one channel, and the titles come from the episode I did on Thieves back in 2014.)

Since the Professor's act consisted of nothing but surprises, given his talent for ad-libbing, I think the biggest surprise was that he was a very talented character actor as well….

Thanks much to Max Schmid — host of a very long-running show about old-time radio on WBAI (check out his FB page here) —  and Stephen K. for help in uncovering the Chase and Sanborn shows.
Posted by Media Funhouse at 1:13 AM