A visit to the National Great Blacks in Wax Museum 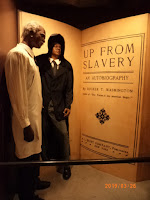 The second museum in Baltimore that I’d like to salute is a very sincere one that is, by turns, educational, entertaining, and inspirational. The National Great Blacks in Wax Museum (surely one of the best musuem names in the country), located at 1601-03 East North Avenue, has a website that can be found here.

Wax museums are usually fascinating time capsules of the period in which they were created. In the case of BiW, it is not an ordinary wax museum focused on the entertainment industry or mainstream historical figures. It presents instead a history of African-Americans from slavery to the civil rights movement, with sidebars on art, celebrity, entrepreneurship, and the even the Presidency.

On first entry, you see a series of tableaux about slavery. These scenes are disturbingly realistic and must be seen in person. One less disturbing but still fascinating tableau illustrates one way that slaves were helped to get onto “the underground railroad” – via stoves with fake backs that led into other areas. (A recorded narration emphasizes for those who are unaware that the underground railroad is only a phrase – these methods for slaves to escape involved neither a railway nor were they underground.) 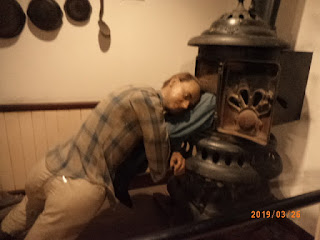 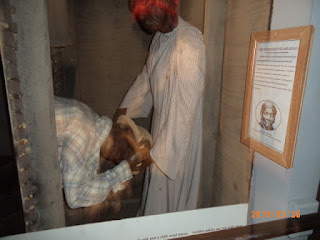 African-American legends are depicted in the center of the main floor. Several icons and trailblazers from the worlds of literature and sports, among many other fields, are featured.

On the second floor one encounters more black game-changers. There are also menacing tableaux like this one. 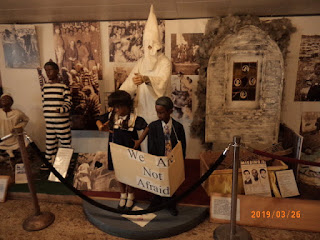 Traditional wax museums set aside an area for “horror” exhibits. In the case of BiW, the horror is all too real, since the basement is devoted to the horror encountered by African-Americans. Thus, we see documents (news clippings, photos) concerning, and tableaux depicting, lynching, medical experiments involving black citizens, and the nightmare murder of Emmett Till.

I won’t show these images – adults need to see them in person (kids are not allowed in the basement exhibit) – but I can guarantee that anyone who thanks of wax museums as “hokey” or for entertainment purposes only will be extremely sobered by the basement in the BiW museum.

The final hallway contains important figures in Black history including, of course, civil rights icons. One person had seemed to be missing, though – but I should’ve known better. Dr. King is the final figure one sees as one leaves the museum, which provides a perfect counterbalance for the grim history recounted in the opening hall.

The National Great Blacks in Wax Museum is worth your time if you’re traveling to the Baltimore area. Check out the museum’s website.
Posted by Media Funhouse at 5:44 PM No comments:

In Every Dream Home: the ‘Parenting’ Exhibit at the American Visionary Art Museum

It’s been a while since I’ve had the time to devote to this blog, but I’ve wanted for several weeks now to put up another Funhouse travel piece. In this case the subject of discussion is a museum in Baltimore, Maryland. (If all goes according to plan there will be a companion entry to this piece about another unique Baltimore museum soon.)

I was in Baltimore for a work conference some weeks ago and had been told to visit this particular museum — I was not disappointed. I present a short write-up here and some photos I took but, as always, the pics can only provide a cursory idea of what the museum is like.


The institution deserving of your time and attention is the American Visionary Art Museum at 800 Key Highway (“at the base of historic Federal Hill”); the museum’s website is here. Like many cult-movie buffs, I identify the city of Baltimore with John Waters. The Visionary Museum underscores this connection, as there are not just one but two tributes to Waters’ stars on display; the gift shop called “Sideshow,” which is *heavily* recommended, contains, in addition to a sublime collection of kitsch and oddball artifacts, exclusive Waters-related items from official Dreamland photographer Bobby Adams.

At first I was apprehensive about the museum, as the dreaded phrase “outsider art” has been used to describe its contents. I have big problems with this phrase because it has become a money-making “brand” for certain thoroughly unctuous individuals who take advantage of often mentally impaired artists and performers for profit — and the right to be claimed as the one who “discovered” their work.

I’m happy to report that the museum — which has clearly been curated with both love and a sense of humor — is very respectful about its presentation of the art. In other words, some of the items on display are very amusing (many on purpose), but there is also a sense of sincerity about the place that contradicts the “outsider” label.

This is best reflected in the exhibition “Esther and the Dream of One Loving Human Family” by Polish Holocaust survivor Esther Nisenthal Krinitz. Her simplistic, handmade embroideries truly do move the viewer, as the subject is what happened when she (at 15) and her sister escaped being put in a Nazi death camp and wound up surviving the occupation. In this case the perspective is that of a young person, so her simplistic, untrained approach to art underscores the raw emotion of the situations depicted.

The museum currently has a wonderful exhibition on called “Parenting: An Art without a Manual,” now through September 1. If you are going to be anywhere near the Baltimore area in the next two months, I heartily urge you to check out this exhibit, as it says more about the American family than any amount of “reality TV” and several bookcases’ worth of self-help books. Plus, it’s more colorful.

The show features several striking images of kids and many more of parenting. The pieces on kids deal with idealized notions of parenting and the neurotic reality that lays within. Alex Grey’s psychedelic paintings in the entryway to the museum are among the most wonderfully loopy that I’ve seen, since one of them depicts “visible body” parents admiring their child, who seems to be a sort of space-Christ figure. (I believe the artist’s intention was to depict the “aura” of the figures in the painting, but the “visible body” aspect is the first thing that hits the eye.)


Some of the items in the exhibit present the feelings of those who are – to put it mildly – ill at ease with their family. We thus see imagery representing twin family trees by Robert Belardinelli. First the ideal one:


And then, let’s say, a more realistic view of matters:

More stirring are these reflections on childhood by artist Robert Sundholm. His stuff speaks volumes:

Two of the most unforgettable pieces are conveniently situated right next to each other in one of the main rooms. Artist Bobby Adams (yes, the same gent who has worked for John Waters) has put together a family scene that offers a grim view of conventional domesticity:

The most disturbing item on display, though, comes in the form of that most wholesome of toys, the dollhouse. New Orleans artist Chris Roberts-Antieau created an idyllic little house and then situated in it a real-life family murder case. Depending on the way that one views the house, one’s eyes either light upon the ultra-grim contents of the living room first or, in my case, last.


The latter is, of course, the most disturbing way to view the piece, as it reveals the “punchline” — that this happy house was where, in 1971, New Jersey’s John List killed his entire family and placed them in sleeping bags in the living room (except his mother, who was apparently too obese to be moved from her room).


To add to the dark aspects of the piece, one learns about the murders from a discursive series of notes, handwritten on legal-pad paper by Roberts-Antieau. After reading this, one realizes that one figure is intentionally missing from the piece — List himself, who destroyed all photographs of himself in the house. List was caught several decades later and died in prison.

Again, if you’re thinking of a road trip and are looking for a well-curated selection of art you won’t see anyplace else, visit the American Visionary Art Museum. Preferably before September 1....
Posted by Media Funhouse at 6:58 PM No comments: