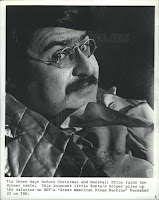 You never quite forget the things that blew your mind as a kid. It could be real-life experiences or things in the media that seem not to follow the rules and speak directly to you. As a Catholic school student who was losing the faith pretty quickly in my grammar school years, one such experience was the oddball children’s show Marshall Efron’s Illustrated, Simplified and Painless Sunday School. It was a wonderfully off-kilter comedy show that retold stories from the Bible, but in a gloriously threadbare, gag-filled manner.

The show was the brainchild of two great comedy writers: Alfa-Betty Olsen and her partner, the late, great Marshall Efron, who died at 81 three weeks ago. Efron seemed to be everywhere in the early Seventies — or maybe it was just that he inhabited “the cool places” on television and in the movies. In the Sixties, he had come to the attention of comedy fans in NYC on a radio station that VERY sadly left the airwaves around the time that Marshall died, WBAI-FM, which was part of the fabric of our lives here in town. (I can personally list several important life-changing moments I heard on WBAI, and the importance of its shows to friends and my father; the station's local programming has been supplanted for the present by national Pacifica shows.)

Once Marshall jumped into the movies (after appearing in a NYC-shot short with a then equally-unknown Charles Durning, found here), he played a number of small roles in memorable pictures that were part of the “maverick” movement of the early ‘70s. The first of these titles was Robert Downey’s wonderful absurdist comedy Pound, in which every character is a breed of dog in human form. It’s one of those films that could only have been made in that time (1970) in that place (NYC) with a killer cast of character people and a truly deviant theme song. 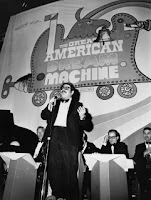 The most celebrated film Marshall was in at that time was George Lucas’ feature debut, THX:1138 (1971). He also had a supporting role in the well-remembered drama, starring Robert De Niro and Michael Moriarty, Bang the Drum Slowly (1973).

While he was playing supporting parts in films, Marshall was also doing regular segments for the legendary (and still terrific to this day) PBS series The Great American Dream Machine. Although the show lasted only two seasons (1971-73), it was a phenomenal creation that mixed short documentaries with smart comedy sketches, song and dance segments, animation, and short comedy films — all created by top talent in their respective fields: Albert Brooks, R.O. Blechman, the Alvin Ailey dance company, Kurt Vonnegut, and… Marshall, in segments co-written by himself and Alfa-Betty Olsen.

Marshall’s segments on the show are priceless. Some were more generic “lectures” on absurd topics:

But most of Efron’s contributions were “consumer guide” segments, in which he would compare similar products — usually to show how awful some (or most) of them were. Or he would prepare a meal:

After he was involved in the ‘70s comedy “boom,” Marshall remained busy and duly employed by doing a number of cartoon voices in the Eighties. He participated in several high-profile cartoon shows as a voice talent, and thus his friendly, bizarre range of voices is probably rattling around in the heads of those who were kids during that era.

I’m a bit older than that generation, so I have strong and very affectionate memories of Marshall’s Seventies Sunday School series, about which there is little info on the Net. I’d like to rectify that by making available two episodes on the bottomless pit that is YouTube and providing brief quotes from one of the more prominent articles that was written when the show was on the air (which is cited in various places as ’73-’77, but a complete list of episodes is available nowhere online). 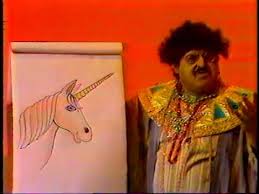 The Sunday School was a national show, produced by (oddly enough) CBS News. It was an odd amalgam of a children’s educational show (a playful one — along the lines of the recently formed Children’s Television Workshop) and the great no-budget cult shows like Soupy Sales’ many programs and Uncle Floyd’s local NJ/NY show. Efron performed stories from the Old and New Testaments as a one-man cast, playing all the roles. He used costumes, makeup, props, mannequins, illustrations, odd backdrops, stock music and footage, and state of the art special effects (which were top of the line for a low-budget show in the mid-Seventies).

The show was generally intended for younger viewers, but it also was a lot of fun for adults. I originally saw the series when I was a kid in the Seventies but was lucky enough to catch it again in the Eighties, at the time I had (finally) scored a VCR. It was then I realized why I remembered the show so fondly — firstly, because it was so charming, and secondly, because it was indeed filled with oddball references that Efron would toss into otherwise pretty faithful retellings of Biblical tales. For instance, the moment in the video below where he has the Jews in Exodus declaring “Oh, show us the way to the next waterhole, oh don’t ask why...”

The show is beloved by those who remember it, but it apparently didn’t gather all that much attention when it first appeared. By 1975, though, it had acquired enough of a viewership to be written up in an article in TV Guide where veteran writer Neil Hickey made note of how sporadically the show was appearing on the air:

Hickey discusses the show’s audience, saying that “Some of the most enthusiastic responses have come from the Bible belt. A number of orthodox Sunday schools time their own classes so that the children can watch the show as a group and then discuss the Bible stories afterward. Other church groups ask CBS for tapes of the show.” (ibid)

Hickey punctuates the piece with quotes from Alfa-Betty Olsen (apparently he spoke to her but not to Efron). “Says Alfa-Betty, ‘We have no ax to grind as regards doctrine. We treat the stories as stories without trying to make any doctrinal point. And we’re very careful not to alter the substance of the stories. We try to find new, fresh ways of telling them.’ Olsen and Efron admit that neither of them is a church-goer, nor even noticeably pious. But both are fascinated by the Bible’s art, lore and drama.” (ibid)

I’m very happy to share these two episodes of the Sunday School with fellow fans. I recorded a scant few of these shows, and these are two that work on their own (at one point, Efron did the story of Joseph and the Coat of Many Colors for something like three shows). It may or may not work for today’s youngsters, but for those looking for even more evidence that the early Seventies were a very wild time in the media, this show fits the bill.

The first episode features the story of the Exodus and Zacchaeus the tax collector. The second contains the story of King Solomon’s wisdom (you know, the bit about cutting the kid in half) and the “parable of two debtors” (with a film piece about the twelve apostles that is definitely the most normal thing on the shows).

Fare thee well, Marshall. You were a better religion teacher than I had in 12 years of Catholic education….
Posted by Media Funhouse at 1:12 AM

I watched Marshall Efron's Illustrated, Simplified, and Painless Sunday School whenever I got the chance. Yet I didn't find out about his death until tonight.