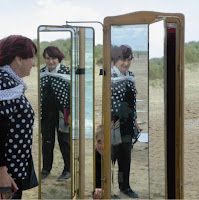 In 1970 Varda’s film Nausicaa was considered unairable by ORTF, the network that commissioned it, and so we have only a rough cut of the film to view. It is available to be seen on the Rarefilmm site.

It’s a blend of documentary and fiction that is very much the sort of film being made by “radicalized” French filmmakers of the time — this mixture was used wonderfully in two brilliant, controversial films, Sweden’s I Am Curious (Yellow) (1967) and Makavejev’s WR: Mysteries of the Organism (1971). The rough cut of Nausicaa definitely could have used additional editing, but it appears to be a finished work, albeit without credits.

The film is Varda’s most overtly political, concerning the military dictatorship of “the Colonels” in Greece in the Sixties; she referred to Nausicaa as a “settling of accounts” with a “fascist” government. Varda reconnected to her Greek heritage here (her father was Greek), as she did in her short “Uncle Yanco” (1967). Talking heads, including Vasilis Vasilikos (the author of the novel Z), speak about being exiled outside of Greece.

Meanwhile, a fictional plot involves a Greek journalist staying at the apt of two roommates named “Agnès” (France Dougnac) and “Rosalie” (Agnès’ daughter’s name; played by Myriam Boyer, from Jonah Who Will Be 25 in the Year 2000). As with Lion’s Love, the film is a time capsule of the late Sixties that is valuable for its glimpse at Varda’s politics. One rather timely reflection on military policy is passed on when a character intones that “torture is politics in another form.”

In the book Agnès Varda: Interviews (edited by T. Jefferson Kline, University Press of Mississippi, 2014). Varda speaks in a 1975 interview with Mireille Amiel on the matter of Nausicaa: “We shot the film… But in 1970 France sold a lot of Mirage planes to the colonels, so… The film was never broadcast on French TV. There were invitations from festivals but the film was never sent. No one ever wrote to me about its status…. They paid me, but I didn’t have the rights to the film…. That was the only time I’ve been politically censured.” [p. 72]

Varda’s only fiction film in the Seventies was One Sings, the Other Doesn’t (1977), which I will review upon its upcoming re-release on Criterion. One of her most interesting credits from this decade was her credit on Last Tango in Paris (1972). She wrote the French dialogue, which means that she refined the initial dialogue between Brando and Schneider (which Marlon altered and dropped, in place of his own, errant remarks) and between Schneider and Jean-Pierre Leaud, who plays a wonderful satire on a New Wave cinephile-filmmaker who is not attentive to his girlfriend (and future wife).

The very small in scope fiction film Documenteur (1981) was based on her experience of living alone in L.A. (while her marriage was to Demy was broken up) with her son Mathieu. It is available in the U.S. on the Eclipse/Criterion box set Agnès Varda in California. I reviewed the contents of the box here on the Disc Dish website.

Varda’s last two movie masterpieces delved into homelessness and loneliness. The first is the superb fiction film Vagabond (1985), with Sandrine Bonnaire as Mona, a hitchhiking drifter who is found dead at the film’s opening.

In an interview with Francoise Wera in 1985, Varda outlined how she devised the film: “I went to scout out the terrain, if I may put it that way. I picked up hitchhikers, I hung out at the train station, I went into some of the homeless shelters at night, etc. One day I picked up a girl hitchhiking and she was so extraordinary a character that I began to realize how much more interesting it is to see a girl hitchhiking than a guy…. It presupposes more physical courage, more endurance, more guts, a greater capacity to say ‘up yours!’ to people, and that kind of thing.” [ibid, p. 120]

Varda uses a documentary frame for her drama — a device that has now been done to death in “mockumentary” sitcoms but was more unique back in the Eighties. We hear from people who have encountered Mona (Sandrine Bonnaire) and have distinct opinions about her, emphasizing one of the film’s unspoken themes — the ways in which one life affects others, even if that life was lived on the margins (and some of the “witnesses” only meet her for a few minutes).

The most moving aspect of the film is that Varda and Bonnaire collaborated to make Mona a sympathetic character who has countless flaws — among them that she can’t be trusted not to steal or disappear and that she is, as one character puts it, “wild and unwashed.” Varda’s own description of the character is that she is “not engaging” but is still very “touching.” [ibid, pp. 142-43]

The film also picks up on the tone of Cleo and Bonheur by exploring the sad and lonely aspects of Mona’s personality. Her fate is predicted by a hippie farmer she meets who reflects on his old friends that stayed on the road, noting that “the loneliness ate them up in the end.” 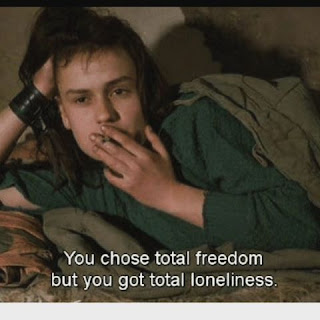 The script is definitely Varda’s best, as it slowly weaves the “witness" characters together. Thus, what could be a resolutely corny device instead becomes a poignant statement on the fact that the world can be quite small, even if you’re a drifter. And even though they are all, by necessity, supporting characters, we get three-dimensional portraits of the people who comment on Mona’s life. One of the most striking is a middle-class tree expert, played by Macha Meril (Godard’s A Married Woman). Varda commented on the character in a 1986 interview by Barbara Quart:

“… later on she has a guilty feeling that she should, she could, have done more. To tell the truth, I don’t know what more she could have done. I don’t think she was ready to adopt that vagrant — who, by the way, would not have been pleased to be adopted. So sometimes a film pushes toward the wall where we have to face the limits of our vague understanding, vague generosity, and vague not understanding what it’s all about. So I ended up structuring the film into the shape of an impossible portrait.” [ibid, p. 136]

Varda made a few more fiction features, but Vagabond is the last truly great one. One of the factors that make it a timeless piece is Varda’s return to her neo-realist roots, with non-professional actors being used for small parts. The use of such real faces makes the documentary aspect click and attaches us emotionally to Mona, as the dirtied-up Bonnaire fits perfectly among the rustics and fellow drifters she plays against.
*****

Varda made entertaining documentaries and essay films for the last quarter century of her life. The one that stands head and shoulders above the rest is The Gleaners and I (2000), which has an intimate visual style, a cast of colorful “characters,” curious tangents, and a timeless theme. The advent of lightweight video cameras made it easier for Agnès to hit the road and pursue her theme by looking for people who live a lifestyle outside of society.

That lifestyle involves living off of the food cast off by others, be they bourgeois in cities who waste large amounts of food (and obey stringent expiration dates calculated to get the customer to buy more products) or the rural landowners whose harvests leave behind lots of uneaten produce.

The theme is broad enough that she is able to discuss the urban homeless problem in Gleaners while also tackling the notion of those who live in trailers in the countryside and — her favorite latter-day obsession, peculiar souls with unusual hobbies and artistic outlets. 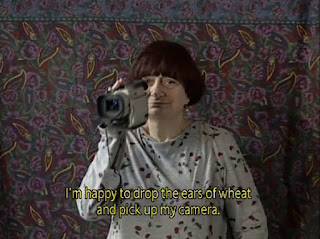 As a result, she follows several unforgettably eccentric characters whom another filmmaker would’ve depicted as “desperate” or “people to be pitied.” Varda instead exults in their strangeness and never criticizes them (even those who are clearly on self-destructive paths).

Gleaners struck a chord with viewers in many countries and became the signature film of the last two decades of her life. It also spawned a new fan base for her, who sent her letters and presents and whom she acknowledged in the film’s sequel, The Gleaners and I: Two Years Later (2002).

This sequel, which was included with the original feature on DVD in many countries, led the way to Varda’s final “memoir” documentaries, in which she presented us with an autobiography of sorts while also promoting the work of artists she liked.


Like her trilogy of films about Demy — Jacquot de Nantes, The Young Girls Turn 25, and The World of Jacques Demy — the memoir films are charming but have much less emotional resonance than the films examined above. They all are pleasant viewing experiences but will unfortunately suffer if one plans to “binge” her work and starts with the sublime fiction films, which are indisputably her finest work.

Of course, this is all relative to other filmmakers’ final films, which cast an emotional look backward to youth or middle age, or ponder the mysteries of life with metaphors for the Big Sleep (Fellini’s ladder to the skies is one of the finer ones). Varda’s video memoirs concentrate on beaches and the open road — which is as good a place to end as any.
*****

Two final videos. Both lack English subtitles, but the second is fully comprehensible. The first finds Agnès with a fan — Isabelle Huppert — being interviewed on the radio.

And a wonderfully assembled seven-minute montage of Varda’s themes, visuals, and performers:

Thanks to Paul Gallagher, cinéaste supérieur.
Posted by Media Funhouse at 9:24 AM No comments: