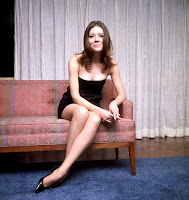 It’s hard to write about Diana Rigg — Dame Diana Rigg, that is — without gushing. She was that rarest kind of individual — one who is equally loved and obsessed over by male and female fans, a cult figure who was both a sex symbol (of a very new, Sixties kind) and a fine actress.

Her work in movies and TV and on the stage spanned nearly six decades, but it is commonly agreed (except among “Game of Thrones” fans) that her roles from the mid-Sixties to the mid-Seventies made that decade the most exhilarating part of her long, storied career.

Rigg studied at the Royal Academy of Dramatic Art and had a five-year stint in the Royal Shakespeare Company. When it came to the mainstream, however, she did get cast in rather silly little items in the early Sixties.

A teleplay featuring the young Diana is available on YouTube. “The Hothouse” (which appeared as part of “Armchair Theater” in 1964) is a coy comedy about the owner of a supermarket chain whose wife (Rigg) is becoming restless. It’s a very standard sitcom set-up and of interest mostly because of Rigg’s outsized personality:

“The Avengers” continues to have a strong cult following because it was so wonderfully assembled (and yes, it’s rather sad that younger folk and dim-witted oldsters hear “Avengers” and only think Marvel movie pap). The casting was, of course, sublime (both the leads and the guest villains). And the scripting was a great balance of tales of mystery and espionage, which also functioned as spoofs of these types of stories.

Nowhere is this better seen than in the fan-favorite episode “The Winged Avenger,” which is a comic book reader’s delight (with no trace of fx and not a single explosion in sight).

Curiously, all the items discussed here can be found in their entirety on YouTube, except for the other massive fan-fave episode, “A Touch of Brimstone.” This was the episode in which the kinky side of the show’s producers (and the British national character) was openly displayed. 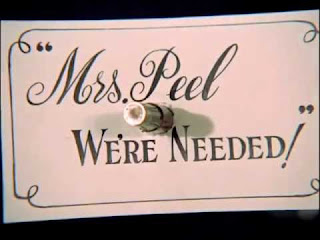 The episode is solidly entertaining as an “Avengers” intrigue saga, but it truly has become a sort of touchstone for men (and certainly women as well) who like dominant women.

Unlike the other major artifact of this mindset — Russ Meyer’s Faster, Pussycat! Kill! Kill! (1965) — “Brimstone” was produced to have commercials punctuate its kinky thrills. And so, for whatever reason (too adult? Copyright troubles with this ep but not “The Winged Avenger”?), it is not on available on YT, but “fan appreciation” videos devoted to it are up in profusion...

As could be expected, “Avengers” rarities that could previously only be found on bootleg VHS/DVDs from overseas are now readily available. Here is some Pathe News footage of the filming of the finales to the color “Avengers” episodes with Rigg (the bits where Steed and Peel would luxuriate in having defeated the villain, as they drove in an old-fashioned car):

And this oddity, an interview done for German TV that is quite clunky in its interludes for translation. Here we see the charming rapport that Rigg and Macnee had in real life. As I noted in my Deceased Artiste tribute for Macnee, he was much beloved by the women he worked with on the series. Rigg tried to keep a distance from the “Avengers” fan fervor but, when requested, she would indeed show up at events to pay tribute to Macnee:

Although she is the best remembered female Avenger, Rigg did only two seasons of the series. She fought for equal pay (and got it) on the second season, but felt that she had the leave the show or else be typecast.

In one of those lovely show-business turnarounds that are (as always) dictated by financial remuneration (as the phrase was laid upon Sean Connery, “Never Say Never Again”), two of her three movies following her exit from “The Avengers” found her playing similar roles — as an adventuresome journalist in The Assassination Bureau (1969) and as James Bond’s first-ever movie wife in On Her Majesty’s Secret Service (also ’69). In the latter she was the first kick-ass female match for Bond until Michelle Yeoh costarred in Tomorrow Never Dies in 1997.

But this should not be a tribute simply to Rigg the Entertainer (and sex symbol) rather than a recognition of Rigg the Artist. While she didn’t immediately run back to theater after leaving “The Avengers” and did play spies again, her first film after doffing her “Emma Peelers” (yes, that was the name for her jumpsuit duds on the show) was Peter Hall’s A Midsummer Night’s Dream (1968).

Hall, who did his best work in the theater (his resume is a frighteningly comprehensive list of the best modern theater and most of the classical repertoire), had already done a version of the show as a teleplay in 1959. The cast is a dream in that instance: Laughton, Finney, Vanessa Redgrave, Roy Dotrice, Zoe Caldwell. But two of the younger cast members who were nobodies (except, possibly, for those keeping their eyes on the RSC ensemble) are in both that ‘59 TV version and the ’68 feature film: the recently departed Ian Holm (Deceased Artiste tribute here) and Diana Rigg. (Ian was 28 in ’59; Diana was 21.)

But that version is not available online. What we can see is the 1968 feature, which is decidedly “mod” in its approach, since Hall — who also directed most of these actors onstage and did give the sublime film of Pinter’s The Homecoming (1973) — decided to have the actors play their monologues (and even stray bits of dialogue) straight to the camera. There he seems to be influenced by Godard; in various playful bits of the play’s comic scenes, it seems like he’s also very aware of Richard Lester. (Who wasn’t, at that time?)

The cast, as with the first production, is sublime, but the crop of performers in the starring parts were relative “youngsters” in general and, almost to a person, went on to have long careers in acting. Rigg, Holm, David Warner (who had already starred in some features), Helen Mirren, Michael Jayston, and Judi Dench (wearing barely anything except green body paint as Titania). Rigg is Helena and delivers her lines with a playful matter-of-factness (since all the characters except the “spirits” are certainly dimwitted pawns).

It’s a fairly good length for an adaptation of the play (just a hair under two hours) and does keep to a laudably ridiculous-but-not-frantic pace throughout.

The most puzzling rarities of all, which found Rigg again playing a super-spy, are a pair of dialogue-less short films that Rigg made in 1969. Made by a German production company in Spain and Germany, they were only available on 8mm (!) for home projectors and were, until the advent of the Net, left out of Rigg’s filmography.

There are several reviews of the shorts online, but only one forum board actually provides any background info on how and why they were made. A poster to an Avengers fan board (whose post was reposted on a classic horror board) noted that the two shorts were intended to be shown at gas stations while “people remained sitting in their cars at the filling station, waiting for their fuel, having their oil or tyre pressure checked etc. So the idea was to ‘entertain’ them by showing short (4-5 min) films — which explains why there is no dialogue.” 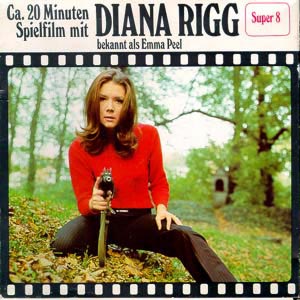 According to the poster, this info was imparted in a German TV special about cult series, in a segment devoted to “The Avengers.” Diana was reportedly paid 10,000 DM (“whether for all or one of these films remained unclear”), and the shoot took place in 4-5 days (but, then again, one short was shot in Germany and the other in Spain, so who the hell really knows?).

The poster noted that an actor in the film revealed this info on the TV special — the epilogue being that the company funding this odd enterprise went bankrupt, thus the odd appearance of the films on 8mm. There the films are promoted as “Krimi” (crime thrillers) featuring Rigg as Emma Peel. (The 8mm company apparently didn’t want to use the title “The Avengers” in their cover copy but were okay with saying that she was playing a copyrighted character.) 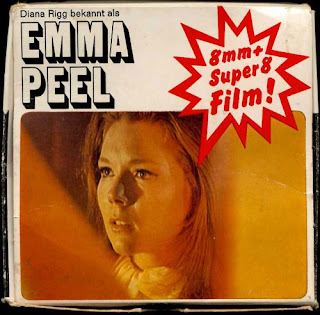 The first of the two, minikillers (1969), is four-part saga that pits Diana (wandering through a lovely, tourist-laden part of Spain) against a bunch of drug-smuggling crooks who have hidden drugs, explosives, and a blinding acid in baby dolls. The film is enjoyable but obviously lacks the urbane dialogue of “The Avengers.”

minikillers has the dual-strength, straightforward kinkiness that was borrowed from the TV series — wherein Diana is first overcome (usually tied up, like a heroine from the old cliffhangers) and then is able to overpower her captors and/or ambush the crooks in their hideout. 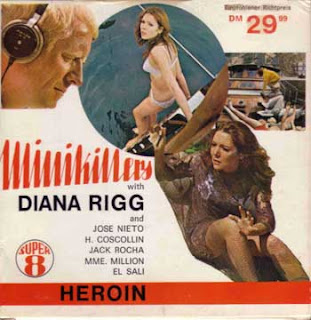 Rigg did her own stunts, in the manner of the color season of “The Avengers” that she was on — judo flips for the villains and punches, chops, and kicks to the camera to simulate actual violence. (The color season is singled out here because one can quite clearly see in the b&w season that she was doubled by a man in a wig.) Still, any film with Rigg as a spy is worth watching....

The second short, “Diadem,” is even less plotted. It plays like a series of spy-movie cliches with the appropriate musical punctuation (made to sound very much like Laurie Johnson’s music for “The Avengers”).

Her next film after that was Paddy Chayefsky’s The Hospital (1971), a VERY dark comedy that is both very much of its time and also a timeless story of chaos in a hospital (in which the valuable and very valid medical phrase “forgotten to death” was coined). Rigg represents vitality and sexuality to the ever-grizzled George C. Scott, who is fighting both administrative apathy and impotence. 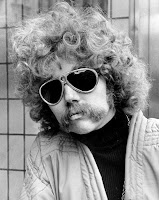 Rigg’s flair for deadpan dark comedy is on display in the delightful Theater of Blood (1973), one of those absolutely perfect Vincent Price horror vehicles. Vinnie is outraged actor “Edward Lionheart” who vows revenge on a group of critics, whom he then kills using Shakespearean  murder methods. Diana is his daughter “Edwina” who assumes various disguises (including curly hair and a mustache) to help her father kill those dastardly reviewers.

The film was mounted as a theater piece in 2005, starring the great Jim Broadbent in the Price role, and Rigg’s daughter Rachael Stirling (who is quite talented in her own right, and also looks and sounds incredibly like her mother) in her role.

We’ll end chronologically on a derivative downer, the 1973-’74 sitcom “Diana,” in which Rigg starred as a fashion coordinator for a department store. (From supermarkets in “The Hothouse” to a department store here…) The show was clearly modeled after “The Mary Tyler Moore Show,” and the sample episode found on YT is quite dull.

Interestingly, the scripter chose to reference Mary Tyler Moore directly in the dialogue — talking about her as Laura Petrie on “The Dick Van Dyke Show.” As was the case with the opening scene of On Her Majesty’s Secret Service (where Lazenby oddly references Connery), it’s never wise to bring up other people who’ve played a similar role….

Now, to jump the chronology for the closer: There are some gorgeous performances by Rigg on YouTube in classic and modern British fare, but it seems most fitting to close out with her performance in A Little Night Music (1977), in which she has one solo song.

At first the singing voice sounds dissimilar from her speaking voice, but online sources point to the fact that she (unlike star Liz Taylor) did her own singing. Her musical performance is not especially rousing, but her performance of the song is quite moving.
Posted by Media Funhouse at 2:14 AM No comments: