Catch It While You Can: 'The Uncle Floyd Show' online 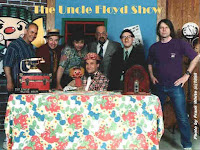 The notion that “everything is on the Internet” is a comfortable fallacy for those who want to cut ties with their “physical artifacts” (a phrase that simply means books, records, tapes, CDs, magazines, comics and more recent media like computer discs, CD-rs, and even backup drives).

Those who maintain “everything is on the Internet” are really saying that all *they* want or need is on the Net. For those of us who are nostalgia-buffs, there are several hundred key items we can think of that can’t be found anywhere on this “series of tubes.” One of those things is The Uncle Floyd Show.

A cult NJ-based TV show that began in 1974 and lasted for another 25 years in various iterations, The Uncle Floyd Show was an unmitigated joy. For those who are unfamiliar with the show, a very informal and personal history of it, written by late, lamented cast member Mugsy, can be found here. An informal and fun biography of the show’s host/creator/producer, Floyd Vivino, can be found here. These items came from Mugsy’s multi-page history of the The Uncle Floyd Show, which can only be found in an “archived format.” (as here)

The Floyd show was known and loved throughout the NJ and NY areas, but it has been “frozen in amber” as a cultural reference in “Slip Away,” David Bowie’s song from the 2002 album Heathen, which recounts the things he loved about NYC when he lived here in 1980 doing The Elephant Man on Broadway. He had been told about the Floyd show by another fan of old-fashioned comedy (and strong Goon Show acolyte), John Lennon.

When Bowie performed the song in concert, he would use a short snippet from the show that he licensed from “Captain Fork Productions” (a pseudonym for Mugsy). Here is a live version of the song, with Floyd video intact. This happens to be the last time Bowie ever played the NYC area, in Wantagh, Long Island. His backing choir was the Polyphonic Spree:

The other source for beautiful memories of the Floyd show is the site of photographer Bob Leafe. Bob has shot many rock superstars, but he also was the “house photographer” for the Floyd cast. His site is here and his pics of Floyd and company can be found here.

I have done my own part to try and “archive” the show, thanks to my great love for both the program and the performers. I interviewed the Uncle Floyd show cast backstage at the late, lamented Bottom Line nightclub in the Village. My interview can be found here:

The reason I’m writing this blog post at this particular time, however is that four — count ‘em! — four vintage episodes of the Floyd show have appeared on the treasure-trove that is the archive.org site. The shows are downloadable at the moment I write this, and I’d suggest that anyone interested in seeing them d/l them right away, since primo Floyd Show footage disappears off the Net quite quickly.

The first two are gems indeed. The fact that they are somewhat blurry and clearly from an old VHS tape only adds to the “vintage” look. For those who don’t know what that means, Floyd’s show was primarily on UHF stations over the years, so those of us watching in the NYC area saw his program through a haze of “ghosts” and picture noise. (But we still enjoyed the damned thing — just as crappy AM reception still made for great listening experiences….)

The first show is from January 28, 1980. It starts off with the “Mr. Tony” puppet — Floyd and his cast did lots of what used to be called “ethnic humor,” but he was first and foremost an expert at making fun of his own, Italian-Americans. After that, we have the Happy Birthday and “pictures on the wall” segments. The show began in ’74 as a kiddie show and these segments were the main remnants of that incarnation. (Its central inspiration was the Soupy Sales show, which was a kiddie show, but so much more….)

Floyd does his “Eddie Slobbo” character who taught the kids at home how to eat like a slob. (See, this was an educational show.) This is followed by a guest appearance by Jan and Dean, post-comeback (and Jan’s bad auto accident). The pair lipsynch to a foreign-language version of one of their hits, which is quite bizarre.

The vintage ads that punctuate the show include “The Bombay Badminton Club,” upcoming concerts at the Capitol Theater, and “Ken’s Magic Shop.”

The second show on the archive.org site is from the following day, January 29, 1980. This was a special occasion, the sixth anniversary of the show. Thus, after Floyd’s intro with his much-loved puppet Oogie, we see a vintage bit from the first years of the show, “The Breakfast Club,” with cast member Scott Gordon. Floyd notes that the tapes of the first shows were no longer playable, so he shows photos of the first iteration of the show in 1974, when it was indeed a kiddie show, with an audience of moppets in-studio.

Also included in this episode are three great bits: the puppet “Mr. Bones” dances to a Bill Bojangles Robinson song; Artie Delmar does a character called “Captain Amazing”; and, in a wonderfully esoteric turn, Mugsy does a Tom Waits impression, as the gravel-voiced singer “Tom Waste.”

Mugsy specialized in musical parodies, but the acts he spoofed were mostly mainstream superstars: Bruce Springsteen, Neil Young, Willie Nelson, et al. To see him doing Waits back in ’80 is further proof that the Floyd show was indeed on some other wavelength (and yes, John Lennon was still with us at that point, so he could’ve been home watching with Sean).

The third show, from Halloween 1983, leaps ahead to the point where Floyd and friends were on the New Jersey Network, a truly minor-league, viewer-sponsored PBS station that raised money from fans of Floyd and Dark Shadows, and then abruptly dropped both programs.

This show, which was the first episode to air on the NJN, seems like a vast leap forward for two reasons: our friend recording on VHS had a clear signal and the show was done on a professional-looking set that was built for the short-lived national, syndicated run of the program.

This episode features Floyd as “Mr. Grouch,” an angry old man who hates everyone. Scott Gordon plays “Dr. Whatsamatta” and Mugsy does his Neil Young parody, “Neil Yuck.” A band called the “Y-Os” also perform a song — Floyd had major stars on the show over the years, from the Ramones and David Johansen on the UHF shows to Squeeze, David Edmunds, and two members of Monty Python on the syndicated series. However, a lot of the bands seen on the program were indeed local NJ talent that were never heard from again….

The last show is also from the New Jersey Network, this time from 1986. The usual opening and closing features (Floyd on piano, Floyd and Oogie) are present, but the main guest is an animator who created a cartoon “music video” for Floyd’s song “Deep in the Heart of Jersey.” A guitarist-singer named Clarence Johnson also performs.

The show ends with Floyd playing piano and singing, while the wondrous Hugo, Man of a Thousand Faces doll dances along. It’s nice to end on that particular note, because the gent who made Hugo dance was none other than Mugsy, who worked behind the scenes to help make the show as much fun as it was.


Thanks to Anthony “Kingfish” Vitamia for finding this trove.
Posted by Media Funhouse at 3:22 PM

Indeed enjoy these while you can as it's Uncle Floyd himself who seems to be the one who pulls the shows off the Internet. At this point in time I have no idea why he bothers as there is little money to be made from the programs or perhaps there is another reason. Truly a great show.

DAMN, DAMN, DAMN!! You had 3 Uncle Floyd shows from Archive.org and I missed them. I've been searching for years for episodes. I watched your interview with them at the Bottom Line and like you I first caught on to them about 1977 or 78 and watched every day until the early 80's. I've been collecting bootlegs since 1975 and have quite an extensive music archive, so I never thought tracking down Floyd shows would be so hard. It's heartbreaking that I missed the few that were on Archive.org. Wish you could help me out. Maybe it's time I renewed my Usenet account and search out there. But I really would appreciate some help. Thanks.