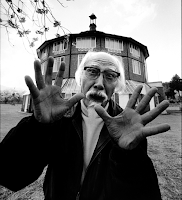 A master of subversion, Seijun Suzuki took the relatively low budgets he was given to make B-features by the Nikkatsu studio and created scores of the most memorably surreal, Freudian, and explosive films ever. Like many cult icons, Suzuki was underappreciated while he was working regularly, but he thankfully lived to see his work hailed around the world as groundbreaking and completely unique. (Although, being an infinitely frank soul, he did declare it “too late.”)

Many of his obits felt that contextualizing him was in order, so the magic name “Tarantino” was invoked. Tarantino’s work is closer to that of the more procedural, less dazzling, and far more violent Japanese genre filmmaker Kenji Fukasaku than Suzuki. The obits also cited Wong Kar-Wai and Jim Jarmusch. The latter is a diehard fan and paid tribute to Suzuki’s work rather brilliantly in Ghost Dog. The former might love Suzuki’s work, but John Woo is closer to the mark — particularly in The Killer, where he seemed to be fusing Suzuki’s Branded to Kill (1967) with Sirk’s Magnificent Obsession, which is quite a combination of influences.

It was also interesting to note that the official announcement of his death was made by a Nikkatsu representative, given that he had an acrimonious split with the studio, whose head at the time said his films “made no sense” and weren’t making any money. Whether or not they did well at the box office, it’s been noted that young Japanese college students loved them and were in fact the first cultists for his work.

The most-circulated interview with Suzuki is this one, conducted in 1997:


Suzuki's frenzied stylization of his storylines made him “a Japanese Sam Fuller” (although, of course, Fuller was as much a screenwriter as he was a director). By the time that he was able to do what he wanted with these assignments — mostly because the Nikkatsu chiefs initially ignored their B-feature production, so the directors could do what they wanted — he was using every method possible to make his films jump off the screen into the lap (and mind) of the viewer.


A recent festival held at the Walter Reade theater in Lincoln Center included a few of his earlier genre pics that have been unseeable in the U.S. (some of them signed by “Seitaro Suzuki,” his real name). The revelations were that they were *heavily* plotted for B-features, and that, even though Suzuki and his crew were breaking the fourth wall by drawing attention to the film’s style, he did stick rather closely to the formulaic plots he was given. If one sees his pictures in chronological order, it’s obvious that he was desperate to break free of the constraints of B-moviemaking.

Here is the trailer for one of the earlier efforts, Everything Goes Wrong (1960):

Thus, he began to “explode” his heavily-plotted genre pics with framing, editing, eye-jarring sets, and surreal touches like an overlay of animation. In interviews, he stressed that he was intent on making “entertainment,” not art, and that he wanted to please the audience. His array of techniques, though, suggested that he was well-aware of the European masterworks made in the Fifties and Sixties, as well as the modernist work of contemporaries like Oshima and, without question, the pop art that overwhelmed the era.

Kabuki has been cited as another influence, and while it no doubt was, one gets the sense watching his work that Suzuki was an incredibly “cinematic” artist, rather than one toying with theatrical techniques.

And he had some of the best titles in the business. The second half of this title is one of my all-time favorites for a crime film — or a film in any genre. Herewith the opening of Detective Bureau 23: Go to Hell, Bastards! (1963):


One of the names who is rarely linked to Suzuki is another kindred spirit, namely Robert Aldrich. In Kiss Me Deadly, Aldrich approximated the unapologetic violence of Mickey Spillane's Mike Hammer novels. Being a master-manipulator — and an artist who loved to play with and rework the genres he took on, much like his near-namesake Robert Altman — he left the graphically violent moments in the narrative *between* the shots. “Beat” Takeshi Kitano did this beautifully in his Hana-bi (aka Fireworks) (1997), and Beat has also cited Suzuki as a cinematic hero. This is another dominant characteristic of Suzuki's work: going “over the edge” in terms of subject matter and behavior, and yet not showing anything truly objectionable onscreen.


His trippiest yakuza drama was undoubtedly Tokyo Drifter (seen here in its entirety with no English subs), which was one of the two films that became cult items in the West during the Nineties.


I would also liken him to Nicholas Ray, in that both men were masters of widescreen and “color-coding” their characters. Akira Kurosawa was most certainly one of the greatest widescreen filmmakers ever, but Suzuki is closer to Nicholas Ray in terms of the feverish pace of his films and the fact that he unabashedly used color to tell his story, as he did in the unusually-kinky-for-its-time, brothel-set drama Gate of Flesh (1964) (seen below in its entirety, but with no English subs).


One of the other things that is truly mind-roasting and extremely important about Suzuki's work is the way in which, as he progressed through the Sixties, he began to toss off sequences that other directors would've made longer set-pieces out of. This is most blatant in Branded to Kill, where he quickly disposes of two impressive “trick-shot” murders (one of which is duplicated in Jarmusch's Ghost Dog, thus the thanks to SS at the film's end) and a brilliantly insane twist — our hero getting away from a tightly secure building by leaping out the window and riding a hot-air balloon to safety.


Other filmmakers would've spent 10-15 minutes easily on each of these moments, while Suzuki disposes of them in less time than it takes to listen to a Ramones song.


The most famous aspect of Branded is that it got Suzuki fired from Nikkatsu. He sued the studio and then became the subject of a blacklist that found him unable to work as a director for a decade. The ironic element here is that he had taken on the film as a favor to the studio. It was begun by another director, but then became one of the “most Suzuki” of all of Suzuki's genre pics. When he was unable to work as a director he took on work as an actor on TV and in the movies. Here is an ad he appeared in for a toilet cleaner of some kind:

When he finally returned to filmmaking, he wound up making seven more films, the last two of which were released internationally, as they were made after his worldwide cult-reputation had grown. I will confess that, while I enjoy his “Tasho trilogy” of very “high art” films, I prefer him subverting a weird script, as he does in his “comeback” film, A Tale of Sorrow and Sadness (1977).

The film, to which I devoted an entire episode of the Funhouse, is a bizarre tale of the “making” of a female athlete — at first turned into a sexy golf pro by corporate execs, the lead is later stalked by a scary neighbor who wants to steal her lifestyle. It's an amazing film that definitely is an extension of the weirdness that he was crafting in the Sixties (it is in fact that only film he made after his comeback that practices the same kind of subversion).

Watching it I was put in mind of two films about the manufacturing of a woman star by men. The first was Dennis Potter's too-little-seen Blackeyes (1989) and the second was The Legend of Lylah Clare (1968) by none other than Robert Aldrich. Suzuki's film is definitely in the same vein, as we see the execs figuring out how to have their golf pro dress, which ends up in her wearing a bikini on the links at one point.

The first half of the film is decidedly about male manipulation of women, but the second half is a more tangled statement about celebrity and its horrors, embodied in the person of the fangirl neighbor who wants to “be” our golf pro heroine (who has also become the host of a daytime talk show). Sorrow and Sadness is a great Suzuki film that has been shuffled under the carpet for the most part — it was released in the U.S. on DVD but with scenes that were missing the proper subtitling. The film is not available for free streaming online, but I found a music video created with images from it:

Suzuki's “Tasho trilogy” was the first time that he was making art films “on purpose.” The first film in the trio, Zigeunerweisen (1980), is a beautiful-looking picture that has some unforgettable imagery. Suzuki seems to have seen the films of Alain Resnais (whose work is as influential as Godard's to some leading Asian filmmakers) and works on a Marienbad-like level of ambiguity with these films, set in an era when Japan had a fixation on Western culture and dress. When Suzuki was unable to secure theatrical distribution for the film he had it shown in an inflatable dome in Tokyo.

The second of the two “Tasho” films, Kagero-Za (1981), also contains some gorgeous imagery but is, admittedly, rather slow-going.

The “Tasho” films are indeed beautiful-looking, but they lack the humor and sheer perversity of Suzuki's earlier work. Before the third film in the trilogy was made, Suzuki directed the very strange and pretty much unfindable Capone Cries a Lot (1985), a too-long-for-its-own-good but still imaginatively designed drama. The humor and perversity returned for good in Pistol Opera (2001), his remake of Branded to Kill with women in the lead roles.

His last film is certainly a wonderful genre-bending act of subversion. The musical Princess Raccoon (2005) is an intentionally kitschy musical that blends Western musical genres and a fabricated Japanese fairy tale. It is not as involving on a narrative level as his Sixties work, but it proved that, even at the age of 82, he could still deliver downright weird and brilliantly imaginative sequences.

Suzuki’s legacy is assured — the man whose movies “made no sense and no money” outlasted his detractors and former employers.
Posted by Media Funhouse at 2:37 AM No comments: