Down to the Smallest Detail: Deceased Artiste Ian Holm

Although he received plenty of honors in his lifetime (the most notable being a knighthood), Ian Holm was not a household name. He had a “familiar face,” though, from the incredibly popular films he appeared in (Alien, The Hobbit). His appearance rarely changed significantly, but he was indeed a character person who moved from role to role, expertly incarnating a number of different “types.”

The very popular films he was in have been covered to death, so I’d like to focus on just four of his less-discussed performances. The first is in the stunning film of The Homecoming (1973) by Harold Pinter. The film was part of the “American Film Theater” project and features four of the six actors who had been in both the London and NYC productions of the play. (The film director, Peter Hall, directed both of those productions as well.) 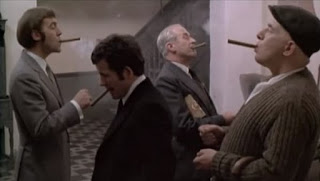 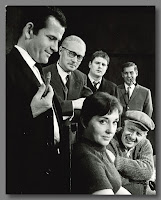 Here Holm is part of a top-notch ensemble but he still shines in all of his scenes, as the brother who will not back down (and seems to make his living as a pimp). The Homecoming is admittedly a filmed play, but the play is a very “tight” piece with many of Pinter’s trademarks, including characters who indulge in long bursts of dialogue that don’t seem connected to what the other characters are saying.

In one particular scene, he faces off against his brother’s wife (Vivien Merchant, then Mrs. Pinter; she tragically committed suicide), who has broken up the curiously all-male family unit of her husband. The clip below includes consecutive two-character scenes. In both, Holm appears to be the dominant character because he’s the one with the most dialogue, but he is the unstoppable force met by immovable objects — namely, his sister-in-law and his father (Paul Rogers).


The next exquisite moment is from much later in Holm’s career and comes from a more cinematic film. Atom Egoyan’s The Sweet Hereafter (1997) follows a lawyer (Holm) who wants to start a class-action suit against a town and a bus company, following an accident where a bus full of school children sank into ice.

Affecting a good “streetwise” American accent in the role, Holm delivers a monologue, which can be found below at 56:15. The monologue is beautifully written and directed, and expressively acted by Holm. It’s a tearjerking moment without being Spielbergian (read: mawkish and coy) and remains with viewers as much as the more seminal scene where the bus sinks into the ice.

In a just world Oscars would be given to turns like this one:

Now, onto the meat of the matter. Any time I can, I like to return to an ongoing discussion of the work of Dennis Potter. Potter deeply respected the medium of television (he worked for years as a TV critic for The New Statesman and then for The Sunday Times) and, in an era where elongated Netflix series are praised as being the “new literature” or “the new cinema,” his work should be hailed as the model for “auteurist TV.” 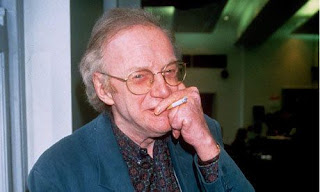 Meaning dramas and miniseries that tell a story in a confined period of time (his longest miniseries had only seven episodes) and are deeply personal works that could only have come from the imagination of a single artist, rather than the collaborative work that happens to have flourishes of great dialogue and is structured in a “goes down easy” mode and stays in production for season after season after….

It’s true that Potter hit his stride in the late Seventies with Pennies From Heaven, but his Sixties dramas are impeccable in their own low-key, low-budgeted way. One of the first great ones is a drama that served as a sort of “rough draft” for Pennies, an episode of the ITV Sunday Night Theatre titled “Moonlight on the Highway” (1969). 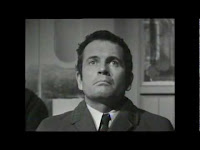 It’s an absolutely beautiful and quite anguished piece about David Peters (Holm), a nostalgia addict who is obsessed with the music of Al Bowlly, a British singing star who died during WWII when a German mine exploded outside his apartment. Potter shows us how David gets his depression medication through an NHS hospital and how his favorite form of escape from the real world (of which he doesn’t seem quite fond) is to listen to Bowlly’s records and lip-synch to them — setting up the lip-synching to dreamy Thirties tunes in Pennies.

The piece goes to those places that great modern artists go (think Cassavetes), and those who write for Netflix, HBO, and Amazon Prime do not — to scenes that are uncomfortable to watch for their sheer naked emotion. Here, we see the memory that haunts David (a man molesting him when he was a boy — reflecting a real incident in Potter’s life), a disturbing scene where a young female TV researcher working on a Bowlly documentary comes to his apartment and he makes a fool of himself over her, and the finale, where he attends a Bowlly fan gathering (made up mostly of senior citizens) and gets very drunk (and his doctor had warned him not to mix his depression meds and alcohol).

The result is a drama that is, indeed, like Cassavetes, not easy to watch. But the odd sense of liberation that comes at the show’s end is a beautiful release. David reveals a secret about his private life to the attendees of the Bowlly gathering that they are embarrassed by, but which frees him from his massive inferiority complex (and alienation from groovy Sixties culture). 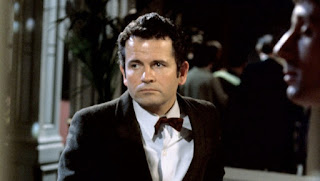 Holm plays it all to perfection — one often cringes watching David but, in the long run, one knows people like him (or, one has aspects of his odd personality in oneself). Potter’s writing was so intensely personal and emotional (yet, again, never Spielbergian) that one ends up liking David and not just pitying him, thank to Holm’s performance. In Potter’s late work, the heroes had more dominant fantasy lives to escape to, but David, with his lip-synching and the Bowlly fanzine he edits, is a prototype for the fan-nerd of today.


And Holm – like Bob Hoskins, Michael Gambon, Albert Finney, et al — was ideally suited to be a Potter protagonist/surrogate. Potter’s actors rarely returned to do additional plays or films, since there were so many good English actors “of a certain age.” One can see why a move from, say, Gambon to Finney, was never a downward trajectory (even the young, unknown Ewan McGregor, was fine in Potter’s Lipstick on Your Collar).

Holm shows up twice in Potter’s filmography, though, as he played the Reverend Charles Dodgson (aka Lewis Carroll) in the underrated Dreamchild (1985). An amorphous and admittedly odd creation, the film has three threads: the welcoming in America in the early Thirties of Alice Liddell (Coral Browne, in her last film role), Alice’s memories of her time as a girl with the Rev. Dodgson, and daydreams (and creepy nightmares) she has of living in Dodgson’s “Wonderland,” created to honor her.

The last-mentioned section features a weird and memorable use of the Muppets. (Making this one of the most “adult” films they appeared in — Henson was nothing if not open-minded.) Adding that elements makes the film a full-blown fantasy, but at the center of it all is Alice, trapped (in both good and bad ways) by Dodgson’s creation. The other key figure here is the sporadically seen Dodgson, wonderfully rendered by Holm.

Dodgson/Carroll is, of course, a “problematic” figure (that all-too-often-used phrase!). Holm beautifully conveys Potter’s take on him as a stuttering, introverted teacher/artist who truly does have a romantic love for a little girl but would never exhibit his love for her in any physical fashion. He is thoroughly embarrassed when the girl occasionally busses him on the cheek, and we suffer with him in a later scene where the maturing Alice joins with others in laughing at his stutter as he recites a passage from Wonderland during a picnic.

It’s a fascinating depiction to consider in this time period, when “cancel culture” is in existence and feminists decry the “male gaze” in art. Potter never shied away from the fact that he had a madonna/whore complex about women — he, in fact, showed how a male artist can “trap” a woman in his art in his controversial and much-decried miniseries Blackeyes (1989) (another underrated, discordant gem).

Here, we realize that the shy Dodgson could only show his love for Alice by putting her in his stories, thus both making her famous with his heartfelt gift (to both her and readers in subsequent eras) and also keeping her a girl forever, celebrated for being the little-girl muse for one of the finest-ever satires and a masterpiece of whimsy.

Dreamchild was, of course, made in ’85, and one wonders if any kind of positive depiction could be presented of Dodgson at this particular moment in history when simple depictions (and simple answers) are what is desired in art and entertainment. Holm’s nuanced and moving depiction of Dodgson thus reminds us that “problematic” artists not only produce the most intense, memorable work but also the most interesting discussions. And once discussions cease, art is dead.

In any case, the film may be an uneven creation at points, but its odd, amorphous tone makes it a challenging, thoughtful, and emotional piece — a triumph for Potter, Browne, and Holm.

Posted by Media Funhouse at 1:19 AM No comments: