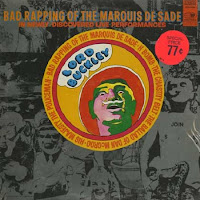 I am a junkie for several things, among them novelty songs and comedy albums. The novelty tunes I’ll go into another time, but as a comedy-LP fanatic, I need to heartily recommend this gent Jim and his Vintage Stand-up Comedy blog.

Over the years I’ve amassed a pretty decent collection of comedy on vinyl and CD, but the blogspot “sharity” phenomenon has now made it possible for older fans — the kind who aren’t frequenting BitTorrent — to delve into other’s “stashes” of rare vinyl. What could formerly only be obtained only through trades of audio tapes with fellow collectors, now is available on the Net, to anyone who has an RAR extractor (free download, for both PC and Mac) and the time to listen.

The thing about comedy records — true of any collectible item, really — is that they generally fall into two categories: the ones you will actively engage with over the years, replay and laugh at again in the future; and those you’re acquiring because they’re just so damned rare or so damned weird, or they are literally the only title by that particular person. The offerings on the Vintage Stand-up blog fall neatly into those slots, and since they do, I’ll offer two clumps of recommendations. The must-haves were generally available at one time on CD in some permutation or other (as with Woody Allen’s ever-changing two-LP set, or Nichols and May’s “best of”), but most comedy albums haven’t stayed in print for too long in any format.

Then you have the oddities and rarities that have been posted. They may only been for the stout-hearted, comprehensive collector, but among the group there are a few that I’ve been pleasantly surprised by (read: they were actually very funny). Many are worth having in some form just because they are so insanely rare, and if I haven’t noted it up to this point, the key here is that Jim (and Cheeze, presumably) are making these available through their “rips” from vinyl (you can hear the surface noise as the needle touches down, babies). There are also posts of things that are true rarities: the “Live at the Playboy Club” Moms Mabley album posted isn’t that commercially available CD, it’s a montage that was made for satellite radio that includes cuts from that album, plus various other rare Moms material. The same is true of the Brother Theodore comp that Cheeze put up, which includes a whole performance and several other things including the audio of a Letterman appearance. These bits of sharity are perhaps the nicest on the blog, since they don’t constitute any particular “score” at a record shop, but rather are the spoils of a collector’s longtime obsession.

Thus, I will spotlight some of the more obscure things put up on Vintage Stand-up Comedy. Including the one and only album by Paul Lynde. It includes a bit that has the word “rape” in it (not heard that often on an older comedy LP), plus that strangled, sarcastic laugh that became Paul’s truest comic legacy. 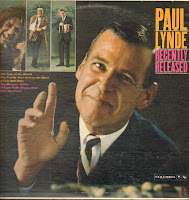 Since GSN dumped all its b&w programming into oblivion (and they’re getting such great late-night ratings as a result, haven’t you heard? Through the roof!), I’ve been jonesing for some Henry Morgan, and Jim has nicely obliged. This is a short LP (unavailable on CD, need I add) that is mostly focused on Morgan’s commercial parodies). 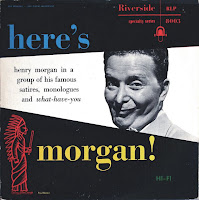 I have been a hardcore fan of Father Guido Sarducci, Don Novello’s alter ego, since I first saw him singing in the confessional on the 1970s “comeback” Smothers Brothers comedy show. Novello is wonderfully funny (check out his Laszlo Toth books if you’re anywhere near the humor section of a well-stocked bookstore), but there have only been two comedy LPs by him in the last 30 years. 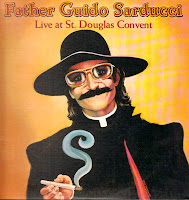 Godfrey Cambridge is a comic who has lived on more through the movies he did (Watermelon Man, Cotton Comes to Harlem) than through his stand-up. This is a recording (I’m not sure if it actually was a released LP or is just a tape that’s circulated) of Cambridge doing a great set in Las Vegas, that includes a mention of one of my all-time favorite films he participated in (one of the ultimate New Yorker movies, Sidney Lumet’s small and PERFECT Bye Bye Braverman), as well as some very funny material about gambling, traveling to Italy, and losing weight.

And since we’re on a fat kick, let’s mention “King Tut” himself, the terrific character actor Victor Buono. I’ve never quite gotten my mind around the fact that he was in his early 20s when he did …Baby Jane?, in his late 20 when he was on Batman, and was dead at 44. His one and only comedy LP contains a number of poems about being fat that he had recited on The Tonight Show. There are none of those appearances uploaded to YouTube, but you can find the best cut from this album, and a tribute video made by his nephew (the singer on the vid, who is not a Buono relative, sounds a whole lot like my perennial fave flower-child singer Melanie) 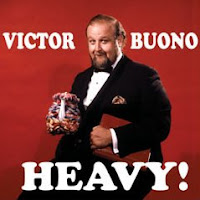 And, since I’m going to be fair and honest here, here is an absolutely awful album that I am so glad I heard. Will I ever listen to it again? That’s a good question, but I had heard about it, and being able to sample insult comic Fat Jack E. Leonard’s nasty 1957 “tribute” to rock ’n’ roll, which consists of him mostly barking out lyrics to half-baked r’n’r song parodies, was something I needed to do. It was my sort of very “happy pain.” For that I must, er, thank, Jim and Cheez. 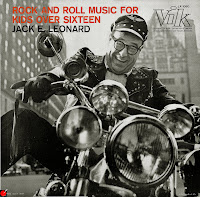 Fat Jack is here.
Posted by Media Funhouse at 12:18 PM

Thank You for the kind words.
The "Big Cheeze" contributor is none other that the man behind Dr. Forrest's Cheeze Factory (http://cheezefactory.blogspot.com).
JimG

I get the 'impression' that the best stand-up is forever behind us. Aside from Chris Rock, Lewis Black, and maybe a couple others, there aren't too many 'challenging' comics anymore. Lots of cute observational humor, but little in the way of bite.

Do you know what happened to this blog?

Unfortunately, JimG had a complaint from a CD label/website that didn't read the many, many disclaimers he had saying he would take down any problematic post; their complaint led to Blogspot taking down the blog in its entirety. He has an interim URL (http://www.vintagestandupcomedy.com/), but as of now the blog is very unfortunately down. Hopefully it will resurface in the future. His hard work and great collection of comedy LPs was much appreciated....

The vintage comedy blogspot appears to be gone.

I tried a blog here a couple of years ago sharing some old out of print 45s (and even 78s) and had stuff getting removed within weeks. Some people have cash-registers for hearts and under-developed funny-bones...

I had checked out a lot of cool stuff from the vintage stand-up blog just before my last hard drive popped it's clogs! Wah! So, if you're reading howsabout an invite?

Hey Jim G...if yr reading this, can I score an invite to yr new site?

RE: Vintage Standup Comedy -
Pretty sure an invitation can't be sent to an anonymous blogger. . .

This is why the internet leaves me bitter and frustrated.

"Fart Proudly A lecture on air pollution" a rare as hell comedy album complete with filthy songs. Was actually caled obscene in its day. http://sharebee.com/34dac144

I'd really like an invite to you new site as well... Loved the old site and spent many hours listining to all the cool old vintage comedy albums.

Not to beat a dead horse BUT...
to get an invitation to vintage stand-up comedy you need to leave your email address here or email me at jimgweb@gmail.com

Unfortunately the blog appears to be down now. I was hoping to be able to add a comedy blog to my blogroll/aggregator. If any of you know of any blogs that post comedy albums, please drop by the Digital Meltd0wn Music Blogroll/Aggregator @ http://music-bloggers.blogspot.com

I'd love an invite. I am a huge fan of vintage comedy. Thanks,

To JimG...Please send an invite to the Vintage Standup Comedy site to paulhzavora@hotmail.com THANKS!

Hey JimG, tried your email address, bounce o rama. If you are still around, and if your blog is still a rocking, I would love an invite. Thanks
superbunnyboy@gmail.com

Anyone having luck emailing JimG@gmail.com? Is there anyone else out there that can give an invite?

The correct address for an invitation is jimgweb@gmail.com
Jim

greetings from germany. u.

p.s. will there be cake?

I would really appreciate an invitation to your apparently amazing blog. Thank you so much in advance.