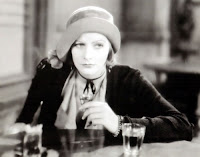 I think I’ve referred in the past to most of the YouTube posters who’ve uploaded entire movies as “he” because I tend to identify that level of obsessive fan behavior as male (you ladies tend to have more sensible proclivities). Well, two of the posters who’ve put up entire flicks on their accounts are indeed female, and so this week, in my ongoing survey of what’s what on that crazy, insane, bottomless source of entertainment, I salute them. (And yes, I know, the Internet being the intangible concept it is, the people claiming to be men could women, and vice versa.)

The first poster is someone known as The Thin Woman. This poster, like so many folks on YT, pays homage to her fave performers by making little music-vids of their best moments, as with this valentine to the great Myrna Loy:

She generally uses danceable trax as a background music, and in some cases the lyric/title adds another layer to the imagery, as here Garbage’s “Androgyny” is used to salute Garbo:

Her most interesting is a montage of actresses who were rumored to be lesbians scored, natch, to Katy Perry’s “I Kissed a Girl”:

The Thin Woman’s complete uploads include these movies: The Blue Angel, The Bachelor and The Bobbysoxer, All About Eve, Suddenly Last Summer, Cat on a Hot Tin Roof, and Garbo’s first talkie, Anna Christie:

The other female poster must be named Sara, because her nick is SaraismyName. Sara is a young woman in Sweden who also likes old movies and Golden Age actresses. Her rarest upload is a full 1972 TV interview with Ingrid Bergman (without subs), which can be found here.

She also does montages of her faves, set to current music. This is a compilation of moments featuring the ever-awesome Carole Lombard set to a song by “ladies man” Chris Brown (he treats ’em so nice):

Sara’s complete uploads include Madame Curie, The Letter, That Forsyte Woman, Blossoms in the Dust, The Old Maid, Charade, The Miniver Story, The Golden Arrow, and The Great Lie. Here’s my fave of the bunch, the perfect screwball comedy, Bringing Up Baby:

Sara is also a fan of classic TV game shows from the U.S. I’m not sure where or when she saw ‘em, but people know my opinion of GSN here in the States since they dropped all their b&w programming. In any case, Sara has posted some montage videos of the ladies of What’s My Line?. I didn’t realize there was anyone under 30 years of age who even knew who these women were, so I was surprised to see that she had posted this episode of a 1950s show hosted by Arlene. And was very amazed to see this collection of “Lady Arlene” moments (I do miss John Charles Daly!) set to the Beatles:

And this further Arlene/Beatles clip:

This one was the biggest eye-opener, a montage of Dorothy Kilgallen moments, set to Blondie’s “One Way or Another”:

Give both posters a whiskey, with ginger ale on the side, and don't be stingy, baby. (Understand who will.)
Posted by Media Funhouse at 12:21 PM