The magical little man: Nelson de la Rosa and his tribute to Michael 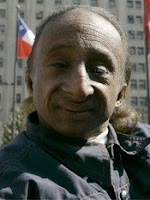 I was hoping to lay hands on the original VHS that has “el hombre mas pequeno del mundo” doing his FULL “Thriller” dance, but since it’s stored away somewhere in the cavernous confines of the Funhouse, I will merely throw your attention to this compilation I uploaded to YT back in 2006 (the “Thriller” portion is at 2:16). I’ve uploaded a bunch of clips that have attracted a few thousand viewers. A handful of clips have gotten tens of thousands of viewers (so far Jane Birkin has actually beaten people who made sexploitation films in popularity — which pleases me). BUT Nelson is the hands down winner, as this vid has gotten close to 298,000 viewers, plus about 30,000 who saw it on when it was up under a different account name that encountered three specious "violations" from YT. Every week more folks checking the clip out, and discovering the true magic of Senor de la Rosa for themselves!

Posted by Media Funhouse at 2:17 PM

I can feel the magic radiating from my computer screen!