Big man on a big couch: Marlon Brando talks about children killed with machetes… for Michael

It’s an amazing bit of footage we’ve heretofore been denied. It was not included in the PPV versions of the September 7, 2001 “30th Anniversary” concert that Michael Jackson threw on his own behalf (there were two such shows, marvelously detailed here).

The moment I had most wanted to see, the one non-musical segment that was the most talked-about, was Marlon Brando sitting on a couch talking about impoverished children. The editors editing down the September 7th show (that concert ran a languid five hours, and a second one took place at MSG on September 10th, 2001, a day before 9/11) left this segment out, but now a private vidcam recording of the event, as seen from a large screen in the arena, has surfaced.

Wearing shades and ensconced on a couch onstage at Madison Square Garden, Marlon didn’t speak for a minute. He stares at his watch at points and then tells the audience that in the minute they just waited, “there were hundreds, if not thousands, of children around the world who got hacked to death with a machete. Their parents died of typhus… or some other disease.”

He goes on to talk about how horrible this situation is, and the audience plainly doesn’t care at all, and won’t pretend that they do. The one great thing is about seeing this “remotely” shot video is that we hear the dimwits and disphits in the audience mocking, laughing, and derisively clapping. Only a mention of Michael’s name by Brando, and the screen’s cutting to the wax dummy that he had turned into by that point, makes the audience finally stop their jeering. Like any good heel wrestler, Brando senses their hostility at his message of peace and charity, and adds, “I could go on for an hour and a half…” to make them boo and jeer even harder. 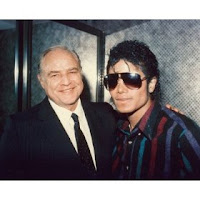 Of course, Marlon’s appearance on the show was pretty bizarre in its conception. But then again, Marlon was the Lord High Master of Bizarre by that point (most likely the reason he really enjoyed hanging around MJ). What the event reminds me of is the booing of Sinead O’Connor at the MSG tribute to Dylan — a houseful of people there to honor and worship an old protest singer, and a big bunch of them booing a new protest singer (and, of course, anyone who has anything bad to say about Catholicism has my admiration, in spades). In this case, Michael Jackson was indeed a philanthropist and charity-minded soul, and when his worshipful audience was asked to think about what he had donated to for eight minutes, they eagerly booed and jeered. Their hearts were large.

Posted by Media Funhouse at 1:57 AM