“Bloomberg beach” and fare hikes to line the pockets of the MTA: report from NYC 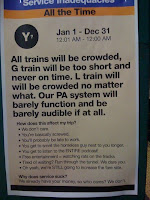 I have many more entertaining things to offer up in the next few entries, but I wouldn’t’ve been true to my MTA- and mayor-loathing self if I didn’t do an entry about the latest, utterly abhorrent developments in this burg.

First of all, in the past, whenever the MTA raised the fare, what would happen is that the trains and busses would gradually slow down to a crawl, then the MTA would say they were drastically in need of money (ALWAYS A LIE, they are always in the black and their leaders are always raking in the dough). Then when the fare was raised, things would go back to the normal level of incompetence and intermittent service.

This time around, however, there’s a new wrinkle. The subways and busses haven’t run normally for months — lines have been shut down; service is barely there at night and on weekends; and there are few if any workers in the token booths. So the service isn’t there, entire bus lines have been taken off of the schedule, and thus the MTA says it’s desperately in need of a fare hike (money comes from the state, money comes from their two sets of books, but the answer, always, is a fare hike so the riders will become accustomed to the fact that the price will be rising steadily). This time, however, we, the cashless folks who don’t have any extra dough to contribute to line the pockets of the MTA heads and their overpaid workers (yeah, they're *all* guilty of greed, folks), have been informed that services will continue to be cut anyway, even after the hike. No honeymoon period of reconciliation is necessary when the organization, for all intents and purposes, holds the city hostage.

And have we heard a peep from Billionaire Mayor Mike? Of course we haven’t. He’s gone on the record as saying the subways are functioning perfectly — why, in fact, he even takes the subway to work every morning in a grand show of duplicitous “I’m with you/don’t come near me” good nature. The fact that he’s “going green” in this fashion by being driven to the subway in an SUV, and going to a stop that isn’t the one closest to where he lives, is no matter. He’s pretending he’s one of us, and the MTA makes certain that particular train runs on time every morning (a friend who lives in the Bronx notes that that arrival is always on time, but the ones before and after it are as random as any other subway taken during the day).

So, Bloomie is a sham. He’s an affable billionaire who has our best interests at heart — so his ubiquitous advertising reminds us. As I wrote about previously, Bloomberg plays the role of friendly despot, but really he has no one’s interests at heart except his own and that of his billionaire cronies. Oh, and the tourists. His latest “quality of life” innovation (a concept espoused by former full-out vendetta-king and severely petty despot Guiliani) is to close off certain central areas of traffic in NYC — you know, tiny places like Herald Square and Times Square — so that “New Yorkers can better enjoy their city” (likewise, a pointless and rather stupid plan to shut traffic down on Park Avenue — since ya know there’s oh-so-much to see on that Avenue of the Wealthy). What it does achieve is to allow tourists to take a break from their dispersal of cash, something near & dear (the dispersing, and most certainly the cash) to Bloomie’s heart. Since there are fucking free-standing beach chairs in the middle of one lane of traffic in Times Square now, reporters have taken to calling the horrifying area “Bloomberg Beach.”

Who cares if he’s further gutting the traffic patterns in the city? Mayor Mike didn’t get his “congestion pricing” plan, and so he and his boys came up with this ridiculous scheme to pay back the administrators who voted against it. Bloomie can paralyze parts of the city just as well as any old labor strike or fare hike can. In the meantime, the transformation of the town into a soulless tourist trap continue apace — the “old New York” can still occasionally be found, but as long as we continue the rapid slide into the dystopian rich/poor set-up, there will be fewer and fewer things that will remind natives of the town that once was. And Bloomberg? Well, he certainly is the future: a cold, soulless, monotone individual who is most certainly going to ascend to a third term, since he wants it and blackmailed those who were eager to vote against it. This was evidenced in his telling state senators the other day how he would exact his vengeance if they didn't get their act together (provide no money to their campaign funds — wink, wink, I’m really rich, you don’t want to make me mad).

And, of course, there was the recent lovely moment when a reporter asked him about the term limits thing again. Since he had announced that everything is going so well in NYC (all dependent on him and everything he does, mind you), the reporter thought to ask him why, if everything is all and well good, that he needs that third term. Mayor Mike feels that he should never be asked again why he is in need of three terms when every other mayor in the city’s history has only required two (except for Guiliani, who was going to ride the 9/11 rocket of depression and mismanagement into a third term, but was shot down — hey, Rudy couldn’t blackmail-with-cash the way Mike can…). Bloomberg’s final word for the reporter — knowing every camera in the place was on — was a disgusted, “You’re despicable!” The legendary NYC newsman Gabe Pressman (I’ve always been so surprised and pleased to see him still walkin’ around the streets of our town — now there’s some old NY for ya!) has written about it here, with appropriate video links.

Knowing the way the Democrats operate in this city, I'm sure they'll lose the election (as with Mark Green's refusal to accommodate his rival Fernando Fererer, which put Bloomie in the driver's seat in the first place). Thus Bloomberg will get his hotly-desired third term as King Monotone Rich Kid. I would love to see him defeated — perhaps he could take his "beaches" with him, and forget about that daily subway ride....
Posted by Media Funhouse at 5:19 PM