Better than her material: Isabelle Huppert in ‘Phaedra(s)’

Isabelle Huppert is a fearless performer, whose presence in a film or play is often the No. 1 incentive to see it, as she is constantly working to challenge herself and chooses to appear in the most difficult and varied projects imaginable. Few other stars make such a concerted effort to keep their work fresh and unpredictable.

Often, though, she is the best thing about a given work. Case in point was Phaedra(s), a “triptych” of three one-act plays that appeared at the BAM “Next Wave” festival from Sept. 13-18. The production was a pretentious mix of grandiose themes, shrill action, and bewildering tangents.

I've talked on the Funhouse TV show about the two reasons I think Huppert is the finest actress working in film today. The first is that she is an absolute master at depicting characters experiencing a breakdown — be it an emotional, psychological, or physical breakdown, there are few performers currently working anywhere in the world who can do this in as deft a way as Huppert.

The other aspect of her work that is so impressive is that she is willing to play unlikeable characters, and in fact seems to seek those kinds of multidimensional roles out — not villains, mind you, but women who are often abrasive or selfish or emotionally distant (as people frequently are in real life). American stars love to be loved — it's the clearest path to good reviews and Oscars, so they steer clear of the types of characters that Huppert pursues and then incarnates to perfection. (Jennifer Jason Leigh and Sean Penn had a heyday doing those kinds of parts, but both seem to have fallen into the wilderness.)

Her interest in conflicting emotions and emotional meltdowns clearly drew her to Phaedra(s), the brainchild of director Krzysztof Warlikowski. He and many of the cast and crew are Polish, although the play was developed and first staged in Paris, and later brought to London and NYC, where English subtitles were projected above the stage. Warlikowski decided to join together three one-acts that tackle the Phaedra/Hippolytus legend in very different ways.

The first piece, by the Lebanese-Canadian playwright Wajdi Mouawad, is the closest to the original myth, about a woman who falls in love with her stepson Hippolytus, is spurned by him, accuses him of having raped her and, after he is put to death by his father, kills herself. Huppert first played the goddess Aphrodite, then Phaedra, who in this incarnation does sleep with Hippolytus.

The piece was rendered in a hyper-minimalist fashion but, to put a modernist spin on the proceedings, Hippolytus is introduced to us speaking into a video camera (we see him from behind as he stands in a Lucite “room” that was rolled onto and off of the stage). The play is preceded by an Arabic rock tune performed beautifully, with a dancer doing a sexy “exotic” routine that seems included solely to indicate (like the video) that this is a multilayered work.

The second play, by British cult figure Sarah Kane (whose suicide at 28 looms large in her legend), is a modern-day variation on the tale, with Hippolytus (Andrzej Chyra) as a spoiled playboy, whose stepmom Phaedra gives him a blow job before she learns that he's been sleeping with his stepsister (her daughter). Warlikowski chose to have this play take place almost entirely in the Lucite room (“they're like caged animals, see? The modern world is like a multimedia prison cell, folks!”).

A TV set is on during this piece and it shows the Psycho shower scene in slow-motion on a loop, synchronized to the violence of Hippolytus' actions. Again, a message as subtle as a flying mallet, and a thoroughly distracting touch that would better serve a gallery installation than a play.

Between the second and third plays was an interlude in which the sexy dancer came out and performed her exotic shimmy in spangly bra and panties. At one point she narrowly avoided a wardrobe malfunction (for a production with so much sex in it, there was no nudity).

The “industrial” sounding music increased in speed and served as the only element that distinguished the dance routine from something you’d see in a nice hipster “modern burlesque” show. (“Sexy for the men *and* the ladies in the audience!”) What it had to do with the legend of Phaedra was… exactly nothing.

The third and last one-act was a thematically related piece by South African novelist J.M. Coetzee, in which famous author Elizabeth Costello (Huppert) is interviewed on a French TV talk show by a chatty host (Chyra) about the sexual relationships in ancient times between gods and humans. This was the “comedy” of the evening but it clumsily switched gears to find the author and the talk show host suddenly acting out dialogue from Racine’s Phaedra.

Despite the fact that there was a lighter tone to Coetzee’s play, one still got the impression of watching a spoof of avant-garde theater. Productions at BAM frequently give off that impression — it has, of course, been the NYC home for many Robert Wilson productions, each one of which seems to be a carbon copy of the one that preceded it, albeit using a different primary color palette.

The final distractions included in the production were clips from the two films shown during the Coetzee play. The first was from Frances, showing Frances Farmer (Jessica Lange) receiving electroshock therapy and the “state of the art” lobotomy that jumbled her mind for the rest of her life; the second was from Pasolini’s Teorema, showing a god in human form (Terence Stamp) coming on to a human (Silvana Mangano).

The fact that the clips were (again) heavily distracting from the piece we were watching was a given — but the presence of the Frances clip was indeed baffling (so much so I don’t remember how/why it was shoehorned into the proceedings).

Throughout the evening — have I forgotten to mention that the production ran close to three and a half hours? — it was apparent that Huppert’s performance was superb and the plays were interesting at best, overblown at worst. The one lengthy scene that didn’t involve Huppert — in the Kane play, which was started before the single intermission and concluded afterward — found Hippolytus (Chyra) and a priest (Alex Descas, familiar from the films of Claire Denis and Jim Jarmusch) discussing the suicide of Phaedra. Both actors did a fine job with the scene, but Huppert was sorely missed — her energy had been driving the proceedings, taking our attention away from the gimmicks and messages that infused the material.

For over three hours Huppert simmered, suffered, seduced, and exploded (on at least three occasions she screamed “Je l'aiiiiiiame!” – “I love him!”). Her portrait gallery of multidimensional characters was enhanced by a trio of bravura performances in what was otherwise an unpredictable but wildly overblown affair. 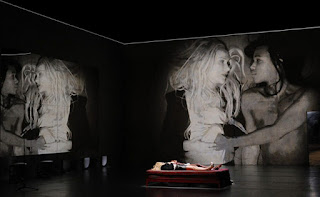 On Saturday Sept. 17, Huppert did a Q&A about the play at BAM (no recordings or photos allowed). She spoke with philosophy prof (and devout Bowie fan) Simon Critchley about her approach to acting and her answers were, unsurprisingly, direct and matter-of-fact.

“I don't have a theoretical approach,” she declared, adding that there is “no mission” involved in her performances. “The story matters very little for me,” she stressed — for her it is all about "bringing the vision of the director” to life. She referred to her work with theater directors and filmmakers as both a “secret conversation” and “an existential adventure” (she excused herself for the grandiose sound of this last phrase).

The audience Q&A portion of the event was, true to form, filled with audience members making lengthy statements about themselves before asking their questions. (This is a characteristic of so many Q&A sessions with artists and entertainers in NYC that it almost becomes a parody of itself.) The only one that was intriguing, albeit beside the point, was from a gent who claimed he had been unable to speak to Jean Seberg when he met her and was similarly silenced when he met Huppert years before.

His question (when it was finally broached) was about the role of Joan of Arc. Huppert noted that she worked with Seberg (on Le Grand Delire in 1975 when Isabelle was 22 and Seberg was making her next-to-last film, four years before her tragic death at 41) and got the chance to talk with her about having worked with Otto Preminger (Huppert made her English-language debut in Preminger's failed 1975 thriller Rosebud). She commented on her own experience playing Joan of Arc in an oratorio in which she was suspended 32 feet above the stage on a small platform.

She had no further remarks about Seberg, but stressed again that she, Isabelle, performed her roles to make the character “live” and to collaborate with certain directors. Her track record is certainly unblemished because, even if the film or theater production she's starring in is sub par, she is consistently superb.

Note: I was unable to identify the photographers who took the images above; if those photographers would like me to credit them (or to remove the image), please drop a line to ed at mediafunhouse dot com.
Posted by Media Funhouse at 1:55 AM