We thought it would never end. Wildly hailed as a year that was so shitty its effects were unheard of since the last world war, 2020 and its attendant virus has decimated all in its path. We will happily all say goodbye to it, still knowing that future nightmares lay in store (’cause that’s the way tragedies come, in clusters).

From the start of the spread it was noted that the countries that were handling the pandemic best were those who activated their authoritarian side (as with the country where it all began) and locked everyone down for good, legally demanding they all stay in their houses. But the *real* boon to people around the world were the “first world” governments that recognized how people going about their regular work would excite the spread even more, so they provided financial support to their citizenry. Not the U.S., not by a longshot.

So, the notion of “herding cats” in terms of getting Americans to follow rules was spoken about. Then there was the administration in place, run by a game show host who never wanted to be president, just hold rallies and campaign against whomever was the pres. He did a stunningly awful job with the pandemic — but, true to America’s two-parties/one-mind set-up, the solution for the Dem party was to put up as an “alternative” in the 2020 election their most right-wing candidate (save billionaire-for-hire Bloomberg), who was the counter to Trump in term of Tweeting and loudness but is uncommonly like him in terms of hard-line, helps-no-common-citizen policy (and of course is still — they are our only salvation, sayeth the pundits [unless they are socialist] — an Old White Man).

So, the next four years will be a continuation of the policies held by the last 40 years of presidents from both parties. In the meantime, the pandemic continues unabated, and there will most surely be other health crises, for which the government response will again be “Pick yerself up by your own bootstraps, suckers!” 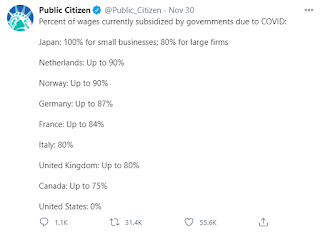 The year-end rallying of two of 100  senators — one Republican, one Independent (Bernie as a senator is an Independent; his alliance with the DNC has been his biggest mistake all along) — to get even a second, one-time-only $600 stimulus check to average people tells you all you need to know about America in a single sentence.

Insert among the future disorder occasional outbursts of civil unrest (because the cops can’t be hemmed in by things such as actual laws — they can do what they want, when they want), which will in turn create curfews in major cities. That part of 2020 was the most amazingly oppressive — a world in which governments would rather let riots take place (the big-box companies all have insurance...  and police riots are "legal") than listen to peaceful protesters. The solution for riots (and pandemics): Stay in your house.

And so far the effects of the pandemic have been reflected in both infection numbers and a death toll, plus a DEEP level of depression among people all around the world that, again, resembles events in the first half of the last century for any kind of comparison.The toll of things “missing” included missing people, missing experiences, missing pleasures, missing addictions, and the key to all, missing communication and in-person encounters with physical interaction, even if it is only looking the other person in the eyes. (The Zoom call is not a phone call; a phone call is not a meeting. Text messages and direct-messages in social media are similar to writing email or print letters, but they are merely “bites” of communication that preserve the distance while supposedly bridging the gap.)

Thus, we can only say farewell to this year with hope for the future — and the realization that more health emergencies, psychological disasters, financial collapses (personal and institutional), and failures of the U.S. government to help the populace in any important way are set to come. The only solution: let’s dance!

And since X were being lyrically polite in their heave-ho to this annus horribilis, let us jump over to the goodbye wishes offered by the very funny folks in Little Big, a Russian dance/pop/rock/demented music group. 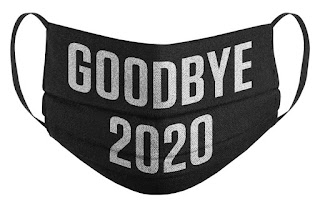 Posted by Media Funhouse at 2:53 PM No comments: