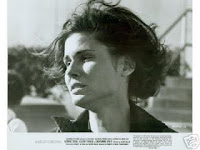 Sometimes an obit’s juiciest, strangest details are contained at the end. For instance, I was referred this week (by friend M. Faust) to the mini-bio/obit that is circulating around the Net for actress Ann Prentiss, who is best known for three things: being Paula Prentiss’s younger sister; being one of the female leads in Altman’s terrific California Split; and starring in the short-lived but well-remembered superhero sitcom Captain Nice.

She was born Ann Ragusa and had pretty regular TV work in the Sixties, plus bit parts in a few other films. What is most amazing about reading her bios and obits, though, is that she died on January 12th of this year in prison at the age of 69, serving a 19-year sentence for having solicited the murder of her father and her brother-in-law, Richard Benjamin. The conviction was also for “making terrorist threats, assault with a firearm, and battery.” I’m not sure which family member she battered, but this is quite a surprise, as Benjamin and Paula Prentiss have had one of Hollywood’s longer-lasting, quieter marriages over the past few decades. Ann was apparently not the shy, retiring type.

Ann P. is good in California Split (on the right), but she seemingly never quite clicked in Hollywood, perhaps because she looked and acted much like her older sister. I’ve liked Benjamin and Paula P. since my childhood viewings of He and She and Quark. His subsequent career as a director has been very spotty (some titles, after the entertaining My Favorite Year and Racing With the Moon: My Stepmother is an Alien, Mermaids, and Marci X); of course, no matter how really bad his movies have gotten, nobody deserves an armed assault on their ass.

This case certainly didn’t have the “sex appeal” of Lindsay Lohan serving a shortened sentence for a drunk-driving offense, but you’d think Ann’s arrest might’ve been given a little bit of tabloid press at some point. I guess the readers of the Enquirer and TMZ don’t remember The Stepford Wives or Goodbye, Columbus — never mind a critical hit/box-office flop like California Split….
Posted by Media Funhouse at 12:27 AM

i received a facebook invite for an improv performance he was in. i ignored it, and he called me a few days later to personally invite me. we talked for a bit, i told him i might be in dc that weekend (true), but that we should get a

I understand that Ann Prentiss has passed on, but is there a proper obit anywhere? I am curious if there is anything out there past the SSDI listing.

And, was she in prison when she passed? Still? I thought she had profound mental issues and might have been placed somewhere for that by now.

This whole thing is interesting to me, which makes me weird or something, I guess.

I think she should have been under a doctor's care for mental illness
She definitely did not deserve 19
years in prison. I feel sorry for her and her family.

I just looked her up on the net after seeing her in a TV western. I knew Ihad seen her before. Only to find a very sad story. Does anyone know what she died of?

Odd about Ann (or Anne) Prentiss, especially given that Paula had a nervous breakdown. Genetic Issues? Paula Prentiss was a favorite ofmine and I'd love to see her in something again.

How did the National Enquirer and Globe let this bombshell of a story get away?I guess The Benjamins are (small potatos)in the movie/Tv industry.Many fans as well as myself would like hear the whole story. Maybe Paula and Richard would sit down with Bill Shatner on his "RAW NERVE" program and give a detailed account of the events that sent Sister Anne to the slammer.

Truly a sad story. There had to be some severe mental health issues. I am sorry to hear she died in prison and in disgrace

Could it have been a form of mental illness that led Ann to this decision to terrorize her family and hire someone to kill her brother in law? Seems odd that this was not brought up in her trial, and why wasn't she sent to a prison known for helping, or housing the mentally ill?

"I’m not sure which family member she battered..."

I've lived in Ca 67 years, and I can assure you that no one goes to prison here after being denied appeals galore, and every liberal attorneys tricks to make us all forget the Victims of the criminal act. . . sincerely, rc f

Admittedly I have replaced people watching with online comment reading, I have posted a comment perhaps once or twice. While somewhat off topic and for reasons unknown to me, I take offense to RC F's reference to the phrase "every liberal attorney's tricks to make us all forget the victims of the criminal act". I don't pretend to know all the details, laws applicable and attorneys involved in the Ann Prentiss case. Judging from his comment he must. If not, perhaps he should not be so quick to paint such broad strokes. Regards, Sherpy

I only know of her in the movies mentioned and those I've seen and or have on dvd. I just want to add to her work as acting in a Bonanza episode with Strother Martin as her Dad. Strother as we all know was a great actor in his time. Ann Prentiss did very well in this episode of Bonanza and had fun creating havoc for Hop Sing in his kitchen.
Myself, I will only remember the Good things done that actors have worked on. Why dwell on what went wrong in their lives. I'm sure it was hard enough for them & their families to see or read about, back when they happened.
Here's to a late and great actress, Ann Elizabeth Prentiss!!!

Very sweet and positive view on Ann Prentiss and the work that lives on that she performed in during her career!