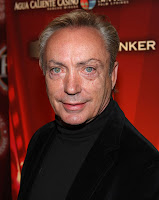 Continuing on the thread of character actors introduced below, let me now celebrate the unique presence (and that’s what it’s all about, kats and kitties, screen presence) that is Udo Kier. Udo can be, by turns, the scariest and the campiest actor in a film, and that definitely calls for some celebration. So I offer you a clip uploaded by friend Paul Gallagher, a condensation of the oh-so-Eighties-looking sci-fi kitsch-a-thon that is The Invincible, directed in 1985 as Der Unbesiegbare by Gusztáv Hámos. Udo plays a kind of mega-camp Ming the Merciless here, and the faux video stylization is a bit overwhelming, to say the least:

I had long ago linked to what I considered one of the strangest meetings of Nina Hagen and another individual (check it out!), but I can truly say that there may be no finer pair of German eccentrics than the equally intense Nina and Udo:

And an interlude of Udo dancing, for no known reason (does he need one?):

And what set me off on this Udo-journey? Friend John Walsh sent me this wonderful clip of Udo being interviewed at the London Film and Comic Con in 2008. It was conducted by the French network Tele 7, but Udo speaks English, has had at least one drink (we see it in his hands at the outset), and requests that the cameraman follow him into the men’s room. Udo is one of a kind!

And since my initial blog entry on Udo was on the Funhouse blog which preceded this one (and is sadly defunct), I have to end this entry with the links I had included there to Udo's music videos (yes, you read that right). Here, in his Eighties syntho-pop prime is Udo with “Musik a Go Go”:

And quite possibly one of the most entertainingly crazy music vids I’ve ever seen, Udo’s “Der Adler.” He’s always watching us (or so he sez in this video), and we’re always watching him:

Posted by Media Funhouse at 2:25 PM