NYC's MTA has slowed down service until soon nothing will be running at all…. 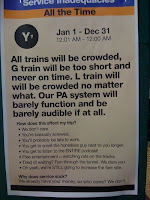 No, the title doesn't refer to New York becoming a Warriors or Streets of Fire-type landscape in an "alternate future" (although I often speculate on how easily that could happen). I just feel compelled to return to the topic of NYC's dreadful little tin-cans of horror, although I can’t really add much to what I’ve said in past blog entries.

Except, of course, to note that the MTA is crying poverty once again, as they always are. Now we know they lie on a regular basis, so it’s lovely to find that, just this week, as they took a whole bunch of completely necessary bus lines out of commission (stranding many riders in the outer boroughs — the lands the MTA is most apathetic about) and discontinued two subway lines, that the service has been absolutely awful. Worse than ever, and that’s saying something. 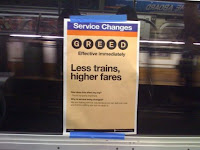 Perhaps the goal here is to re-establish that the citizens of NYC are dependent on them. Creating the wonderful fictions (which do indeed occur in real-life, but several of them in one day on the same two or three train lines — wow, what a coincidence!) of “police actions,” “track fires,” signal problems,” etc, etc, ad nauseum, must be exhausting, but they’re surely wanting to raise the fare, since none of the people who run the MTA take the damned trains and buses in the first place.

It's often been noted that cops should be forced to live in the communities they serve, just so they would know exactly what life in that neighborhood is like, and so they can’t escape to the suburbs at day’s end and think of the people who live in their precinct as “the Other.” I think the same should be true of the MTA. And while we’re at it, why not stick the tiny billionaire who bought himself a third term onto a subway running from Brooklyn to Queens, or the Bronx to Manhattan, or an outer borough to fucking anywhere. Have them ride the Frankenstein creations they’re responsible for on days like the past few, when a really sprightly tortoise could outrun a subway train in this town. Just an idea.

The movie/TV/music stuff continues above, but I must give complete credit to the source for the images seen above. They came from the the Remixed Metre blog, who says he got them from the Gothamist website, but I could only retrieve them from his site. So there.
Posted by Media Funhouse at 9:58 PM

Those signs are fantastic!