I am of two minds about the weird little sub-genre of standup known as “prop comedy.” I grew up loving the stage shtick of Rip Taylor and the intentionally awful comic magicians Carl Ballantine and (cue “Fine and Dandy,” will ya?) Art Metrano. I also enjoyed as a kid the ultra-frantic Lenny Schultz who, while not a prop comic exactly, worked in same busy-ass mode. I never was a fan of what Rip Taylor hath inadvertently wrought, though — you know I’m talking about Gallagher and Carrot Top (whom Bill Hicks referred to as the comedian “for those who find Gallagher too cerebral”).

Thus, when I found out this week that Gallagher is now a pissed-off, bitter old dude, I was conflicted: I’m naturally prone to feeling sympathetic towards older performers who feel left out in today’s show-biz world. But, since I could never take large doses (or small doses) of Gallagher when he was at his peak of popularity (and for those who weren’t around, or who don’t remember, he was HUGELY popular at one point), I guess I’m slightly happy that he’s now a really fuckin’ angry prop comic who spews racist, sexist, homophobic jokes before he gets around to the Sledge-o-matic bit that seemed moronic when he started doing it more than thirty years ago. 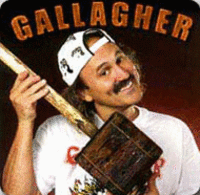 This week an article appeared on a Seattle alternative website by Lindy West that chronicled a Gallagher show she recently attended in Bremerton, Washington. It’s a pretty nice American Gothic portrait of a comedian who never was a curmudgeon to start out with — he was a sprightly crazy guy who came out on rollerskates, told jokes about how he was “stuck in the Sixties,” and then walloped the shit out of some produce with a goddamned big mallet. Comedy gold, you say? Well, millions of people liked it during that period of cultural blight we now quaintly refer to as the Eighties. In her article West recounts Gallagher’s latest jibes against pretty much everybody who ain’t a white middle-class person (he claims that “we” are descended from Viking stock — isn’t the name Gallagher Irish? ’Twas the last time I checked…). It’s pretty eye-opening, and opens the way for the next descent into prop-comic madness (and I do mean *mad*-ness) that I found after reading West’s piece.

In December 2009 David Wolinsky of the Onion AV Club interviewed Gallagher, who spoke out against the “mediocrity” infesting American comedy today. I mean, he’s actually got me there — just visit any multiplex and see what is labeled “comedy,” and try to contradict the fact that the Golden Age of American Comedy is long, long behind us. But, then again, this isn’t coming from a still-with-us comedy god like Jonathan Winters. This isn’t coming from Woody Allen or Mel Brooks or Sid Caesar — this is coming from the guy with the “skullet” (oh my god, those Eighties terms) who still to this day closes his act by smashing a watermelon with an oversized mallet. For that reason alone, you gotta be fascinated by the guy’s anger.

And then, if you’re as much of a fan of descending down the rabbit hole as I am, I urge you to check out the story of “Gallagher Too”. The fact that Gallagher was so monstrously popular his sorta-lookalike brother could tour doing the same act and have a steady career is mind-boggling (further proof the Eighties wrecked the fuckin’ culture). The sad fact that the brothers never speak any more because they had a sort of metaphorical Mexican standoff with their really funny oversized mallets is even more deliciously, pathetically, compulsively readable. I walked past the lookalike brother many, many years ago in the area near Madison Square Garden, before I knew that there was a “Gallagher Too,” and kept wondering why anyone in his right mind would dress like the Sledge-o-matic guy. A paycheck will do strange things to a person.

The only thing these articles do, of course, is make you speculate as to when/where/how Carrot Top will crack. The fact that he metamorphosed somewhere in the Nineties into a bodybuilder who sported arms that looked like they’d been borrowed off of Popeye seemed like a small indication he might change his act. But he remains in the business and continues to be pretty much the leading prop comic in the nation. As for me, if I want to see a specialty act, I would far prefer a guy (or gal) who makes mouth noises for a living. Anyone got a line on Michael Winslow?

P.S. I thank Tim Carvell for turning me on to the original Stranger article. Also, as I looked for pics to go with this post, I found yet another rant-y kinda interview with Gallagher that includes the amazing sentence “There’s a lot of money in hatred.” Whoa baby!
Posted by Media Funhouse at 11:04 PM

I have never been a fan of Carrot Top and have only seen fleeting glimpses of his act when he's been on the Tonight Show, but I have been aware of him. I have also been puzzled by his seemingly sudden metamorphosis into a giant muscle, but even more weird: what's with the eye makeup? Am I wrong or does the dude wear eyeliner? In any case, the combo of muscular hypertrophy and face makeup, hypermasculinity and feminity combined, makes for a very off-putting and bizarre caricature of a human being. I have wondered if his arms, so exaggeratedly enlarged, were not, in fact, implants!

I used to work as a desk clerk and cashier at a hotel by Laguardia Airport back in the 80s, and one night Gallagher checked in. He seemed pleasant for the few moments I interacted with him. I guess aging into relative obscurity must have driven him crazy.

(There were other celebs who I helped check in or out: Linda Blair, Bob Hope, Jam Master Jay, Patricia Neal, George Thorogood, Paul Stanley, the American Nazi guy that checked out to go to Manhattan where he taped a Geraldo Rivera show and he broke Rivera's nose with a thrown chair, Rowdy Roddy Piper, Porter Waggoner, various NY Mets, and others I'm sure I've forgotten.)

For reasons I cannot disclose, I've had a long talk with G. And I've seen G II in concert. I've also talked to Michael Winslow (a nice guy, but those noises get old after fifteen minutes).

G II was happening around late '90s-early'00s. I saw the brother (I had to for employment reasons) and he was all the jokes of the real Gallagher, none of the energy. It was the worst thing I've seen on stage, ever.

I talked to the real G in'03. He was really upset about kids with pants hanging low, and about all those war protesters driving Hummers to protests, and ladies (lesbians, surely!) wearing bib overalls. I steered him to talking about something he had a reason to be upset about -- his brother. Then he got cranky.