I’ve sung the praises of great character actors on this blog before, so I have to note the death of James Gammon, who was both a good actor and a real presence onscreen. He had the look and the feel of a guy who’d seen a lotta life in his years, and thus even if the movies you watched him in were absolutely dreadful, he was 100% authentic. 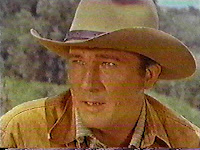 His weatherbeaten looks ensured that he constantly got roles in Westerns, backwoods dramas, and family sagas, usually with an alcoholic character at the center of things. The guy worked steadily for five decades, and I should note that one of his first credits (after the always awesome Wild Wild West) was Captain Nice, the show that starred… Ann Prentiss (see entry below). Gammon did a LOT of work, and while I like his gruff-overdose in the brilliantly dopey Cabin Boy, the man had a serious reputation as a theater actor, having collected Los Angeles Drama Critics Circle Awards, and being someone for whom Sam Shepard groomed roles.

To honor Gammon, I uploaded a short scene from the documentary This So-Called Disaster (2003), which shows Shepard directing a production of the play The Late Henry Moss in San Francisco in 2000. Gammon plays the title role, and proves himself equal to his movie-star colleagues Nick Nolte, Sean Penn, and Woody Harrelson. Check out Gammon’s voice and stage presence: