The death of the actress Arlene Golonka on Monday of this week — who radiated a cheerful, adorable, and slyly sexy presence and was ubiquitous on TV in my kidhood — led me to this particular discovery. While it might not be as laugh-out-loud funny as I had remembered it, it’s still a wonderful slice of Sixties absurdist comedy that boasts a great cast and some terrific NYC locations as its “sets.”

The first time I encountered this telefilm was with a friend at the then-Museum of Broadcasting (now the Paley Center) around the corner from the Doubleday bookstore on 53rd Street and Fifth Avenue (a store I worked in for a few months and which features in the Streisand-Segal Owl and the Pussycat).

At that point, early in the museum’s history, you sat in a cubicle and a staff member came over to put your chosen tape (not sure if it was Beta or VHS at this point) in a deck. You were allowed to rewind and fast-forward it at your leisure. For some reason I remember the Museum’s version as being in b&w, but the YouTube upload is in very faded color. (Although it contains the original ads, all for Burlington.)

“The Love Song of Barney Kempinski,” the debut episode of the series ABC Stage 67, looked intriguing from an entry in the mass-market paperback The Television Years by Shulman and Youman (yes, we’re talking heavy pre-Internet geekdom here). The names of Alan Arkin, Arlene Golonka, and Murray Schisgal were already known to me, so I was eager to see it when I visited the TV museum. (Everyone has always called the institution that, no matter which of its three names was in use at the time.)

It’s been more than four decades since that initial viewing and while the sum of its often-great parts does not make a perfect whole, it’s still very much worth watching.

First, some words about Schisgal, who died on Oct 1 of last year. Viewers of the Funhouse TV show will remember that I did a series of episodes saluting “Sixties comic playwrights who were not Neil Simon.” (The theme being that these folks were less gag-oriented than Simon and also wrote wonderfully poignant sequences.)

Among this number were Funhouse fave Herb Gardner, Renee Taylor and Joseph Bologna, and Schisgal. Schisgal eventually became a “house-rewriter” for Dustin Hoffman, polishing scenes in movies Hoffman starred in, but in the Sixties Schisgal was a force to be reckoned with, writing tight, smart one-acts (“The Typists,” “The Tiger”) and one classic full-length play (Luv).

More than any of the others cited above — and quite like Bruce Jay Friedman, whose comic plays Scuba Duba and Steambath were both weirdly and brilliantly dark — Schisgal was clearly aware of the work of the modern European playwrights, most prominently those in the Theater of the Absurd. “Barney Kempinski” heavily exhibits this influence.

One more detour before I discuss the show itself — a bit about the amazing experiment that was ABC Stage 67. The series, which lasted only one season, was most certainly a precursor to later PBS programs like The Great American Dream Machine. One unique connection was the fact that Elinor Bunin designed the titles for both ABC Stage 67 and Dream Machine and later was the creative director for WNET Channel 13. Stage 67 jumped from genre to genre with 26 episodes (which would’ve been 27, but Dylan’s Eat the Document was rejected because it was incoherent — a very solid judgment). 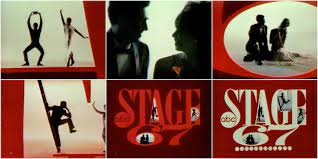 21 of the episodes are available at the Paley Center, with the never-seen-again titles being very fascinating: A John Le Carré thriller with James Mason; documentaries on JFK and Marilyn (separate ones, spaced far apart); an Earl Hamner Jr. drama with a crazy cast (Pearl Bailey, Phil Harris, Lee Grant, Mort Sahl, and Jackie Robinson!); a Bacharach-David-scored musical with Ricky Nelson; docs about WWII and sex in American in the Sixties; a Rodgers and Hart songbook show; short films about teen boys; David Frost hosting “A Night Out in London”; a Comden-Green-Styne musical with Dick Shawn; and a “Look at Negro Humor in America” with Dick Gregory, Godfrey Cambridge, Redd Foxx, Moms Mabley, and Richard Pryor.The four episodes that did become available on VHS and DVD are: Sam Peckinpah’s adaptation of Katherine Anne Porter’s “Noon Wine”; Ingrid Bergman in a production of “The Human Voice”; the Emmy-winning “A Christmas Memory” by Truman Capote, working with Eleanor and Frank Perry; and “Evening Primrose,” an original Stephen Sondheim musical about a poet (Tony Perkins) who lives in a department store at night!

Before any of those episodes aired, “The Love Song of Barney Kempinski” was the premiere episode of the series (air date: Sept. 14, 1966). It is a thoroughly odd, often charming absurdist comedy that follows drifter Barney Kempinski (Alan Arkin) on the day of his wedding, as he moves from job to job. He talks to the audience about the wonders of NYC, yelling all the while as he “appropriates” a cab (he’s basically an opportunist and thief but a charming and clever one), then an ice cream cart, a butcher’s delivery truck, and a helicopter, among other vehicles.

It’s performed at a high pitch — Barney is prone to shouting (even when he’s happy) and he often bursts into a song of his own invention (which we hear under the end credits in its entirety and was apparently released as a single at the time). He shows us pictures of old NYC, as he wanders through the locations as they appeared in 1966 (the year the show was filmed): the Lower East Side, Chinatown, Little Italy, and the Village, all the way up to Lincoln Center.

On the way, his various “jobs” find him blundering into various situations — into the middle of an argument between a rich couple (Lee Grant, Alan King); a couple having sex (demurely depicted, of course); an Indian man meditating, on whose person Barney searches for money (as a tip for the package he’s delivered).

Since the film is made up of vignettes, it follows the fashion of episodic creations, with some of the scenes being very funny and some falling flat. The only semblance of a plot is that Barney is hoping to marry his sweetheart at 3:00 p.m. at City Hall and, as she evades him (going to the movies at 9:30 a.m.!), he falls in love with her sister (Arlene Golonka).

The “tour guide” aspect of Barney’s character (another job he “appropriates”) makes the film a true time capsule. Surely Schisgal predicated his script on this idea, but one can be pretty certain that the late, great, Ralph Rosenblum had a lot to do with how beautifully it is carried off. Rosenblum edited and was co-director (with Herb Gardner) of the exterior shots in A Thousand Clowns, which “opened up” what was otherwise a filmed play. (He also, of course edited perfect NYC films like The Pawnbroker and The Producers.)

The cast sell “Kempinski” wonderfully. The supporting players are NYC performers who worked in theater and TV: Lee Grant (who remembered here a stunt she had to do on the show), Alan King, Charlotte Rae, David Doyle, Jose Perez, Leonardo Cimino. And Barney’s cab fare is a drunken businessman, played by John Gielgud.

Arkin is wonderful, mostly because his character, as written, is a pretty annoying guy and he makes him tolerable and quite charming.

And the lovely Golonka — yes, she who worked on dozens and dozens of TV shows and a select number of movies. She did indeed possess the ability to play both completely wholesome characters (as in Ernie Pintoff’s Harvey Middleman, Fireman) and also some “naughty” ladies. She will live on in reruns and will always seem just as cute. It’s no wonder that Barney Kempinski opts for her and not her absent sister, and the two ride off into the sunset (or at least mid-afternoon near Manhattan’s City Hall).

As an extra-special bonus, I offer up the super-obscure (but now “hidden in plain sight”) oddity that was Music for Rat Fink Lovers. The standup comedian Jackie Kannon, who performed slightly “blue” material, recorded several albums, had a best-selling book of naughty poems (Poems for the John), and also ran a nightclub called the “Rat Fink Room” in mid-Manhattan (located at 151 East 50th Street).

Kannon was stuck on the phrase “rat fink” and so he released a few albums with that phrase in the title. The oddest is Music for Rat Fink Lovers, an odd concoction that was comprised of regular Mantovani/Kostelanetz orchestral arrangements of then-popular tunes, with a sexy female coming on at the end of every track and saying the phrase “rat fink” in one mood or another (kittenish, delirious, angry, giddy, sexy). That voice was — Arlene Golonka! 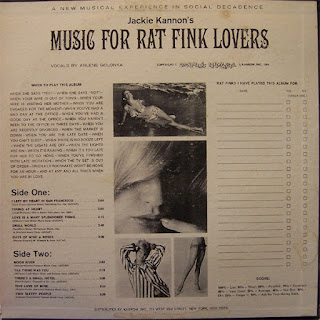 It turns out that the entire album has been uploaded to YT and can be heard song by song or in a playlist that reverses the sides of the LP. For some inexplicable reason, someone took the album cover and identifies it in several separate uploads as a record by Dickie Goodman, but it definitely was a Kannon creation. (Although where he got the instrumental tracks from isn’t known — Arlene was lucky she got credited!)

The gimmick here is not only that Arlene says something sexy or “girly” at the end of every instrumental track, but that the record finishes up with Kannon’s own voice saying (in Yiddish-accented English) that he’s “the dirty rat fink.” First, a giggling delivery:

Then a sexy, cooing Arlene:

Posted by Media Funhouse at 4:48 PM No comments: