The last two tunes in the Xmas misery megamix

On the last day before Xmas, I wanted to add a final “footnote” to my Xmas misery megamix (go here for the full dose) with perhaps the most unusual items. There are only two of 'em because... hey, it's Xmas Eve when I'm posting this and you don't have a lotta time, do you?

First, a skronk-y Xmas carol that is an epic of discordance and irritation – you'll either love it or hate it (it's entirely possible you'll have both reactions). I have friends who rave about James Chance's music, and I can't help but think that's because they saw him live. Experiencing him through recordings is still a confrontation of a sort, but it also can be sorta tiring – although here I note that he's backed by women backup singers, who lend a tiny bit of on-key-ness to the proceedings (esp in the final repeated refrain, “Are you weepin' and waitin'/for Christmas with Satan?”).

The song is a ten-minute opus called “Christmas with Satan” and it contains not just Chance's meditation on meeting the Horned One on Xmas day, but also horn-driven "skronk" riffs on various familiar holiday staples, including “Santa Claus Is Comin' to Town,” “Winter Wonderland,” “White Christmas,” “Rudolph the Red-Nosed Raindeer,” and “Hava Nagila” (who knows?). This aspect of the song makes it a nice one-stop-shop for those who want to cover the usual Yuletide territory quickly and with irreverence.

Take the trip, the fare is cheap.


And the piece de resistance (thanks to friend Rich Brown for this!) has to be Willie Tyler and Lester's sad little December ditty – it's less an Xmas song than an end-of-year song about going home and seeing the family.

It's a somber affair, but the best part is that Willie didn't forget his little wooden pal (who he's been touring with for something like five decades!) – Lester duets with him on the tune and even gets a little Stylistics-like trill (around the 1:23 mark). I can think of no better way to seal off my “Xmas misery megamix” for 2015 than by giving you this song that I believe Willie wrote himself.

The more I watch this video the more I love Lester's hat and the way his tiny little wooden hands move to accentuate lines in the song.

The "Xmas misery megamix" can be found here. Happy Holidays to all
Posted by Media Funhouse at 2:48 PM No comments:

The holiday approacheth... and there *is* listenable music (plus: bonus Xmas misery!) 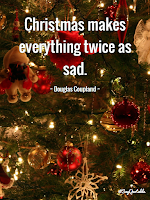 I posted a few weeks back about the misery that accompanies the Yuletide each year – the salesmanship (on many levels), the creation of an American mythos of the holiday, and the music... oh yes, the music. I of course first and foremost want to draw your attention to my “Xmas misery megamix” here, but I also wanted to add a few “footnotes” and draw some attention to some older pieces you'll find on this blog.

First, there's the question that some folks might've asked themselves after reading my celebration of the imaginative ways that songwriters have celebrated/chronicled the emotional underside of the holiday: “well, what DO you like in terms of Xmas music?” Four years ago I celebrated three brand new (well, they were then) Xmas songs. I still love all three of these tunes – one by Tim Minchin, one by the mighty “Sherwin Sleeves,” and the last by Andy Ditzler (with a no-budget music vid by Funhouse deity George Kuchar). Watch them here.

Each year there's generally one new Xmas song that I do enjoy, usually because it's catchy or amusing. This year I'd nominate a tune by “Loose Tapestries,” the band headed up by the Mighty Boosh's Noel Fielding and Sergio Pizzorno (of Kasabian). The gent doing the midsong rap is none other than actor Idris Elba. The whole thing is damnably catchy (even if the video is unashamedly “Gilliam-esque” – perhaps to promote Terry's new autobio?):

I also direct your attention to another blog post I put up in 2011 (a busy holiday that year!), concerning Jewish comedians doing songs about Xmas: the Albert Brooks (his track wasn't a song but it was a 45!), Marty Feldman, and Jerry Lewis. I uploaded to YT the Feldman and Lewis songs. Listen to 'em all here. 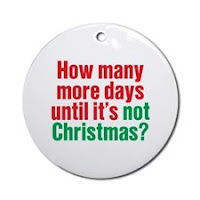 Now for a few “footnotes” to my Xmas misery playlist. First, a “glitter” pop band doing a Fifties-sounding “I'm sad during the holidays” ditty. I didn't want to include “Blue Christmas”-esque items in the misery megamix but was intrigued to find this sucker after I wrote the piece. The band Mud were best known for their hit “Tiger Feet” (in which the singer praises his gal's “tiger feet” – I have no idea....). Here the lead vocalist does his impression of a classic r'n'r singer (in 1974) as he laments his upcoming solitude:

For a lovely statement of purpose, we have the British indie band Denim (whose leader formerly ran Felt – material jokes should be inserted here). Their Xmas tune was the wonderfully mopey “I Will Cry at Christmas." The song has the singer rejecting his lover, so he's not as innocent as the title suggests. Catchy, poppy misery:

And because everything I've offered up thus far in this entry is pretty damned upbeat and catchy, here's a song that is mostly gloomy atmosphere, Suicide's “Hey Lord” from 1981. This is some heavy Yuletide depression, truly the antidote to (I summon its sprightly soul again) Andy Williams' “The Most Wonderful Time of the Year”:

As the merry-bells keep ringing, Happy Freakin' Holidays to you!

Thanks to Steve Korn and Merry Brosnan for two of the musical suggestions above.
Posted by Media Funhouse at 2:13 PM No comments: