Reasons to be Cheerful, Part Four 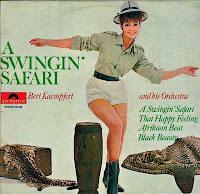 Since this is officially the day I turn “another year old and deeper in debt,” I’m going to just slip backwards in time (which comes easily most of the year, even easier on birthdays). I’ve talked before on this blog about Sixties and Seventies “easy listening” music (aka elevator music) that was burnt into my brain at a young age, and continues to conjure sensations of that era when I hear it.

You can find entries about punk artists and psychedelic artists and bubble-gum artists elsewhere on this blog, but for this entry, there are no lyrics, and it’s just “MOR” easy listening tracks that were hits and became the wallpaper to our daily activities back then. (And remain a sorta “comfort music” for those who had this piped into their consciousness.)

Most of the songs I’ll be linking to are in the Herb Alpert/Burt Bacharach/bouncy pop number category (I’ve already paid tribute to numbers like ”Classical Gas”), but I thought I’d start off with one that predates those songs and instead has a nice little depressing edge to it. It’s an evocative little number called “Last Date” by Floyd Cramer, the master of the “slide piano” who was a legendary session player in Nashvile. On its own the song has a sort of downbeat, last-call-at-the-bar feel, but when you find out the title, you sorta get the drift:

And since I don’t want to slide into a “saloon song” coma with these tunes, I’ll offer another Cramer number, this time incredibly fuckin’ bouncy and catchy. This was recently used in the soundtrack of the movie An Education (which I still haven’t seen; I found this on, where else, YT). It’s called “On the Rebound” and although “jaunty” is a word you’re supposed to use to describe people and not music, it’s pretty damned jaunty:

I’m going to skip past two of the most obvious songs that belong in the category of cheerful instrumental, “Java” and “Alley Cat,” and proceed onto one that most people of a certain age (what a remarkably diplomatic phrase, that) know, but don’t know the title of, Dave Baby Cortez’s “The Happy Organ” (all genitalia jokes will be happily skipped past too):

And one of the other songs that seeped into the brainpan back then was this sucker, which was recorded and became a hit by Billy Vaughn and Bert Kaempfert. This version has a jungle girl-themed video, so it seemed to be the one that needed linking:

Continuing on with Kaempfert, there is only one pop tune I know of to have a chart status (in the U.S. at least) that had the word “Afrikaan” in the title. That was “Afrikaan Beat,” and Kaempfert definitely led the way to the style of Herb Alpert and the Tijuana Brass, although Herb “Latin-ized” the sound.

Most of these songs are best-remembered in their single versions, but here’s a live rendition by Kaempfert of “That Happy Feeling.” The word “bouncy” doesn’t even convey the damned thing, but it must also be noted the tune has a special resonance for those in the NYC area in the early Sixties, as it was used as the theme to the afternoon children’s show The Sandy Becker Show. And what makes the vid special? You get to see the handclaps, a key part in any mercilessly hooky Sixties tune:

There's a bottomless pit of instrumentals you may know the tune of but can’t name, like “Wheels” by the String-a-longs. Then there are the songs that AM-radio listeners knew all too well, but are still as pleasant to re-hear decades on, like “Grazin’ in the Grass” by Hugh Masekela. The hit with vocals (and the insane “Icandigityoucandigithecandigitshecandigit”) was done
by the Friends of Distinction. But the Masekela original is the instrumental great:

Months ago when I did a little Deceased Artiste tribute to
Raymond, Lefèvre, the man who gave us the infectious instrumental “Soul Coaxing,” I was of course reminded of the best-known French instrumental of the Sixties “Love is Blue” by Paul Mauriat. Since I am fixated by the unnecessary vocal versions of these songs, I offer you the vocal version by Al Martino, but here is the Mauriat originaL: 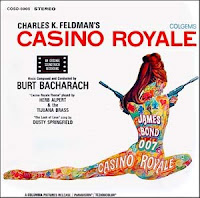 On an album-cover associative level (painted womyn), here is the indelible Burt Bacharach-penned Casino Royale theme by Herb Alpert. I’m not a soundtrack aficionado per se, but this is one of the OST LPs I will dig out and spin every few months. It definitely buoys the spirits:

Since we’re on the infectious route, here’s “No Matter What Shape (Your Stomach’s In)” by the T-Bones, which was used in a TV commercial about heartburn which is here:

And if we’re going to go deep-Sixties, you’d have to resurrect
Andy Williams’ “Music to Watch Girls By” clip which is endearingly corny as fuck. Andy sang many, many of the instrumental songs that they wrote ridiculously impromptu lyrics for. One YouTube uploader maintains that the Andy song was the original in this case, but the Bob Crewe Generation (nobody calls their band the “Generation” anymore, more’s the pity) had the hook-ridden instrumental hit:

And I’ll close out with two tunes whose titles I didn’t know until recently. The first is the insanely infectious “Soulful Strut” by Young Holt Unlimited. This is supreme stuff:

Since we must move leave the Sixties behind, let’s do that to enter the Seventies, with the 1972 hit “Joy” by Apollo 100, which was sort of the 45 RPM super-pop version of the more pretentious art-rock stuff Emerson Lake & Palmer were carrying out in that era. Alternately brilliant and immaculately cheesy, it won’t exit your noggin anytime soon:

If anyone has any infectious instrumentals they want to leave links to, drop 'em in the comments! UPDATE: The comments contain a bunch of suggestions from M. Faust that include at least two songs I know had (natch) unnecessary lyrics sung at one point by Andy Williams! (The "Romeo and Juliet theme" and "Love's Theme") The Midnight Cowboy theme is almost too sublimely movie-related to have fit in here (but musically it does), and Hot Butter's "Popcorn" is infectious as hell (and well utilized in a party scene in Shriek of the Mutilated; the sequence is not on YT).
Posted by Media Funhouse at 3:36 PM

Such rich sampling of the zeitgeist is enfolded in my DNA and plays forever!

My uncle had the 45 of "Washington Square," and I played it many times. Great one, thanks Tristeza!

This is a bit off topic (80s not 60s and not a single release), but try to get this out of your mind:

... but most of all this, the penultimate in audio crack, especially the last two minutes:

(The ultimate is a slightly slower version that I can't find on YouTube. Nanni Moretti fans may recall it's appearance in THE SON'S ROOM).

OK, here's one that's on topic, and I KNOW it's one you meant to include, Ed:

That big big hit from the summer of 1969: (many versions of this on YouTube, most performed by amateurs, but I thought you'd enjoy this one)

Another one I know you meant to include: (and one I can play on the piano!)

Big, cheesy, irresistable (at least two of which adjectives apply to the composer/performer)

Guessing you covered this one somewhere else - not the 60s, but the same year as Apollo 100 (I have their album and love it dearly)

You're going to have to take my word for it that this went top ten in 1969 (albeit in a shorter version that I can't find on YouTube):

Not as muzaky as I think you're going for, but catchy as hell and an unambiguous hit (and from the same year as Edgar Winter's "Frankenstein")

A little more on target, a hit from 1961, Jerry Lee Lewis meets Tchaichovsky:

I knew this had been a hit, but I couldn't remember how it went until I looked it up - arpeggios that even Liberace would find extreme:

The grandaddy of this kind of thing (god, I love French horns!)

My dad had this album. The Who with tubular bells! When I talked to him over Father's Day I told him in no uncertain terms never to let my mother make him throw out his remaining LP collection!

Weren't we discussing this recently? Even better than "Linus and Lucy" (the official name of the Charlie Brown piano theme):

Another bonafide hit - I'm kinda appalled to find that I like this now:

Another one I never knew the name of, but it was a staple on the muzak station we had to listen to at the drug store where I worked during college:

Another one from my dad's LP collection (and every other dad of my era, I'm sure):

Dunno what this muffer's so happy about, but he is ...

Another one that epitomises what yer talking about, Ed (I realize lots of these got far off base):

Alright, I'll stop now, but surely there's room for this: