Flying through the streets of San Francisco: Deceased Artiste William A. Fraker 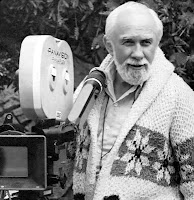 In months past, I tried to keep track of the full-length films that were hiding in plain sight on YouTube. I’ve had other things to write about in the time since, but it’s not like the influx of uploads has stopped or anything. I offer as evidence of the raving fandom (and you have to be a fan to take the time to upload a feature film onto YT piece by piece by piece…) clips and entire features that showcase the work of cinematographer William A. Fraker, who died this week at 86.

Fraker is credited with additional photography on the surprisingly good Esperanto-Shatner horror pic Incubus, but his mainstream bow as d.p. was the Curtis Harrington thriller Games. He next did the very evocative The Fox starring a personal fave, the always on-edge Sandy Dennis. The film’s look is beautiful, and most of the picture is on YT:

One of the most successful films he worked on was Rosemary’s Baby. Here is the trailer for that classic (which was on YT, but has obviously been taken down or “hidden” under a fake name):

Most interesting is a film I haven’t caught up with, Dusty and Sweets McGee. The very intense and well-scored opening of the film used to be up on YT, but now only this dramatic scene can be found. Still looks like a fascinating movie:

Fraker shot additional scenes for One Flew Over the Cuckoo’s Nest (which is indeed up in its entirety on YT), and did terrific work on Richard Brooks’ atmospheric time-capsule pic Looking for Mr. Goodbar. The trailer is here. The last film to fascinate me that Fraker worked on was the wonderful train-wreck known as The Island of Dr. Moreau. Good to know that Fraker’s camera beheld the always magical Nelson de la Rosa (not to mention mountainous Marlon):

Posted by Media Funhouse at 1:01 AM