In the writers’ room: the late 1980s Steve Allen radio show, with Bob Einstein and others

Hearing really smart people being really silly is a rare delight. One of the smartest and silliest comedians in American TV history was Steve Allen, who (like the equally sublime Sid Caesar) was keen to surround himself with really funny writers. So it came as no surprise that when he returned to radio at the end of the Eighties he invited on his show not only standups and singers (he hosted each show with a piano in the studio) but also an ample amount of comedy writers.

I have incredibly fond memories of this radio stint by Steverino, which began in 1986 on local WNEW-AM (the one-time home of “the Make-Believe Ballroom” and “the Milkman’s Matinee,” of William B. and the wonderfully versatile Gene Klavan). I had a tedious data-entry job at the time and was laughing out loud from the flow of one-liners and puns — thankfully that job allowed Walkmans (I was so much older then, I’m younger than that now). It later was syndicated on the NBC radio network and sadly became less listenable, since the long stretches of silly conversation between Steve and his friends was broken up by many, many commercials and Steve himself seemed bored by the process.

That’s my memory of the show, but that memory has been challenged by a generous YT poster’s uploading of several episodes from the syndicated show. Said uploader had access to the satellite feed for the program and has woven the off-air breaks in where the commercials used to be. So instead of the agony of endless commercials we now can hear Steve gabbing with his guests and indicating what really fascinated him (or just noodling on the piano when it’s clear he’s bored that day). 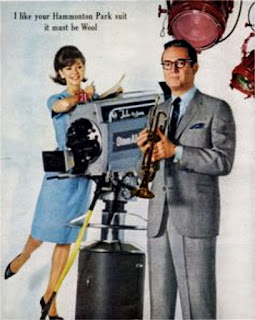 The program was initially done in NYC with Steve and his cohost Mark Simone (now a right-wing talk-radio host, his earlier radio comedy on local stations like WPIX-FM predated the “shock” of Stern and his successors). Then Steve did the show in L.A. via satellite with Simone holding down the fort back in NYC – this was the formula later used by Air America: a comedian assisted by a radio person who could keep the show running on time and let the host know when he or she was about to hit a “hard break.”

At its best, this was the natural precursor to today’s comedy podcasts in that it was really a “show about nothing” that just consisted of Steve riffing with whatever guest came by that day. If no celebrity guest was booked, it was just Steve chatting about random topics with his comedy writer friends. Among those who came on with the most regularity were: Herb Sargent (SNL mainstay and the scripter of Funhouse favorite Bye Bye Braverman), Sheldon Keller, Larry Gelbart, and the recently departed “Super Dave Osborne,” aka Bob Einstein. When the mood was right, and Steve’s mind was cooking, it was indeed like listening in to a writer’s room of comic greats.

The best segment hands-down was “the Sleazy News,” in which Simone would read utterly ridiculous stories from supermarket tabloids to allow Steve and company to make up lines as they went along (and do some very nice call-backs later in the show). Sargent was deadpan as hell and spoke the least of the group, but could usually top whatever was said before him. Einstein was in peak form on the show, mostly because he kept the conversation on the edge, an edge that sometimes went into “adult areas.”

At this time Steve, a renowned liberal for decades, had not yet slipped into his final depressing identity as an advocate of “clean humor” and right-wing values. But he was already in his “clean that up!” mode, so his infamous teacher’s bell was rung quite often in reaction to Einstein’s jokes, which Steve considered somewhat risque. 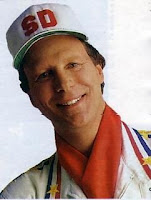 As a listener I believed this was a bit Steve was doing, but in the off-air moments edited into these tapes by the YT poster it becomes clear that he really was concerned about Einstein’s “questionable” jokes. (Although Einstein’s “bad boy” persona on the show kept Steve alert and vital, which resulted in some very funny moments.)

This was also the period where what a friend called Steve’s “professorial” mode truly came to the fore. The comedy writers and Simone had to keep the mood light because Steve, an inveterate research-addict, would suddenly stop the flow of comedy to look up a word that had been used or try to seriously discuss a topic that had been joked about.

These interludes, along with the fact that Steve is audibly heard yawning and conducting business with his secretary (including signing checks on-air), makes one wonder what was really going on with him at this point – he was only 65 but sounded at points like he was heading toward retirement (but he wasn’t, since he continued to make TV appearances and do live speaking gigs until the time of his death at 78).

Perhaps he had become so dispersed in his fascinations that he had a mild form of ADHD, since he could be so easily distracted from the show’s conversational threads — a major pace-killer was when he would stop the proceedings to play through a new melody he had thought of, in hopes it would be his next song. It might just be that Steve, a comedian whose mind was razor sharp, couldn’t constantly be functioning at full tilt, deconstructing the language and playing with ideas and expressions.

But let’s not dwell on the odder aspects of Steve’s hosting skills in the late Eighties. He was one of the greatest natural wits to ever grace the airwaves (ample evidence can be found in his books Bigger Than a Breadbox and Schmock-Schmock!). So when his short-lived radio show (from ’86 to ’88) was at its finest, it was unabashedly silly and delightfully amusing.

The 16 segments that have been posted on YT contain different sublime moments of brilliant, quick humor and all seemingly come from the last week of new episodes. I will point out some highlights and let you check out the rest yourself.

The poster has put these segments up in the order in which they aired. The first one I must highlight is this, in which (at 29:15) Bob Einstein goes that extra mile — doing an impression of Jayne Meadows, Steve’s longtime wife, who seemed to be a real-life Margaret Dumont, existing in a sphere that was prim and proper and miles away from the intellectual and silly worlds that Steve inhabited in his work.

Einstein-as-Jayne is waking up late and trying on different clothing, including a scuba suit. (When he brings the character back later in the show, she asks, “Do you think the shower cap should go under the derby?”)

A prime example of the “Sleazy News” segment, again with Einstein on the phone. Among the topics discussed are stupid things said in courtrooms and a wild Jamaican party that wrecked a Manhattan hotel.

Steve was indeed a modern intellectual, but he also harkened from a different era of show business. So when he decided that he would like to “reason out” what was the problem with Jimmy the Greek’s famous statements about why blacks were so good in sports, everyone in the L.A. and NYC studios kept trying to stop him. It makes for some great swerves, since Einstein, Simone, and Sargent have to keep moving the conversation away from Jimmy the Greek.

A nice “introduction” to Steve Allen (and his many credits) is delivered by Einstein at 13:46.

More discussion of Jimmy the Greek’s remarks, this time with guest Jack Carter. Carter tells an old joke about African-Americans (which isn’t openly racist but is certainly a groaner) and discusses his TV career, which included a late Forties network show that featured performers in blackface!


A fun roundtable discussion and listener phone-in segment, about games the gents played as kids.


A packed house on this episode, as comedy writers Iles and Stein, and the great standup-actor Steve Landesberg join Steve, Mark, Herb, and (of course) Bob Einstein. The last-mentioned gets an “inappropriate” Irish joke in because it’s St. Paddy’s day (at 17:40).


Very interesting discussion off-air with Steve Landesberg about off-color jokes Landesberg used to do in his act (so Steverino *could* listen to jokes with dirty words in ’em; he just got crazy about anything even moderately saucy being said on-air by the Eighties). At that point Allen tells Landesberg he believes Bob is doing more questionable jokes “to bug me.” (Meaning, again, that it wasn’t just shtick when Steve disapproved of what Bob had said).


More of the Iles and Stein/Landesberg episode. Steve does a priest character (“Father Mulcahy”) with a few good lines — Steve’s tossed-off remarks on the radio show were far funnier than the scripted sketches. Einstein does his excellent “Jaynie-bird” impression again at 15:00.

In this part of the same episode, the conversation turns to gag writers for U.S. presidents (of course, Reagan was in office when this show aired).

Even more of the Iles and Stein/Landesberg show. Bob is “warned” about his bad boy behavior by Steve around 3:00 of the next video. For some reason, Steve did let Einstein go anywhere comedically. (Btw, the mentions of picketing have to do with a writer’s strike that was going on at the time.) Iles and Stein contribute to the conversation at 30:00.

A great “Sleazy News” segment around 43:00, but also interesting to hear Einstein asking Steve about the end of the radio show at 26:00. Steve felt it was taking up too much of his time and slowing down his book projects and other engagements. If the show hadn’t become as riddled with commercial breaks as it did on the NBC Network, I would’ve disagreed with his decision.

More group insanity in this segment, including a discussion about gorilla women and alligator men at the beginning. Also, talk of UFO landings and Paul Winchell. Jim and Henny Backus show up as the clip continues and Steve discusses game shows and how they are massive moneymakers (since they cost so little to produce).

One of the most interesting segments here is an off-mic chat in which Steve and Bob Einstein discuss the investments of Merv Griffin.

The final segment features Jim and Henny Backus going over Jim’s career in some detail. Steve notes how the hour they’re in was the final original hour of the program but reruns would be run for several weeks afterward — if I remember correctly these were tapes of the earlier WNEW shows that were wonderfully funny (but were, of course, cut to the NBC Network standard, with the maximum amount of long commercial breaks).

Posted by Media Funhouse at 1:06 AM No comments: