Last week singer/TV host Joya Sherrill died at the age of 82. Sherrill had a long career in show business, distinguished by her work as a vocalist for Duke Ellington and as an NYC local kiddie show hostess. She was 17 years old when the Duke hired her to sing with his band. She worked with him on and off for the next few decades, and had hits with the group, including “I’m Beginning to See The Light”: 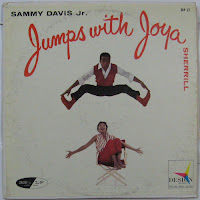 As I was reading Ms. Sherrill’s obits, I realized that I have her duet album with Sammy Davis Jr., Sammy Jumps With Joya. In the more thorough onine biographies like this one, it is revealed that a turning point in her career as a singer came when she toured the U.S.S.R. in 1962 with the Benny Goodman orchestra (purportedly making her the first American jazz singer “to appear behind the Iron Curtain”). She scored a hit with her Russian audience, but Benny Goodman made sure not to include her on the live album he released from the tour. 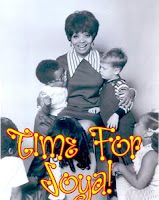 The part of her career that resounds with people my age was her eventual transformation into a local NYC kiddie-show host — she is celebrated as being the first-ever African-American woman to play that role. She starred in the low, low-budget show Time for Joya on WPIX-TV from 1970 to 1972, and the show’s later incarnation, Joya’s Fun School, was new only from January to March 1972, but this thorough article reveals that the ever-thrifty PIX (which I wrote about here) ran those three months’ worth of shows for the next ten years, until 1982! 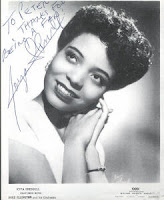 In any case, Ms. Sherrill had a pretty interesting show business career. Since none of her shows exist on tape (not saying much for WPIX’s archive in this case), I will close out this little remembrance with another link to the TV Party article that has the full audio of the August 30, 1970 episode of Time for Joya, which featured as a guest her former employer, the one and only Duke. The show is very laidback as Joya sings the Ellington composition “Heritage” from the show “My People.” Duke also tells the story of the Three Little Bears to the kids, and you can hear what a local low-budget Seventies kids’ show sounded like (it’s a shame there’s no video, but we can be grateful to the gent who supplied TVP with the audio).

And, as two final goodbyes, here’s a perky little ditty that Ms. Sherrill did as a jazz singer that could’ve easily become part of her kids’ show:

And a later upbeat tune, with the wonderfully provocative title “Do Me Good, Baby!”:

Posted by Media Funhouse at 9:25 PM