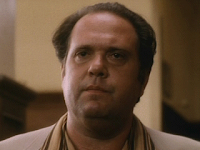 I’m not trying to stay in a “locked groove” on the subject of character actors, but when one of the major players from the world of supporting folk Up North takes a powder, a short salute is in order. Maury Chaykin was one of those few performers whose presence in a film seemed to signal “this film was shot in Canada” for a lot of the Eighties, Nineties, and then the 2000s. He had sturdy supporting roles in both comedies and dramas, and was featured in Canadian films, American films shot in Canada, and American films both indie and mainstream (yes, even the dreaded Dances With Wolves and My Cousin Vinny benefitted from his character work).

For those regular moviegoers who are aware of character people, Chaykin was literally everywhere, so it was interesting to learn that at the time of his death he was only 61 years old. Born in Brooklyn, raised in NYC, and having graduated from the University of Buffalo, Chaykin moved to his mother’s native country of Canada as a young man, and the rest is character-person history: one of his first roles was in an episode of The King of Kensington with Al Waxman (another thoroughbred character guy whose name always, always signaled “Canadian funding”or, yes, “tax shelter”!) and one of his last performances was in a mockumentary fake-reality show spinoff of The Trailer Park Boys. Thus, while he could play many ethnicities and different sorts of individuals, he definitely was a proud Canuck, even when appearing in such mainstream American fare as Boston Legal and CSI.

I haven’t seen Chaykin’s best-regarded film, Whale Music, in which he plays a Brian Wilson-inspired character, and it unfortunately isn’t represented online. A lot of his work is indeed found in the obvious place; it seems that the bulk of the attention he got online was for his starring role as Nero Wolfe in A Nero Wolfe Mystery, which was on A&E from 2001-2002. Entire episodes of the show are up on YouTube, and fans have selected their fave moments like this one where the very staid “Stout detective” [pun=bad] gets angry:

A few interviews with Chaykin are online, including this one with he and Kid in the Hall Mark McKinney, about the dysfunctional family sitcom Less Than Kind, which McKinney produced and found Chaykin playing an angry dad. Possibly the best view of Chaykin (and a nice little insight into the mindset of a dedicated character actor) is in this mellower-than-mellow interview with a Canadian DJ type (very Seventies FM radio, extremely laidback), who interviews him about his work on Less Than Kind, his childhood and parents, his dual citizenship, his thoughts on L.A., and what it was like to be a character actor (and whether that term is an insult to a performer):

Some of Chaykin’s best work was done for one of the greatest Canadian filmmakers, Atom Egoyan, from The Adjuster to Adoration. Here he’s interviewed about his work with Egoyan on the latter:

Finally, two snippets of Chaykin’s work with Egoyan, the trailer for The Adjuster:

And the very, very American — note the corny-as-fuck narration and those distracting mag pullquotes — trailer for perhaps Egoyan’s best film, the extremely moving The Sweet Hereafter:

Posted by Media Funhouse at 6:30 PM