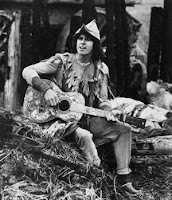 The endless, spiraling “rabbit hole” (thanks, Stephen) that is YouTube yields constant surprises. A lot of posters have put up feature films that have been out of print for years and never available on any home format, whereas others are sharing their favorite movies that have been around but are not findable at your video store or on Netflix (remember those hundreds of titles that were out on VHS that didn’t go to DVD?). As I noted last week, certain posters who do make their film uploads publicly searchable (read: they use the actual name of the film in their post) have divvied the films up by genre or star. Thus, the poster named IWaxx has dozens of movies up, with 990 clips in one account alone, but has taken care to sort them to different account names.

His or her simplest account is Reel Waxx. Here IWaxx has put up, among others, the original Andromeda Strain, To Catch a Thief, Suspicion, and the consummate American Expressionist classic Night of the Hunter.

At another account, this poster has put up family-friendly features, including the Shirley Temple Rebecca of Sunnybrook Farm, Darby O’Gill…, the Tom Thumb that features Peter Sellers, once-and-future kid-drama queen Hayley Mills in Pollyanna, Mr. Magoo’s Christmas Carol, and (this one’s anonymous) segments from My Two Dads.

IWaxx’s third account spotlights thrillers and fantasy films with some classic Harryhausens, Shadow of a Doubt, House on Haunted Hill, The Haunting, some Seventies horror pics, and the wonderful 1935 Midsummer Night’s Dream:

The WaxxFree account is the one under which this poster went completely over the top, posting a generous 990 clips. Included in this collection are a number of Cary Grant and Tyrone Power titles, as well as Dead End, Laura, Leave Her to Heaven, and the hard-to-find Jacques Demy film The Pied Piper starring Donovan as the titular troubadour. The film (which is actually up on YT from another poster!) is a stark retelling of the fairy tale with some surprisingly menacing moments, and a great cast that includes not only the almighty Lord of Trippiness himself, but also John Hurt and Pufnstuff star Jack Wild. The Pied Piper is not on DVD in the U.S., and I believe it was never out on VHS. But, thanks to IWaxx and his fellow “sharers,” we have this rarity and other classics available at the click of a button.

Posted by Media Funhouse at 1:43 PM