On the 'vulgarization' of Genet's 'The Maids'

Isabelle Huppert can do wrong. Well, she can appear (and has) in films that aren't quite up to her standard of quality from time to time, but even in those she has given nuanced, detailed performances, making the films at least worth checking out, if not remembering. The notion of her performing in a production of Genet's classic The Maids is thus kind of a dream come true: the perfect actress meets the perfect role (that of Solange, the elder sister).

But the production of the play created at the Sydney Theatre Company that is now being staged in NYC at City Center is an “updating” with a grand new physical presentation and dialogue that has been vulgarized (plenty of fucks and cunts can be heard in the dialogue) and updated to the 21st–century with pop culture references to match (among them, a namecheck of designer Alexander McQueen and a dumb-ass interpolation of “Hi-Ho” from the Disney Snow White).

The updates are felt right from the beginning, as “the Madame” (Cate Blanchett, actually the character Claire as the Madame) makes herself up, while her playful, childlike maid (Huppert as Solange assuming the role of Claire) does crazy exercise-ish dance moves on the bed while the Velvet Underground's “I'll Be Your Mirror” is pumped through the house loud speakers (see, the women are sisters and role-players – they're mirrors, see?). While it is a joy to see Blanchett glamorizing herself while Huppert, legs parted, does some very sexual calisthenics on the bed, the scene is a pointless addition that alerts the audience to the fact that this will be a very “light” production of the play.

But that isn't all we see – director Benedict Andrews and Sydney Theatre Company artistic director Andrew Upton's super-techno updating of the play (“Genet might be a great playwright, but a little mixed media can't hurt!”) means that a giant video screen is above the bedroom set. On the screen we see still-frame details of flowers, the Madame's dresses, shoes, and the like; we also see a different angle on the action (Blanchett's shoes, Huppert lying on the ground, the women looking into mirrors as they make themselves up) and actions that take place offstage.

Herein lies the most abrasive portion of this reviewer's experience seeing the play – I bought a ticket for a nosebleed seat in the back of the mezzanine specifically because it seemed to be well-located in relation to the stage and because the seat in question was not one labeled “obstructed view.” But it did have an obstructed view of the production as a whole – the kind and generous folks at the Lincoln Center Festival and City Center didn't bother to note when one bought a ticket that if you sat in the mezzanine, the video screen would be blocked by the underside of the upper balcony.

So I can report only on what appeared on the very bottom quadrant of the video screen, because my entire section was indeed one with an obstructed view. From what I could see of it, however, the technique was wildly unnecessary and simply intended to “soup up” the proceedings.

What I could see quite clearly was the video cameraman hidden behind the nearly transparent wall. This is an “effect” intended by our two Genet revisionists. What it succeeds in doing – and not in a good way – is distracting us from the actresses trying to breathe life into characters who have been denuded-beyond-denuding so we can watch a technician feverishly rolling a camera back and forth, doing his work all throughout the play. (Genet preferred his “layering” in the casting – wanting teenaged boys to play the maids – rather than in the staging and set design.)

So where one sits in City Center can make the production even more irritating (and the costly kind of irritating to boot). But onto the other changes made to the play by director Andrews – who is hailed in the press materials as “one of Australia's most regarded theatrical talents” (not highly regarded, just regarded), but who definitely seems to have a spiritual connection to his countryman Baz “let's update this storyline – our audience has no attention span!” Luhrmann.

Andrews stages The Maids primarily as a comedy. The tone given to the material, the delivery and pauses the actresses give to their lines, the constant rewrites of the lines (I'd swear I heard the phrase “old school” go by at one point), and the fact that so much of it was staged as farce, not drama, made certain that the audience could yuk it up.

Perhaps Andrews and Upton felt that the play needed a modern “tone” and that would be tongue-in-cheek. The manner in which the play is usually staged was reproduced in the American Film Theater's splendid 1974 film of the play starring Glenda Jackson and Susannah York.

That dramatic, heavily ceremonial tone is obviously something Andrews and Upton wished to “improve” upon, thus the farcical tone of his production – which then turns starkly dramatic every so often, when Andrews chose to return to the original text. The shift in tone dilutes the drama and seems to cast a pall over the audience, who, during the performance I saw, seemed disappointed by the dramatic moments and waiting with baited breath to laugh again. (It's the Baz Luhrmann Effect – keep things light and breezy!)

Lastly, there's the matter of casting. The 13 performances of the play are selling out in Manhattan because of the stellar duo in the lead roles. Blanchett is fresh off of winning an Oscar, and Huppert is arguably the best actress on the planet, so the two seem like a “dream team” in a well-known play with sexual/psychological/political overtones. (The last-mentioned aspect of the play is almost buried entirely in Andrews and Upton's vision, by the way.)

There is a definite oddness to the pairing, though, as Huppert is actually French and speaks heavily accented English (but pronounces the few French phrases and names that have been retained beautifully, as could be expected). Blanchett, for her part, starts out the play speaking in a British “posh” accent (when playing the Madame), and then returns to her own native Aussie accent (this being a production from Oz, after all) for the rest of the show.

Thus, playing two sisters who have presumably lived their whole life together in France, you have a real Frenchwoman and a lady from Oz. NYT critic Ben Brantley (who never met an encomium he didn't like) praised this casting, declaring that it “discounts any possibility of our accepting The Maids on easy naturalistic terms.” Good try, Ben (calm down, man!), but your mention of Huppert's accent being “unintelligible” means that the device is a failure. And it is.

To make the production even more odd, Andrews decided to vary the casting of the Madame away from the usual sort of actress who would play the role (an older aristocratic type, like Vivien Merchant in the 1974 AFT version). Instead he has cast Elizabeth Debicki (one of the stars of the Luhrmann “soup this up!” Great Gatsby), a sexy young actress who positively looms over Huppert (I couldn't tell if she's a foot taller, but she really dwarfs her fellow actress, even when barefoot).

So the Madame – who namechecks McQueen and is basically a fashion model who married well, instead of a pompous, condescending aristocrat – is a hot young number (the video feeds having shown us every line on Huppert and Blanchett's faces) who spends most of her time onstage in her lingerie and nothing more. In other productions, the sexual tension has been provided solely by the two actresses playing the maids, but in Andrews and Upton's rerowking, the Madame is also sexually charged, confusing matters entirely and, again, removing the overtly political aspect of Genet's original entirely. 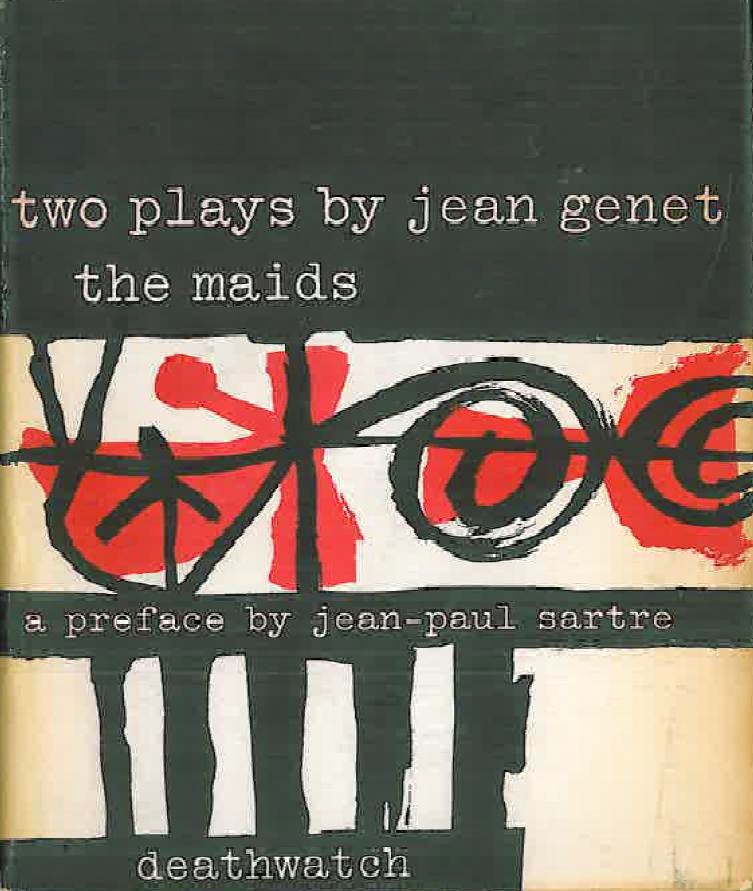 As I started out saying above, though, Huppert can do no wrong. At the end of the play, she is left alone onstage to do a final monologue in which she speaks directly to the audience and reflects on her position in life.

This final scene erases (nearly) the memories of all of Andrews and Upton's innovations and brings the play back down to earth, and to the playacting dimension that is central to the whole affair. No more childlike bouncing around, no more focus on fashion, no more distractions from the acting and the dialogue, just an actress incarnating a character who herself is used to playing a role in her daily life.

Blanchett does wonderful things with her role, and Huppert ultimately triumphs over all the silly innovations dreamed up by Andrews and Upton. It's a shame they're not in a better production of this classic play.
Posted by Media Funhouse at 12:42 AM