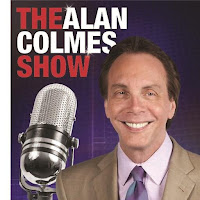 I'm pleased to say that this tribute to Alan Colmes will be a Hannity-free piece. Alan spent 13 years being Sean Hannity's partner (some would say “sidekick”), and I skillfully avoided ever seeing more than five minutes of the show. This obit for Alan is solely concerned with his talk-radio work, pre-Fox News (the cable TV network and the radio syndication outlet).

Listening to Alan's radio shows, one was aware of his debt to the East Coast pioneers of talk radio. He either verbally cited them as influences or, as was the case of Jean Shepherd, he interviewed them on-air. I first heard of Alan when he was doing a show on WPIX-FM, where he was known for a short time, for some incomprehensible reason, as “Alan Le Colm” (spelling is dubious, as was the whole nickname thing). When he arrived at WABC-AM for a morning drive-time slot, they dubbed him “Alan B. Colmes” – the middle initial fitting in with their call-letters but being another dippy work of fiction (his middle name was Samuel). WABC did a short obit tribute this past week to Alan in which they kept identifying him by this stupid moniker, which seemed moronic and disrespectful.


His specialty during his stint at WPIX was having various levels of kooks as guests, in an echo of Long John Nebel's radio show. This meant he could be heard talking to folk who interacted with aliens, various and sundry psychics, and the odd show-biz type.

Like all great radio personalities, the thing that made Alan special was his voice. He had a warm, comforting sound, and occupied an unusual place in the talk-radio spectrum, since he was openly liberal and proudly Jewish, as well as being okay with letting the “inmates run the asylum” by having segments on his shows that encouraged creative prank-calling. The best of these was “Radio Graffiti,” a segment where you were allowed “one sentence, one sentence only.” (An even better, longer version from the WEVD years can be found at the bottom of this webpage.)

As talk-radio became incredibly “specialized” on the AM band (read: simply conservative chatter, or all sports drivel all the time), Alan had fewer outlets to be heard on. This resulted in him being on a trio of stations that all shifted their format, meaning that he was on the last hours of all three (he was the very last voice heard on two of them; I can't verify this about the third).

The first was 66 WNBC-AM, where Alan took over for Joey Reynolds when he was “moved on” by management. Alan had Joey on as a guest during that time and it's pretty fascinating, since Joey was in transition and the callers are openly abusive to both Colmes and Reynolds (who keeps reminding them he doesn’t work at NBC anymore).


Alan polished his talk-show formula beautifully on NBC in the afternoon drive-time slot from 1987 to October '88 (the point at which I became a devoted listener). Alan hosted the very last show on the station before it made the switchover to “the FAN” (an all-sports format that gets amazing ratings and is toxic for folks like me).


From there Alan went to WMCA, the one-time home of the man who created talk radio as we know it, Barry Gray. Alan was on that station from '88-'89, when it, too, changed formats to all-Christian radio (more deadly than sports!). This is the best example of Alan's radio work on YT – an evening in which he pretended that he was giving up hosting his show and gave it over to the callers. What resulted was beautiful chaos, in which prank callers alternated with what sound to be prepared pranksters recruited by Alan ahead of time. Truly fun stuff.


In the late 1990s – around the time he began his TV stint with Hannity – he had a late night stint at WEVD. This station was a longtime left-wing station (named after Eugene V. Debs) that found Alan in good company politically. He also still devoted time to comedy – including two memorably serious interviews with Jean Shepherd and George Carlin.

WEVD went off the air in 2001, with Alan again being the very last voice heard on the station – wags on a certain radio-pro/fan message board deemed Alan “the Grim Reaper of Radio.” Alan got a lot of shit from a lot of parties for a few things he did, most notably his “partnership” with Sean Hannity. Now that he's left us, I'd like simply say that he was a great radio personality who gave me a lot of entertainment in the years that I listened to him. And my personal favorite partnership he had? It was with a caller, who was actually a professional performer that called in as different characters.

Alan had three regular callers, all of whom were played by this unnamed, unidentified comedian (there is *nothing* on the Internet to identify this guy). The last creation was “Mace,” a gravel-voiced alcoholic who called up Alan while he was fully lit and ready for destruction. The calmest of the three was “Steve,” a wimpy guy who had a bizarre obsession with Eddie Albert and was dying to host Alan's show.

The best comedy character, though, was “Elmo.” Alan's nemesis, Elmo called him to remind him that he wasn't funny, he conducted bad interviews, and generally made a lousy host. Alan would allow Elmo to dissect him at length – I remember him noting that Colmes “sucked all the humor out of comedians,” in reference to the Shepherd and Carlin interviews. It was a nice touch for a radio show – an antagonist who called in to say how badly the show was going.

Elmo also took the time to mock Alan's liberal politics. And when he did it, it was funny….
Posted by Media Funhouse at 12:48 AM