Mary Tyler Moore wanted to be known as a song and dance woman. Never mind that she was hailed by both the public and her colleagues as a great comic actress, a talented dramatic actress, and a producer of successful TV series in a number of genres. She wanted her music skills to be recognized — the only problem was that she made some *very* bad choices.

First, there was the Breakfast at Tiffany’s musical called Holly Golighty in December 1966; it ran on Broadway for only three days. The year after that, she costarred with Julie Andrews in Thoroughly Modern Millie, one of countless late Sixties/early Seventies musicals that helped kill off the genre. It’s a charming picture in its own way, but it didn’t click with the public and did nothing for any of its stars.

Then she was in a musical where she watched someone else sing. It’s something every camp fan in good standing must see, the startling A Change of Habit (1969). MTM plays a nun helping “inner city youth” and Elvis plays a ghetto doctor (yes, you read that right). 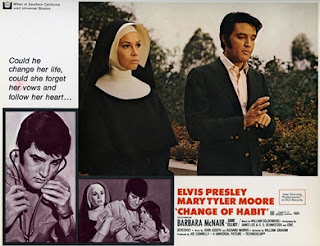 It’s a stunningly, wonderfully awful movie that is the only time “the King” is seen in one of his vehicle pictures confronting the significant issues of the day. Poverty, race relations, Vietnam, the rebellion of youth — they’re all tackled in Habit in a bizarrely silly fashion.

The film’s conclusion is a startling moment in which MTM the nun watches ghetto doctor Elvis singing at a “folk mass” and ponders her fate. We see her POV as she thinks about whom she should choose (via a number of clunkily edited shots, some including awkward, Fulci-like zooms), will it be Jesus or Elvis, JesusorElvis, jesusorelvis? A smooth crane shot (Johnny LaRue would be impressed) moves us high up above the pews in the church, and the credits start to roll. End of film.

A friend, who adored Elvis way, way too much, perfectly explained the film’s conclusion to me once, saying that no matter whom Mary chose she was choosing God. “Elvis *is* Jesus. Jesus *is* Elvis. She’s choosing God either way.”


That bit of theological deduction aside, the movie stiffed. The year after, she swung a deal for The Mary Tyler Moore Show. I won’t discuss that perfect sitcom here, because it has been spoken about quite a lot in the weeks since Mary’s death. What has not been discussed, however, is her 1976 return to musical comedy, the mind-bendingly strange TV special “Mary’s Incredible Dream.” When you watch it, you’ll understand why it’s been left out.

I’ve often talked on the Funhouse TV show about the schizo nature of later Sixties/early Seventies  variety shows. They presented a very odd mixture of the old and new. By the Seventies, the genre was dying out so it split in two directions — the shows hosted by “hip” pop acts (led by Sonny and Cher) that were anything but hip, and the old “songs and sketches with repeated characters“ model (represented by very late Gleason — woof! — and Carol Burnett).

A third type of show was rarer, but far more sublimely awful — the “concept” variety show or special. The best-remembered of these are the “Star Wars Xmas Special” and the Krofft-produced variety shows that were set in odd circumstances (Donny and Marie near an ice rink, the Brady Bunch near a swimming pool). 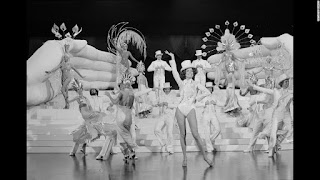 “Mary’s Incredible Dream” is a stunning example of the concept variety special. Most important to remember is that MTM chose to produce and star in it while The Mary Tyler Moore Show was still getting great ratings and regularly winning Emmys. The show is a sort of distant cousin to the religious rock operas of the Seventies — it’s closer in tone to the ultra-goofy Godspell, rather than the earnest but instantly dated Jesus Christ Superstar. Why Mary wanted to make a musical special translating Old Testament stories into tacky “modern” musical numbers we’ll probably never know, but therein lies the joy.

The show was directed by Sonny and Cher Comedy Hour collaborators Eugene McAvoy and Jaime Rogers. The script was written by Jack Good (producer of Shindig), McAvoy and Rogers’ partner in creating the amazing — and in this case I mean that seriously — concept variety show “33 1/3 Revolutions Per Monkee” (1969). That show exhibits a greater “handle” on rock music — especially in the sequences featuring Julie Driscoll and Brian Auger, and a Fifties rock 'n' roll segment that features Fats Domino, Little Richard, and Jerry Lee Lewis — and was intended to showcase the “implosion” of a musical act.

The guest list of the “Dream” special is a classic variety show roster, minus any comedians — that would’ve taken the special into the area of intentional comedy and we certainly wouldn’t want that. Ben Vereen in his bearded, Bob Fosse-directed, Seventies rockin’ soul incarnation, is the main guest; Cajun fiddler Doug Kershaw is also featured. Completing the roster is the Manhattan Transfer and Arthur Fiedler conducting not the Boston Pops, but the Hollywood Bowl Orchestra.


The show’s frame device is that Mary is dreaming this musical mess. The best place to start adapting the Bible is the beginning, so we start out with Vereen as a flashy-trash Satan tempting “Woman” (MTM) and “Man” (Doug Kershaw) in the Garden of Eden, as the Manhattan Transfer sing “Don’t Sit Under the Apple Tree” (get it — it’s a joke! Apple tree, Garden of Eden…). 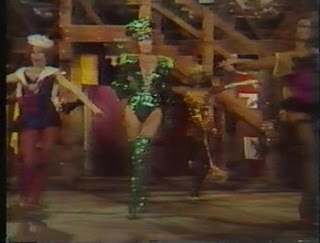 The show is embedded below, so I won’t run through the “plot” or the blissfully dippy selection of songs. The most interesting choice in the early scenes, in which man is surrendering to the impulse of war, is a World War I recruiting song that is “sexy” for its time (1914), “I’ll Make a Man of You.” Clearly, this was a nod to Cabaret, as Mary is seducing soldiers into war with her sexy outfit and her not-that-sexy way with the number.

The “war” section of the special closes with the dropping of the atom bomb, after which the Transfer sing “Sh-Boom” (get it? a bomb dropped — boom? It’s another musical pun!). This song is accompanied by a fast-action montage of Henry Kissinger meeting world leaders. (President Ford is briefly shown, but clearly Jack Good felt Kissinger went better with the Transfer’s song….) 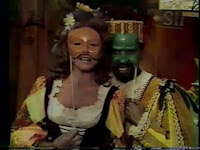 The special has very little dialogue and mostly functions as a pop-rock operetta. It fully breaks on through to the bizarro universe when Mary and Doug survive being on Noah’s Ark and Mary sings Cat Stevens’ “Morning Has Broken.” From that point on the show gets odder and odder, as Mary does the full version of Sondheim’s “I’m Still Here” from Follies (why Herbert and J. Edgar Hoover are being mentioned in an Old Testament context is inexplicable), Ben Vereen does a rockin’ “Ball of Confusion,” and one of the male members of the Manhattan Transfer does “Sympathy for the Devil.” (Thereby answering the trivia question, “when did Mary Tyler Moore produce and star in a show that has an insane musical number conceived around a Rolling Stones song?”)

The show ends on a triumphant note that you will discover if you watch it. And then Jack Good throws in a bit of closure, bringing back the frame device for the final time. I do remember my best friend noting in the Seventies that he had seen this puzzling bit of programming, but I missed it at the time. We can be very grateful to the YT poster for having “made it public” for all to see.

The only (partial) musical endeavor that Mary was involved with after this special (trivia-fiends, correct me if I’m wrong) was her short-lived variety series, best known for having an ensemble that included newcomers (David Letterman, Swoosie Kurtz, Michael Keaton) and one seasoned vet (Dick Shawn). This, too, was a disaster, and the remainder of Mary’s career was split between acting and producing. There was no second “Incredible Dream.”

The beginning of the show is here:

And the point at which the show gets insane:

It’s enlightening to know that Mary really loved the special before it aired. Blogger Jaime J. Weinman notes here that Mary was quoted by columnist Marilyn Beck as saying "As a performer I can go to my grave happy now. I've done everything I want to do."

Beck added, “Mary's so convinced the special is the best thing ever to hit the airwaves she's been talking it up to anyone who will listen. And has been cornering so many of her friends for preview cassette-unit glimpses of the all-musical hour that actress Betty White finally told her teasingly, 'It's a shame you don't put it on TV, instead of showing it door to door.' "

Thanks to Stephen K. for sending this disaster on — as well as Mary singing Loudon Wainwright’s “Dead Skunk” on her failed variety show!
Posted by Media Funhouse at 9:27 PM