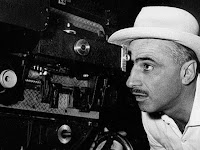 There’s been a dearth of foreign film distribution over here since the Reagan era (that is pretty much when the country closed in on itself), and this comes to the fore when you consider a career like Mario Monicelli’s. This legend of Italian movie comedy made almost 70 features and kept right on making them until 2006 (when he was 91), but we barely saw a solid dozen of his pictures throughout the years, and were certainly not gonna see ’em after the xenophobic Eighties kicked in.

Monicelli died on November 29th of this year when he leaped from the fifth-story window of a hospital where he was being treated for prostate cancer. He was 95 years old and, according to one obit I read, chose the method of suicide used by his father (that still needs verification, as Wikipedia likes to put it).

He began steadily directing features at the turn of the 1950s, and scored his first hits with the great Italian comedian Totò. Totò also starred in his best-remembered and most well-distributed comedy, the ultimate “gang that couldn’t shoot straight” caper film I Soliti Ignoti (1958), which translates as “The unknown thieves” (reportedly titled after the “usual suspects” line in Casablanca).

The film was better known over here as Big Deal on Madonna Street, and remains one of the greatest Italian comedy movies ever. Not a single scene can be found with English subs on YouTube (presumably because it is now out on Criterion — although at one time “public domain” videos of it were available over here), but I think this clip showing the would-be crooks figuring out how to bust through a wall is indicative of the film’s wonderful humor. Among the many leads were Vittorio Gassman and a young Marcello Mastroianni:

Monicelli was hailed critcally and popularly for the comedy The Great War (1959) with Gassman and Alberto Sordi, and the drama The Organizer (1963) (both unseeable in the U.S. these days). He also had an entry in the anthology film Boccaccio ’70 (1962), which featured short films by De Sica, Fellini, and Visconti. There is an English-language trailer (very Sixties, of course) on YouTube for this film, but I won’t link to it, as it was the Joseph E. Levine-trimmed version of the film that was missing the Monicelli segment (his short didn’t feature a “name” actress, so Levine decided to keep the segments that featured Loren, Romy Schneider, and Fellini’s uber-fetishy "Amazing Colossal" version of Anita Ekberg). Here is the Italian trailer that includes Monicelli’s segment:

If you’re getting the impression that we didn’t get to see a lot of Monicelli’s work, well, you’re right; currently only Big Deal is available on DVD in the U.S. Thus, we won’t be seeing what was hailed as one of his best films, My Friends (1975) with Tognazzi and Noiret, anytime soon, but we can at least troll YouTube for wonderful moments like this bit from Monicelli’s Casanova 70 (1965) with the one and only Marcello cuckolding none other than Funhouse fave Marco Ferreri. There are no subs on this scene, but you don’t need ’em. When a horny wife strays from the marital bed for a late-night tango with Marcello, what else do you really need to know?

I will close out by saying that I saw one of Monicelli’s meagerest comedies late one night on local Ch. 5 back in the Eighties. Shot mostly in English, La mortadella (1970), renamed Lady Liberty, is a dippy comedy that finds Sophia Loren not being allowed into the U.S. because she insists that she must carry an Italian sausage (the titular mortadella) into the country (don't ask). Along the way, as she is held in detention by immigration officials, she meets characters played by William Devane, David Doyle, a much younger Danny DeVito, and the gorgeous straight-outta-Joe Susan Sarandon. I don’t have the clearest memories of the film, except that it belabors its premise and it ain’t funny.

Monicelli appeared in a minor role as an actor in the Diane Lane film Under the Tuscan Sun (2003). Given the depressing circumstances of his death, I’ll refer you to the rousing quote utilized in his Variety obit, on the subject of the future of film: "Cinema will never die, it was born and cannot die. The cinema hall will die perhaps, but I definitely don't care [about] this."
Posted by Media Funhouse at 11:35 PM