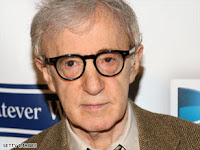 I regularly do Deceased Artiste tributes on this blog, but I also want to occasionally salute those artists and entertainers whose work I love who are still alive. In this spirit, I say happy 75th and 80th birthdays (respectively) to two great filmmakers, whose work has been important to me personally over the years.

The first is Woody Allen, who turned 75 last week. The party line on Woody is that he’s a great comedian and filmmaker who hit his stride with Annie Hall and Manhattan, and that his latter-day films aren’t “entertaining.” I would defend him based on several levels of fan and critical appreciation. First and foremost, what Woody has carried off in the past thirty years since those twin masterworks is nothing short of miraculous, especially as an American filmmaker, since, as we know, over here you’re only as good as your last picture’s box office. He has displayed a dogged determination similar to that of one of my utter filmmaking heroes, Robert Altman, who never stopped making fascinating work even when he was totally “disinvited” from filmmaking here in his home country.

Woody has maintained a steady output of features since the turn of the Eighties and, yes, a few of them were wildly underwhelming (if I had to vote, I’d say Hollywood Ending was the lowest ebb by far), but others have been resonant works that have shown him growing and transforming as an artist.

Woody's work is indeed a sort of "doorway" to arthouse fare: I grew up watching his films, seeing his absolutely perfect comedies as a child (the sex and death references I didn’t get, but what did that matter?). I came of age as he was making his most trendsetting pictures, and then saw every single one of the Mia Farrow-era pictures in theaters. For every two or three ambitious but bloodless missteps (September, Another Woman, Shadows and Fog) during that period, there was a film that was absolutely wonderful (the superb Hannah and Her Sisters, Radio Days, and the very underrated Husbands and Wives).

What is most important for me about his work on a personal level, though, is its quotability — not just in terms of the one-liners from his three terrific standup comedy LPs or his first few wildly funny movie comedies, but his humorous (yet pretty damned wistful) reflections on relationships. "We need the eggs..." indeed. All I can say is that work like that is never going to date.

The other party line about Allen is that he is “much more popular in Europe,” which is a major put-down in America, as it equates him with Jerry Lewis — a comedian he’s said very nice things about, but whom he’s worlds away from in terms of filmmaking. The fact that he has turned to producers in other countries to fund his films has once again shown that, no matter what they say at the Oscars, artistry really isn’t appreciated too much around Hollywood (and particularly not when the filmmaker has kept to the East Coast and not cast Leonard DiCaprio in a series of wildly commercial projects — Woody did use him in Celebrity but didn’t feel as compelled as Scorsese has to keep using him as star-bait to make exceedingly un-personal features).

The ties to Europe have also reinforced Woody’s devotion to the arthouse cinema of the Fifties, in particular Bergman and Fellini. It has often been noted that Woody’s visual style is inconsistent, largely the result of whichever cinematographer he’s working with at the time — this is indeed true, but as a screenwriter and director of actors he has proven himself to be a true auteur returning to the same themes over and over again, even as he moves from country to country to get his small-in-scope character pieces made. In recent years I’ve felt that a strong comparison can be made between his more serious works and the films of Eric Rohmer, although he is never cited as an influence by Woody.

When Bergman died, I remember that Woody was asked by an interviewer if he felt that he himself had influenced any contemporary filmmakers. He stated outright that he hadn’t, but I think he was thinking only about drama and forgetting (or perhaps wanting to forget) that his best films have become the models for most contemporary urban neurotic comedies and love stories in the movies and particularly on television. When he used Larry David as a lead in Whatever Works (2009), he was closing a circle, as Seinfeld and Curb Your Enthusiasm owe a massive debt to this work. On the other hand, Woody’s best work also has inspired Nora Ephron’s thoroughly meager imitations — but don’t blame him for that.

Just a few clips to honor the man. I continually find odd TV appearances he made in the Sixties cropping up on YT (as with his boxing a kangaroo), so I was interested to see yet another Tonight Show appearance posted by the gent who put up an entire 1971 episode hosted by Woody:

It’s hard to say what are the “funniest films of all time,” but one of Woody’s funniest (and smartest) comedies was Love and Death (1975):

Feeling down around the holidays? This scene from Hannah and Her Sisters (1986) reminds me what is important, and that the Marx Bros. can stop ya from throwing in the towel:

A left-field move that was very underrated, Sweet and Lowdown (1999):

Another reinvention that was very much welcome. Woody tackled the class-conscious British drama with a really attractive looking set of younger leads in Match Point (2005):

And finally, his most recent return to this city, which he still has the capacity to seem magical. Owing something to his life-affirming speech in Hannah… is the finale of Whatever Works (2009):

Posted by Media Funhouse at 3:35 PM