The radiant past returns, for an hour every night

The Yuletide season weighs heavily upon us all — if depression didn’t exist, the holidays could singlehandedly create it. One cable network, however — which I had condemned last year for dropping their library of wonderfully entertaining b&w shows into oblivion — has decided to give nostalgia buffs a little present for Xmas/Hanukkah/Kwanzaa/whatever you choose to celebrate.

As of this past Monday, GSN has decided to throw those who’d like some representation of vintage TV a bone by restoring the channel’s “b&w hour” from 3 to 4:00 a.m. (midnight–1:00 a.m. West Coast). They’ve started out with the most entertaining (and awesomely guest-filled) shows, What’s My Line and I’ve Got a Secret. The former was the most silly-yet-sophisticated game show ever, and the latter was the most wittily pointless — the game never mattered, and if we thought it did, the gold-standard curmudgeon, radio humorist Henry Morgan, reminded us that it didn’t. 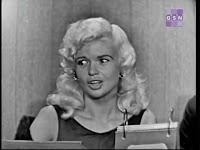 IGAS has been resumed in 1960, when its longstanding panel (Cullen, Myerson, Morgan, Palmer) was firmly in place. WML has been joined in the mid-’50s, when the sour-faced comedy god Fred Allen was on the panel (“new” sensation Jayne Mansfield was the Mystery Guest last eve, if that makes it easier to situate the period).

I still like to promote the notion that if the folks running TCM would like to bless us with a classic TV channel, there’d be brilliant b&w comedy, drama, and genre weirdness being seen again for the first time in decades, making the cable "choice" truly that — a choice. No more having to surf past mounds of awful sports programming, rancid, recent-vintage TV movies, and mind-destroying “reality TV.”

UPDATE: The eagle-eyed souls on the GSN message boards have noted that this is indeed a two-week “Xmas present” from the folks who run the network and want to push their most recent anodyne crap product and acquired garbage (every known iteration of Family Feud! The 2000-era game shows that no one wants to rewatch! The Newlywed Game retread with Carnie Wilson!). Enjoy while you can — classic, classy TV is about to be buried again….
Posted by Media Funhouse at 6:00 PM