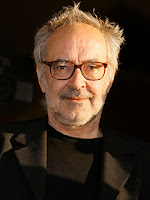 As my second birthday honoree, I want to salute once more Funhouse deity Jean-Luc Godard, aka “Uncle Jean” (from his indelibly eccentric character in the perfect First Name: Carmen). He turned 80 years old on December 3rd and, thankfully for us, is still crafting provocative, brilliant, and gorgeously poetic films.

There are entire bookshelves’ worth of Godard studies out there, but nothing compares to just watching the films themselves. The most common entry point is, of course, his groundbreaking first feature A bout de souffle, which turned 50 this year, thus earning him an honorary Oscar that the Oscar folks don’t deem worthy of inclusion in the telecast for more than a few seconds. I would argue that any of the “classic 15” — his fifteen narrative features from 1960-68 — serve as a great introduction to his style, as do the first three “comeback” films of the early Eighties (Sauve qui peut, Passion, and First Name Carmen).

Godard’s recent films have shown he has lost none of his uncanny grasp of the medium, his perceptive view of the ways in which men and women communicate (and quite often fail to communicate), and his ability to beautifully articulate how the cinema entices/deceives the viewer. 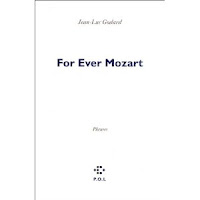 What is impressive about Godard’s work from the last 30 years is its blend of conceptual thinking, intelligent dialogue, and absolutely beautiful imagery. The result is, and I’m not using this term as mere hype, filmic poetry. This was illustrated by the fact that when he made his scripts available to the French publisher P.O.L., they were published as books of poetry — no parenthetical notes, no set-ups, no identification of the characters speaking. Since Godard sometimes quotes numerous authors and filmmakers in his dialogue, there is always a list of sources in the back of every book.

It’s extremely rare that a filmmaker’s work can be so essentially cinematic and yet also function as literature. It also works musically, which is why the music label ECM has released CDs of the complete soundtracks to certain of his features and the epic video masterwork Histoire(s) du Cinema. There is a beautiful article contained in the booklet of the Nouvelle Vague CD set that finds a blind writer offering her experience of Godard's dense sound mix in the film.

As a measure of Godard’s cross-cultural fame and his fans' justified devotion, I refer you to these folks, who decided to create a new JLG font to celebrate Godard’s 80th birthday. (Thanks to RC for passing this on.) Here is the lowdown on it.

Now that I’ve made the case that the man is a fucking artistic genius, let us wallow in his most “accessible” moments, those involving music. Basically any of the Godard-cut trailers for any of the “golden 15” films functions like a music-vid. All of these trailers are on YT, so they merely need to be searched out by title. Here is my personal fave of longstanding, from 1966:

His “comeback” film Sauve Qui Peut (la vie) (aka Every Man for Himself, 1980) recently was re-released in America and will hopefully be out on DVD sometime soon. It has some fascinating moments in which Godard uses electronic music:

A unforgettable mixture of image and sound, as Tom Waits’ “Ruby’s Arms” is used to underscore a scene of impotence in Prenom Carmen (1983):

One of my all-time fave bands, the French duo Les Rita Mitsouko, were studied in Soigne Ta Droite (aka, Keep Up Your Right, 1987). I put this up on YT when Les Rita mastermind Fred Chichin died:

One of Godard’s 21st–century triumphs is the film Eloge de l’amour (aka In Praise of Love, 2001). Here, a gorgeous b&w scene is underscored by a song from Vigo’s timeless L’Atalante:

In closing I offer you the union of our two birthday-salute recipients: Woody Allen as directed by Godard in the wildly uneven King Lear (1987):

And the only onscreen meeting of both filmmakers, in the Godard interview video Meetin’ WA (1986), where a very reserved Uncle Jean meets a very reserved Woody. There are no English subs for Godard’s narration here, but you do have the actual interview between the two in English. This is must-see for anyone who likes either filmmaker (or both):

Posted by Media Funhouse at 5:16 PM