The Return of the Son of the Trail of the Curse…: Deceased Artiste Blake Edwards 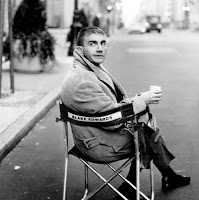 Blake Edwards, who was often hailed as the “next Billy Wilder” (but never really was), died on Wednesday at 88, causing film fans to reminisce fondly about his best films and try to forget about the many (many) bad ones that followed.

Edwards’ career was a study in indulgence, and indulgent moviemaking can be a superb thing (Fellini) or a very painful one (Vincent Gallo). When Edwards received his honorary Oscar — back when they showed the Lifetime Achievement awards on the program! — he thanked his wife Julie Andrews and omitted two of the people without whom his legacy would’ve been a hell of a lot poorer, Audrey Hepburn and Peter Sellers.

Ther are several rock-solid comedies and drama in Edwards’ filmography, but Breakfast at Tiffany’s (1961) was a seminal work that added much to the “dream” aspect of NYC (“…she’s a phony, but she’s a genuine phony…”). Hepburn became a style icon more for that film than any other, despite its awful interludes (Mickey Rooney as a cartoon Japanese character that makes Jerry Lewis’s Asians seem politically correct).

Interestingly, my favorite snatch of dialogue from an Edwards film comes from Tiffany’s but was not scripted by Edwards — instead it came either from the original Capote novella or the marvelous Sixties filmmaker George Axelrod, who scripted the film. It comes when John McGiver finds out that there are still prizes in Cracker Jack boxes and says, “That's nice to know. It gives one a feeling of solidarity, almost of continuity with the past, that sort of thing.” I think about “continuity with the past” quite a lot (as regular readers of this blog already know).

And Sellers! A comic actor of boundless energy, he did what he had to do (silly French accent and pratfalls) in The Pink Panther (1963) and stole what was otherwise a pretty mediocre jewel-thief comedy. The follow-up, A Shot in the Dark (1964), was much better, but the later entry The Pink Panther Strikes Again (1976) was probably the most enjoyable pic in the series.

But Sellers’ death didn’t stop the series (and thanks, Steve Martin, for wasting our time sullying Sellers’ legacy, twice, once you’d finished burying in the dirt Phil Silver’s finest comic creation). Edwards went on to create a trio of horrible Pink Panther films without Sellers. Trail of the Pink Panther (1982) is a godawful “search” for Inspector Clouseau that is simply an excuse to show Sellers outtakes. (I remember Edwards’ excuse for the film being that Sellers had once said to him that the public should see the outtakes from the three preceding films — but he never mentioned framing them with a plot!) Curse of the Pink Panther (1983) was an attempt to create another Inspector Clouseau, this time an NYPD detective played by Ted Wass. And Edwards’ very last theatrical feature, Son of the Pink Panther (1993), was an unbelievably bad English-language vehicle for the otherwise wonderful Roberto Benigni.

Yes, there were a lot of very bad Blake Edwards movies. Remember when he decided to remake Laurel and Hardy’s Music Box with Ted Danson and Howie Mandel (A Fine Mess)? (This after trying to top the longest pie fighter ever, from a silent L&H comedy, with a much, much bigger one in his cute and well-cast but endless The Great Race.) Or when he made a cheesy sitcom-like farce with randy jokes, including one featuring a glow-in-the-dark condom (Skin Deep)? Or when he remade Goodbye Charlie for no perceptible reason (Switch)?

Rather than dwell on how many of the later Edwards films were outright embarrassments (basically anything after Victoria/Victoria, 1982), let’s remember his true talent with one of my favorites of his pictures, and surely his most acidic outing, the attack on major-studio Hollywood he called S.O.B. (1981). In that film, he finally got to show his prim and proper wife’s raunchy side, got to resurrect a famous Hollywood urban legend about John Barrymore and his poker buddies, and got to have his movie stolen by veteran comic wildman Larry Storch, as a goofy guru.

If there’s one moment that Edwards did seem like Billy Wilder — albeit the latter-day curse-happy Wilder of the Seventies — it was in S.O.B.:

Posted by Media Funhouse at 1:46 PM

Edwards's Wild Rovers is one of my favourite movies: a gritty, tender western with perfect performances from William Holden, Ryan O'Neal, Joe Don Baker Karl Malden and everyone else. It's like a darker Thunderbolt and Lightfoot, with a beautiful attention to detail: the bumpiness of the road the wagon goes along near the beginning, and the naturalism of the performances - O'Neal's character holding his face blank to avoid showing emotion when a cowboy is killed by a mule.
I like the randomness of the violence, and the fanaticism of Baker's character, and the sense of grim hard work in the cowboy life. The scenery is beautiful without being pretty or lingered-over, and the movie is less stylized than Peckinpah often was, and can stand alongside Ride the High Country and is - I think - superior to The Wild Bunch and Pat Garrett and Billy the Kid - certainly the acting is subtler than in the former. It's sentimental at times, as far as I remember, but it has a sense of reality that's rare in movies, even back in the 70s.
http://www.tcm.com/mediaroom/index.jsp?cid=34641

Actually, there are some clips on YouTube, and here's the patient. confident beginning, showing the ctcle of the working day - (and earlier, by "mule" I meant "cow pony".)