Many times celebrities don’t “die in threes,” and often the folks in question have very different levels of celebrity. Leslie Nielsen had a long, productive career, in fact two careers as both a stoic leading man and then as a parody of that same stoic leading man character. Many TV and online commentators have done wonderful tributes to him already, so I will move past him to the uneven director Irvin Kershner, best known for The Empire Strikes Back.

Kershner’s career was filled with a lot of mediocre movies — although I’m still looking forward to catching up sometime soon to The Luck of Ginger Coffey (1964) and Loving (1970) (as I’m a sucker for anything made by the confused, depressed Hollywood of the early Seventies). One of the Kershners that is a lot of fun, and yet is pretty damned uneven, is A Fine Madness (1966), starring the one and only Sean Connery during his Bond-ian heyday:

Yes, Empire Strikes Back demonstrated Kershner’s grasp of Hollywood genre corniness. Another great, compulsively watchable example of this (more watchable for me than Empire — heresy!) is The Eyes of Laura Mars (1978). Here’s the first photo shoot sequence, framed to look like a Helmut Newton version of a fashion-model catfight:

And if that didn’t absolutely reek of the Seventies for ya, try on this unBELIEVEably campy bit of disco-bad filmmaking. Oh, the poses, the costumes, the lyrics, it’s just too perfectly fuckin’ awful.

Now let me turn to two other Deceased Artistes who would seem on first glance to have absolutely nothing in common, but in researching them I discovered that both were Polish immigrants, one to England, the other to America. The first was Ingoushka Petrov, better known as Ingrid Pitt or, more properly, “Countess Dracula” from the Hammer pic of the same name. 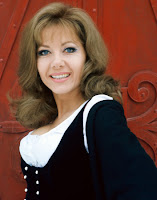 Pitt was born in 1937 to a German father and a Polish mother, and survived the concentration camps where, she later testified, she saw things that were much scarier than any horror flick she ever acted in. Her New York Times obit had a rather amazing and highly doubtful story about her appearing in Mother Courage in East Germany where she lived after the war. She evidently (yeah, right) fled the state police while wearing her "Mother Courage" costume, and jumped in the River Spree — only to be saved by an American serviceman whom she later married!

Now back to what really occurred in her life: she was indeed in an East German theater company, run by Brecht’s second wife, and did marry an American serviceman. In the Sixties she became a bit actress in the movies, and wound up making her reputation in two Hammer productions, The Vampire Lovers (1970) and Countess Dracula (1971). Both films were wonderfully stylish vampire-chick movies that proved that Hammer didn’t need Christopher Lee to make a successful horror picture:

Vampire Lovers can be seen in its entirety (I think — you know YouTube is American, so it ain’t gonna tolerate the undraped female form, it might stunt the kiddies) here. The two gents who have put up the Countress Dracula trailer have made it unembeddable (presumably to keep it up on YT longer), but you can just click the link supplied right here in the title.

Pitt was also in the wonderfully creepy House That Dripped Blood (1971) (which scared the shit out of me as a kid), and later had supporting roles on Doctor Who and in Smiley’s People, but she will forever be remembered as an extremely sexy vampire. 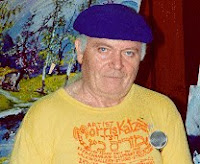 Far less sexy, and also far less well known, but beloved to New Yorkers who watched a lotta Joe Franklin back in the Eighties and early Nineties, was Morris Katz. He, too, was born in Poland, in his case in 1932. Katz was “the greatest painter in the world” by his own estimation, but certainly did have the distinction of being one of the fastest painters. (He never made it into the Guiness Book, but he did appear supposedly in Ripley’s Believe It Or Not!).

He called what he did “instant art,” and it is noted that the fastest he ever produced a painting was in 30 seconds. Now, mind you, these were not masterworks, but what I always found amusing about his work was his use of toilet paper to blot the image and put leaves on trees, heads on people in crowds, to generally add to the overall composition by using a little impressionist trick (although I don’t think Renoir and Monet used toilet paper to achieve the effect).

In any case, the finest thing he did besides the toilet paper business was that after he finished a fast-as-hell painting he actually assembled a frame with a staple gun! This man was nothing if not complete — he may not have been Picasso, but you had to go and get Picasso’s works framed, whereas Morris stapled you together a beaut.

I was surprised to find that none of Katz’s many, many, many local and national talk show appearances is on YouTube, and none of the many episodes of the show he did for Manhattan access for years and years. What we are left with are tiny slivers of footage which I offer you now. Morris painting at Kutshers:

Okay, so Morris wasn’t as sexy or as intriguing onscreen as Ingrid Pitt. But, again, could she finish a full oil painting in under five minutes and also slap a frame on the sucker as well?
Posted by Media Funhouse at 11:42 PM

I love those bleak 70s movies, too - Scarecrow comes to mind - and after Connery became a national treasure in the UK in the late 1980s I went off him,only for A Fine Madness to make me respect him again: I'd remembered it as some small movie from before he was a star, but it's actually between Bonds, and, sure, he's trashing his 007 image to upset the producers, but it's also a reminder that actors used to think they had a responsibility to stretch themselves as artists.

There's a nice UK interview with Ingrid Pitt where she says Burton and Eastwood had a bet about who would sleep with her first. When she's coy about who won, the normally unfunny interviewer asks, "It wasn't a draw, was it?"

Oh, and Eyes of Laura Mars was the first Tommy Lee Jones performance I saw - Jones, like John C. McGinley, is an always- compelling actor I'll watch in anything (including the Charlie's Angels pilot).