Have Yourself an Atheist Xmas: "Nerdstock"

The Yuletide resounds with weighty, sometimes oppressive sentiments, so it is important to just settle back and have a good time. I can think of no better way to do this than to view the British TV special called “Nerdstock”.

The show, which is properly known as “Nine Lessons and Carols for Godless People,” has taken place annually for the last three years in London. This week on the Funhouse TV show, I’ll be featuring a review of, and show short clips from, the DVD record of the first “Godless” event in 2008 (from the indie label Go Faster Stripe). Comedian Robin Ince hosts and organizes the program, taking care to balance the bill among standup comics, musicians and scientists. The intention is to create a “rationalist” celebration of the season that drops the supernatural religious aspect of the holiday in favor of a calm, optimistic view of this planet and those bright lights around us. And yes, the comedians are free to be downright sacrilegious — what fun would a rationalist holiday be without that?

Comparing the reviews that exist online of the live events, the Go Faster Stripe DVD, and the “Nerdstock” broadcast, it becomes evident that the last-mentioned was abridged and sorta carefully edited for telecast, and is thus missing some of the more lacerating (read: seriously atheist) comedians including Funhouse fave Stewart Lee (his former partner Richard Herring does a very sharp routine on the 2008 DVD, but is noticeably friendlier and fuzzier on the 2009 telecast), and one cult figure who appeared at the event (comics genius Alan Moore). Also not on TV special is Ricky Gervais, noted atheist celeb, who has done a number of these Godless gigs, since he is a friend of Ince’s (Ince served his opening act as his standup career began to skyrocket). 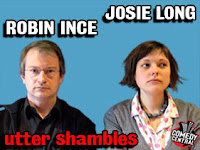 In any case, the show is well worth your time, because I can’t imagine it for a single second being aired in America, where we theoretically have “separation of church and state” — except in the minds of Xtian fundamentalists. Please do partake of ”Nerdstock”, and if you’re interested in the further adventures of host/producer Ince, check out his inteview podcast, cohosted by comedian Josie Long, called “Utter Shambles.” Ince and Long interview a mix of comedians and the occasional scientifically minded individual. Their guest list so far has included “alternative” comedy god Alexei Sayle, Stewart Lee, Mark Steel, podcast duo Richard Herring and Andrew Collins, and the one and only mystery man of Northampton, Alan Moore. Listen here. And here again is the "Godless" "Nerdstock" special: