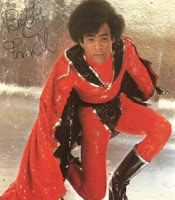 I liked the work of recent shufflers-off-this-mortal-coil Gerry Rafferty and Anne Baxter, but they’ve been well covered elsewhere. I’d like to focus instead on Bobby Farrell, who was a star in popular music, but never actually made the music himself. He was described variously in his obits as “lead performer,” “lead dancer,” and “lip-synch artist” in the group Boney M. It was the last credit that made me research Farrell’s life, and I found a wealth of wonderfully kitschy Eurodisco that never really seemed to have caught on over here, as far as the mainstream (I’m sure it was played at many discos in the States by DJs aware of “continental trends”).

Farrell, who died at 61 on December 30th, was an Arruban who traveled to Norway and the Netherlands before he hit Germany and encountered wonderfully mad record producer Frank Farian, who had started to make Boney M. records himself in late ’74, with his own voice put through a filter. He needed to find a face (and dance moves) to go with his voice, so he had Farrell tour as the “lead singer” of the group, with two ladies who were also stylish lip-synchers and a fourth performer, Liz Mitchell, who had actually provided female vocals on some of the Boney M. releases. 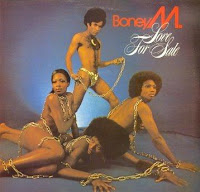 There are two wonderful things one discovers when one researches Boney M.: first the trove of catchy-as-fuck and absolutely ridiculous disco tunes Farian came up with for the group, and secondly, the 1990 court case that allowed each member of the touring Boney M. to start his or her own version of the group! Now that is some subdivision of a prefab non-existent enterprise: allow the public faces of the concept to create their own stage versions of it, resulting in a lot of competing Boney M. touring acts, which kept the name alive in Europe right through to the present. Boney M. ran its course hit-wise in the early Eighties, but Farian later came up with several other prominent studio creations, including (you guessed it) Milli Vanilli.

The most interesting thing about Farrell’s death was that he died in St. Petersburg, Russia, where there was still evidently a strong cult for Boney M., lo the many years later. It was noted in one British tabloid that Farrell died “on the same day and in the same city” as Rasputin, who was the subject of one of Boney M.’s bugfuck brilliantly goofy tunes. Actually the Mad Monk died on December 29th (in one of the great fuck-up assassination stories of all time), but I think he might’ve, in his perverse wisdom, actually enjoyed the Boney M. tune that proclaimed him “Russia’s Greatest Love Machine!”

The only Boney M. song that I heard on AM radio back in the late Seventies here in NYC was “Rivers of Babylon,” which is indeed wildly catchy. It has been used effectively in movie soundtracks for years, most notably for me in the mostly music-less Jim Thompson adaptation Série Noire (1979) starring Patrick Deweare and directed by 2010 Deceased Artiste Alain Corneau:

The very first Boney M. hit was the memorably titled
“Baby, Do You Wanna Bump?” from 1975. However, the clip that makes me go into a state of camp overload is the minimalist disco exercise “Daddy Cool” from 1976:

In 1978, Farian released “Rivers of Babylon” backed with “Brown Girl in the Ring.” The fact that the latter song has the refrain “tra-la-la-la” over and over and over again (as well the other Boney M. hit that endlessly repeats "hi-di-hi-di-ho”) immediately makes me think of Neil Innes’ sublime “Mr. Eurovision Song Contest Man.” Then again, Innes was kidding — I’m not so sure about Farian….

I have a complete loyalty to “The Night Chicago Died” as the premier Euro Seventies song that got American history wrong but made a DAMNED fine pop record out of it, but I will begrudgingly admit that Farian’s demented take on the Ma Barker saga, inexplicably called “Ma Baker,” is pretty damned impressive too:

Some really crazy dancing from Farrell in this video, for the song “Boonoonoonoos” (don’t ask me, I can’t answer), which for some reason includes a major portion of the Van Morrison song “I Shall Sing,” which I know best from Art Garfunkel’s cover:

And since disco was all about doing strange stuff in strange ways, here’s Boney M.’s cover of the ultimate rock epic, “In-A-Gadda-Da-Vida”:

I truly must close out with my fave ridiculous song by the group, “Rasputin.” This song, and this video, are both wildly ridiculous ("Rah-rah Rasputin, lover of the Russian queen!"), and that’s why you should watch it NOW:

Once all vestiges of Boney M. disappear from the face of the earth, who will be left to tell the truth about Rasputin?