Peter Yates, who died at 81 last weekend, was yet another example of the many directors who made sterling, indelible work during the Nixon era, when Hollywood was willing to back “maverick” projects that were low-key, personal, and very character-driven. After that period ended, thanks to Jaws and Star Wars, these directors floundered, occasionally making great works, but primarily genre-jumping and making some sadly unsatisfying multiplex fare. Others, like Funhouse deity Robert Altman, kept making their kind of films by moving to other media, making smaller-budgeted truly independent features, and getting foreign funding.

Since I really don’t want to acknowledge the latter part of Mr. Yates’ career, which included such mainstream fare as The Deep (1977), Krull (1983), the Tom Selleck prison drama An Innocent Man (which I saw for review purposes, and man was it dreadful, but it did have a rather jarring line — for a Tom Selleck vehicle at least — about anal rape), and Year of the Comet (1992). Let’s talk instead about the “hungry” young British director who started with a Cliff Richard vehicle in 1963 (Summer Holiday), proceeded to direct several eps of The Saint and Secret Agent, and then moved on to make some truly memorable work in the “maverick” era.

The best-remembered Yates picture is without question Bullitt because it is a tight, lean specimen of the tough-cop subgenre that is less atmospheric and downright nightmarish than Dirty Harry, but is the most Steve McQueen-ish pic of all Steve McQueen pics. Yates' car chase set the standard for ALL the car chases to follow in the Seventies — and, believe me, there were plenty. Don Siegel himself had to acknowledge that car chases in cop movies were de rigueur by the mid-Seventies and would probably be looked back on with nostalgia in the future (how right he was).

I also have a major, major love for Yates’ John and Mary, the “singles” dating movie that draws on lessons from Godard and other Euro-gods (with a scene directly inspired by Band of Outsiders, plus the characters meeting through a discussion about Weekend). It also HEAVILY prefigures Annie Hall and Manhattan — I’m not saying Woody stole from it, but he definitely had seen it, I’ve always thought. 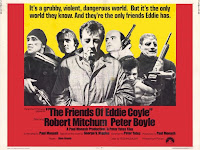 And lastly, the third “maverick”-era masterpiece by Yates was The Friends of Eddie Coyle, a low-key caper movie with Mitchum and a cast of terrific supporting performers including Peter Boyle. You can’t get much better than Eddie Coyle in the “neo-noir” category of updated fatalistic crime pictures. Mitchum was a wildly underrated actor, but only because he worked in so much garbage throughout his career. Eddie Coyle is a worthy bit of understated Mitchum that, luckily for us, is in distribution on DVD.

Yates did go on to make several fine pictures, including Breaking Away (1979) and The Dresser (1983) with the ever-awesome Albert Finney. His last pic was a James Spader-starrer called Curtain Call, which ain’t that auspicious but, hey, in the scheme of things it’s better than the terrifically talented John Schlesinger closing out his prestigious career with a Madonna rom-com (The Next Best Thing). A man’s gotta draw the line somewhere….

There are several clips from Eddie Coyle up on YouTube, but here is the trailer, which gives a good impression of the film’s low-key tone:

Posted by Media Funhouse at 2:39 PM

Check out this "The Friends of Eddie Coyle" tribute project we did. Play list includes: 5 videos - 2 recreated scenes, 1 Trailer, 1 Music Interview and behind the scenes photos. Please feel free to leave comments!
http://www.youtube.com/view_play_list?p=8171861DD8577ACA