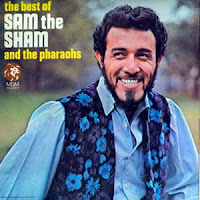 I brought a number (a big number) of my records back to my apartment from storage last weekend and indulged in a listening marathon that included one of my fave compilation albums, something called “Super Stars/Super Hits,” a two-record comp released in 1968 that was created by the CBS' direct marketing division. I purchased the set for 50 cents back in 1981 from a record-filled joint down on Broadway right near the Unique Warehouse (and how long has that emporium of fine weirdness been gone?). Anyway, this album is constructed like you’re turning an AM dial and “hearing” these hits from various genres: pop-rock, bubblegum, soul, garage, psychedelia, and mawkish ballads.

One of the tunes that always mesmerized me on that collection as a kid was “Ju Ju Hand” by Sam the Sham and the Pharaohs. In rediscovering the song, which does nick from “Woolly Bully” but seems to have its own deranged logic, Sam wails out some proto-New Orleans stuff about spells or something. Like any really great rock ’n’ roll, the song makes little sense, and it fucking shouldn’t. The lyrics online depend on how the listener heard the nonsense words, so you can find this version of the lyrics. Who knows which written lyric is correct and what the song means? Only Domingo Samudio himself, the man better known as Sam the Sham. And here is that song, still as awesome as when it was released in the mid-Sixties and I first heard it in the early Eighties:

Samudio definitely scored a garage/frat-rock anthem with “Wooly Bully” back in the 1965, but in re-listening to his Greatest Hits LP, I realized that he was some kind of missing link between Bo Diddley's truly “classic rock” of the Fifties and the Tex-Mex (and garage) artists of the Sixties. In trying to follow up “Wooly Bully,” he fell into the novelty-record biz, which happens to be another subgenre of pop-rock that I am fascinated by. His other biggest hit was “Little Red Riding Hood.” The follow-up was “The Hair on My Chinny Chin Chin,” and a tune that literally is an old comedy routine done as a song, “Oh That’s Good, No That’s Bad.”

It’s noted on the Net that Sam the Sham is back doing gigs these days, but mostly acoustic, from his homebase in Tennessee. If you want to see what he looked like in his prime, some great examples are on YouTube. Here the band does “Ring Dang Doo” (with an intro from the ever-clueless Ed Sullivan indicating that they had a big hit with “Hully Gully”):

If that ain’t rockin’ enough for ya, here the band does a song called “Go-Go Girl” on Hullaballoo, with some of the titular specimens on display. This is truly in Bo Diddley territory, but it is priceless, since the song is done live:

And there’s no other way to close than a live version of the group’s biggest hit, which is one of the greatest nonsense anthems EVER in rock ’n’ roll:

Posted by Media Funhouse at 3:49 PM