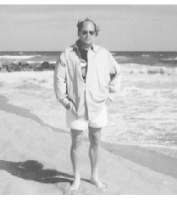 Some public access shows can’t be described, they just have to be seen. Such was the case with The Weather Report, a show hosted and produced by one Clinton Freeman, whom I had been informed died a few months back. I offer this slice of his show on YouTube as an example of access at its most creative, humorous (intentional and otherwise), and definitely strangest.

What “Video Clint” (as he at one time referred to himself on the show) did on his show was to deconstruct newspapers and magazine pieces (articles, ads, illustrations) by pointing out common themes. He was particularly obsessed with weather maps and would discuss them in much detail on the show, referring to how their existence in said periodicals provided references to his show. He had several other preoccupations, which included among others Britpop bands (and his hero Morrissey), very beautiful supermodels, gorillas, and bananas. The last-mentioned I believe was an oblique reference to the famous Warhol cover of the first Velvet Underground LP — Clint was obsessed with Warhol and at times seemed to indicate on The Weather Report that Andy was the inspiration for the show.

Clint had done a number of cable-access shows here in Manhattan. His first, The Four Horsemen, was done with friends and was pretty hard to fathom for those who tuned in casually (the participants wore suits and animal masks and made bizarre pronouncements); the phrase “self-aware” would pretty much cover that show. He returned on his own with shows called Lovecats and The Chair (at least I think it was called “The Chair” — perhaps it was “Electric Chair,” which would, of course, be another Warholian citation). In any case, by 1996, the time when this clip was shot, Clint had his own little world of references going on. It was very unique stuff and provoked fascination, laughter, or boredom, or a mixture of the three. See if you experience any of those reactions:

For the year 2000, access producers (working, very obviously, with no budgets) were faced with a minor dilemma: how to commemorate the new millennium? I wanted to do something about the history of film, but settled for a three-episode history of the film noir. For his show, Clint did “the best rock shows of the 20th Century,” which were revealed to have been the rock shows he had attended and liked the most. He held up tickets from the gigs, recalled stories about them, and told us about the venues they took place in. I can’t imagine that kind of content occurring in any other format than cable access (although, of course, YouTube has fast usurped a lot of the strangeness that used to find a home solely on access). Here is Clint’s obit in the New York Times. RIP, Video Clint, your like will not be seen again!
Posted by Media Funhouse at 11:33 PM

I remember this show. This was an age where Public Access was the Wild West of media. Clinton was on the forefront, gunning with some other shows like "Mad Dog's House of Young Lust" and "Cranberry Sauce." But his style was strange and unique, and made the entire concept of Public Access that more alluring.

Interactive television! You could call the 212-number on the screen and leave a voicemail, which might get aired at the end of one of his shows.

I am sad he is gone. He is a unique mold that brought something to this world that no one else can do quite the same - and perhaps no one should try.