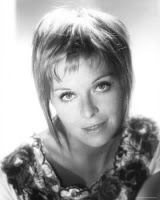 I was surprised to see that Susannah York was 72 when she died last week, but that was merely my mind having frozen her into her 20s/30s, since that was the age she was at when she made the films that have made the greatest impression on me. Her obits noted that her cute, short-haired blonde looks “fell out of favor” in British cinema come the late Seventies, and she was quite eager to play character parts in her later years. She remained a trooper, doing roles in movies, on British television, and (extensively) on the stage, including a one-woman show in which she incarnated the women of Shakespeare.

She was a top-notch actress, but began, yes, as a sex-kitten type in British film. She made her first big impression on American audiences in Tony Richardson’s superb Tom Jones (1963), where she shared flirtation scenes with the young and equally idyllic-looking Albert Finney:

She had earlier (in 1962) appeared in John Huston’s challenging and disturbing portrait of the father of psychoanalysis, Freud with Montgomery Clift. The whole film is available on YouTube, and it’s definitely one of Huston’s more ambitious pictures:

I love “Sixties movies” (read: transgressive heroes/heroines, parties, psychedelia, open or ambiguous endings), but will confess I’ve never seen Kaleidoscope (1966) and Duffy (1968), both of which feature York as the female lead. This scene from Duffy is a classic bit of “atmosphere” in which James Coburn dances with her at a trippy club:

I also haven’t seen Sebastian (1968) with York and Dirk Bogarde. It contains a nice acid freakout sequence, but York doesn’t feature in that. Here she is, again dancing in a hip, Swinging Sixties nightclub:

One of the most controversial pictures she starred in was Robert Aldrich’s The Killing of Sister George (1968). It’s a bizarre film that is very important, in that it was one of the first feature-length dramas about lesbianism. It contains a streak of the grotesque, in which Aldrich seems to be revisiting the territory he covered in What Ever Happened to Baby Jane?, plus it also adheres to the unspoken rule at the time that gay protagonists had to be tragic, haunted figures. I love Aldrich’s wildly subversive style, though, and so do recommend you check out the whole film, but if you want to see a key scene, this would be the one, as Beryl Reid is told off by Coral Browne, as ultra-cute gf Susannah York has to decide which older lady to stay with:

York’s most powerful scene, with Gig Young, in Sydney Pollack’s adaptation of the brilliant Horace McCoy novel They Shoot Horses, Don’t They? (1969). Change the milieu from a marathon dance contest in the Depression to the pathetic “reality TV” competitions of today, and you’ve got just about the same story, don’t you?

York was the female lead in the film adaptation of Kurt Vonnegut’s play Happy Birthday, Wanda June (1971). Contrary to what the YouTube poster and commenters say, it was never a Vonnegut novel, it was an original play. It’s noted that Vonnegut hated it, but I sorta like its claustrophobic staging of the play with its odd surreal moments. The boy in the film, Steven Paul, went on to make the most amazingly off-kilter (read: bad on a whole new level) Vonnegut adaptation, Slapstick of Another Kind:

When I had heard that York had died, I thought of my two favorite films in which she had starred. The first is Altman’s surreal thriller Images from 1972. It’s a hard film to synopsize, in that it concerns a woman who may or may not be losing her mind, but it features York as a children’s book author who begins to experience delusions about the men in her life. It is one of those films that Altman made because he wanted to make it, not because it had the slightest chance to do well at the box office:

The other film starring York that I love and rewatched several times is the American Film Theater adapation of Jean Genet’s The Maids (1975). She and Glenda Jackson play the servant sisters who plot to kill “the Madame” (Vivien Merchant), but also secretly wish to be her. It’s a brilliantly acted film and is also a sexy exploration of roleplaying and domination (although, of course, Genet had initially wanted young men to play the roles in drag). The film is available on DVD from Kino, and I recommend you check it out on disc, or for the limited time it’s up on YT, you can check it out there. Here is the trailer:

York was of course best known to American audiences in the last few decades as Superman’s mom in the Christopher Reeve movies, but I want to end this tribute on an “up” note from a film I believe has never played over here, an adaptation of Alice in Wonderland (yes, *another* one), called Alicja (1982). Made by Polish directors Jacek Bromski and Jerzy Gruza in England, the film features musical numbers, and here we have a disco-era bit of wonderment with Susannah York, Jean-Pierre Cassell, Lulu (who provided the voice of the film’s lead, Sophie Barjac), Paul Nicholas, and Freddie Mercury’s pal Peter Straker. The song is called “Talk Small” and yes, you won’t be able to forget the awful lyrics (including “They like imported cheese!”). It’s also too long and tacky as hell, so you need to watch it:

Posted by Media Funhouse at 6:39 PM