"The Man With the Golden Ear": Deceased Artiste Don Kirshner 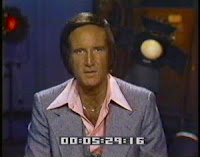 Don Kirshner was one of the last of those folks from behind the scenes who came out in front of the camera and became a very unlikely TV star. There were a number of personalities in the Fifties and Sixties who began as journalists or authors or DJs and became hosts of television shows — Kirshner started his stint as the monotone host of his own Don Kirshner’s Rock Concert in a much later era (the hip and “savvy” Seventies), hosting his series from 1973-81. He was indeed as flat as cardboard on the air, but his show presented musicians performing LIVE, which is more than Dick Clark could ever claim….

Kirshner was of course well known in the music industry long before he became a TV host. He began his “Aldon” music company in the early Sixties (with partner Al Nevins), and wound up employing the cream of the “Brill Building” group of songwriters: Pomus and Shuman, Mann and Weill, King and Goffin, Boyce and Hart, Neil Sedaka, and Neil Diamond. To be geographically correct, Kirshner’s office was up the block from the Brill Building on Broadway (if I remember correctly, it’s where the Mamma Mia theater now stands).

Kirshner never wrote or performed music, but he published some of the early hits of the songwriters mentioned above, and he produced several hit singles. When he was brought on board The Monkees TV project to find the band hit songs, he succeeded quickly in getting them two big singles (“I’m a Believer,” “Last Train to Clarksville”), but the band “fired” him when they wanted to take charge of the music themselves and were furious that the More of the Monkees LP had come out without their knowledge. The famous story has it that Michael Nesmith (wool-hat rebel!) smashed his fist into a hotel wall and told Kirshner, “That could have been your face!”

Here is a perfect example of what Kirshner gave the Monkees on their first album, a great piece of pop psychedelia from Carole King and Gerry Goffin, “Take a Giant Step”:

The song that supposedly was one of the “breaking points” for the band was “A Little Bit Me, A Little Bit You” by Neil Diamond, which was one of those tunes that came out without their approval. It’s still a damned fine pop tune (and no, Bobby Sherman wasn’t part of the production, he was just in this episode): 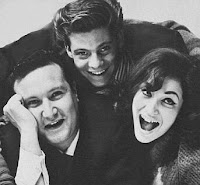 Kirshner’s next big move was to create a prefab band that couldn’t talk back to him, the studio creation “The Archies,” manufactured to debut on the Saturday morning Archie cartoon show. The “band” (which consisted of studio singers Ron Dante and Toni Wine, seen to the right with Don, and whomever else Kirshner corralled into recording under the moniker) had a few giant hits, including (of course) “Sugar, Sugar” and “Jingle Jangle”:

The last popular band Kirshner discovered was Kansas, but we’ll leave them aside to pay tribute to his TV show, which offered us genuine time capsules, like this live performance by Sly and the Family Stone:

UPDATE: This clip was taken off of YouTube by Andrew Solt's SOFA corporation, which evidently holds the rights to Don Kirshner's Rock Concert. They have pulled most of the clips from DKRC, but have thus far issued no DVDs of the program, nor have they put the shows up in any permutation on iTunes, Hulu, YT, or any of the usual websites. I guess they're hanging onto the shows, a la the Dick Clark empire, for future use in documentaries and in the meantime not allowing fans to share them. I understand a capitalist move like that under ordinary circumstances, but taking them all down right after Kirshner's death so fans can't commemorate Kirshner's contribution to TV rock history is an especially nice, Scrooge-ly touch. So much for your Kirshner tributes, bloggers! The SOFA folks need these tapes locked up in their library, nice and tight.

The Seventies continued on with Linda Ronstadt with the Eagles:

One of the only national TV appearances by The New York Dolls in their prime:

The Ramones, with a full wooden intro by Don!

I can think of no better way to close out a tribute to a leisure-suited gent who gave us some of the best music of the Seventies than with one of my personal faves of the decade, the Ramones’ “Rockaway Beach”:

UPDATE: Mike Nesmith posted a Facebook status acknowledging the wall-punching story: "Sad to learn of the passing of my old adversary Don Kirshner. He was a formidable foe and I send my condolences and sympathy to his family and his many friends. Donny, where ever you are — I want you to know I put my fist thru the wall just for dramatic effect. Apparently it worked. It is all behind us now, and we wrote what we wrote. Rest in Peace." Thanks to Krys O. for passing this on.
Posted by Media Funhouse at 12:04 AM

Actually, I think this difficulty of access to the music was good in many ways...it allowed for bands to develop their own styles and approaches, isolated in their own locales, and music fans had to be somewhat more committed to seeking out that which was interesting or unusual or new. I used to read ROCK SCENE magazine and just sort of imagine what the bands sounded like from looking at the photos and reading the brief, almost gnomic descriptions. I fell in love with the Ramones without hearing them, when I read an article about them by Richard Hell that was published in HIT PARADER before their album came out. In it was published the lyrics to "I Don't Wanna Go Down To The Basement" which, aside from being cool and kooky lyrics in their own right, spoke to certain fears I had had as a youngster when we lived in a house in the midwest with a basement. (Later, we moved to Florida, where homes do not have basements.)

I discovered other bands at the time similarly, either by reading about them in CIRCUS or CREEM or elsewhere, or just taking a chance on an album that looked intriguing by virtue of the band's name or appearance or the album cover.

Anyway, I used to watch THE MIDNIGHT SPECIAL and DON KIRSHNER'S ROCK CONCERT for those rare occurrences where interesting bands would appear amidst the dreck of the 70s. The most electrifying discovery I made via Don Kirsher was THE SENSATIONAL ALEX HARVEY BAND. When this band, whose name connoted to me a dreary boogie band a la Status Quo or Foghat, came out and started with VAMBO, I was riveted. The next day I called around and found one record store in town that carried their then current album, THE IMPOSSIBLE DREAM. I headed in and picked up their sole copy, and I remain an Alex Harvey Band fan to this day.