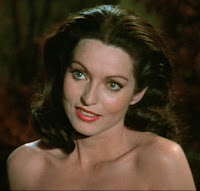 If you look Marie-France Pisier up on the IMBD, you find out only two things about her 66 years of existence. The first is that she was born and lived in Vietnam (where her dad was the colonial governor of French Indochina). And you can learn the size of her chest, courtesy of Celebrity Sleuth. It’s pretty sad that those two facts represent the sum total of her life, but then again, the IMDB is composed of fan-generated material, so what would you expect?

Pisier, who was found dead earlier this week in her pool at the age of 66, was a gorgeous actress who worked on a continual basis in France, but the films she appeared in stopped being exported over here in the mid-’80s (with the sole exception of Raoul Ruiz’s Time Regained). Thus, what I can speak about knowledgably is the period where Pisier worked for noted French directors and made some really bad American crap. 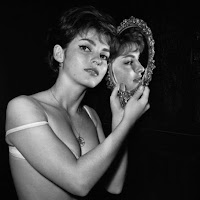 Her obits labeled her a “darling” of the New Wave, which isn’t exactly true — she worked for only two of the movement’s filmmakers. But I guess if Francois Truffaut leaves his wife and kids to have an affair with you, you become a "New Wave darling" in some respect. Truffaut did indeed do that after he cast her in his first 400 Blows sequel, the short film “Antoine et Colette,” which appeared in the feature Love At Twenty (1962). You can see the whole short, featuring the lovely young Mademoiselle Pisier, here:

Pisier had the lead female role in Robbe-Grillet’s stylish and typically dreamy Trans-Europ-Express (1966) and also was one of many haute bourgeoisie acting as if caught in a dream in Don Luis Bunuel’s very non-linear Phantom of Liberty. However, Pisier did more than act in certain films — she also collaborated on scripts and directed the feature The Governor’s Ball (1990).

The first film she collaborated on both behind and in front of the camera was Jacques Rivette’s ultra-dreamlike (are you sensing a pattern here?) masterwork Celine and Julie Go Boating (1974). She appears in the "house of stories" sequences where three figures enact a cryptic drama that our heroines are trying to figure out. I excerpted scenes from the film in the Funhouse episode I called “Farewell, New Yorker.” Here is the C&J segment:

Follwing her tremendous success in the popular comedy Cousin Cousine (1975), Pisier appeared in some really campy American soaps. The French Atlantic Affair (1979) and Scruples (1980) have been forgotten by most folks, but The Other Side of Midnight (1977) is a very well-remembered piece of absolute camp silliness. Here is the trailer:

Pisier continued to appear in films with “international appeal,” like French Postcards (1979) and Chanel Solitaire (1981), but perhaps her most interesting performance — especially given her past history with the filmmaker — was her return as “Colette” in the final “Antoine Doinel” film by Truffaut, Love on the Run (1979). Not only did she costar as Leaud’s old love, but she also coscripted with ex-lover Truffaut. The whole film is available on YouTube, but the poster has made certain that the clips can’t be embedded — I guess this helps keep the copyrighted footage up on the site, because he/she has done the same with their other foreign movie uploads, and the suckers have been up there in some cases for years now! Love on the Run begins here.

She made many high-profile pics after the Seventies but, as noted above, we didn’t see many of them over here. One that did appear briefly, but has disappeared over the last few decades (I finally caught up with it on TV5, with English subs) is the star-studded Les Soeurs Bronte (1979, again!), which is Andre Téchiné's surprisingly old-fashioned take on the lives of the Bronte sibs (brother Branwell included). The whole film can be found on YT here, but the version uploaded is in French with Spanish subs. 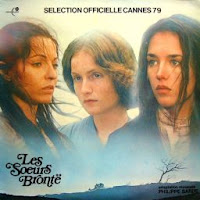 Pisier plays the sister who lived the longest, Charlotte (thus allowing her to take part in the “is that all?” finale to the film). Téchiné definitely frames the film as a 1940s-style melodrama, thus making it a very fitting companion to the 1946 Bronte pic Devotion with Olivia de Havilland and Ida Lupino. The thing that makes the pic interesting today, of course, is watching the interaction of the three lead actresses. The immaculately talented Isabelle Huppert (then 26) had already appeared in several major films by ’79, but her turn as Anne finds her going through the least-glamorous process of suffering (and as we all know, biopics like these thrive on the lead characters’ suffering). The radiant Isabelle Adjani (then 24) plays Emily, dressing as a male and acting as idiosyncratic as her “brutish” writing. As Charlotte, Pisier is seen as equally troubled, but still functions as the family’s backbone.

The scene that probably best displays the trio’s interaction is this one (oddly squeezed on YT, but English-subbed) in which Charlotte discovers a poem by Emily and tells her she must publish it:

I saw her at the The Other side of Midnight", I agree it was silly but I don't know why I remember her clearly.
Nice blog you have.
You should change the comments for a pop-up window. It is easier to make comments.
:)